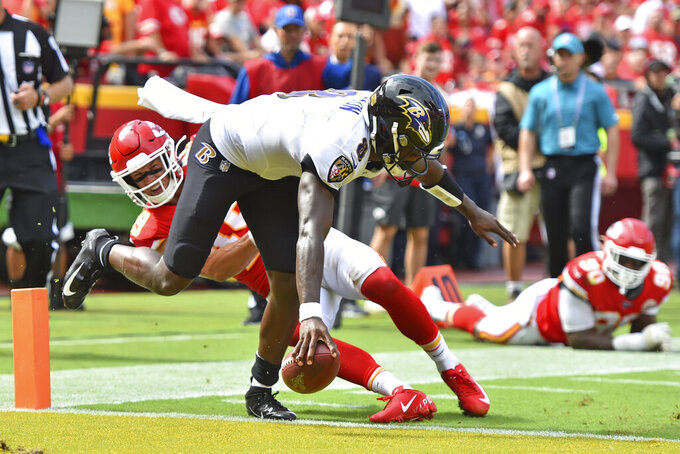 BEREA, Ohio (AP) — Lamar Jackson has as many cool moves as Justin Timberlake.

Like the pop sensation on stage, Baltimore's do-it-all quarterback shimmies, shakes and jukes on the field. He changes directions on a dime, performs 360-degree spins and avoids trouble with a stutter step.

He's yet to show off a moonwalk, but don't put one past him.

With breathtaking ease, Jackson can seemingly do the impossible while running with the football. All it takes is the slightest twist or turn, and Jackson can bust open a defense or break a cornerback's ankles. He's a human highlight.

As the Browns (1-2) prepare to face Jackson and Ravens (2-1) on Sunday, Cleveland defensive coordinator Steve Wilks said the best way for him to get his unit ready for the shifty, dual-threat QB is in a seated position.

There's nothing funny about trying to contain Jackson, who each week seems to silence more of those critics that thought he'd be a bust, called him one-dimensional or a running back trying to play quarterback.

"To be honest, he is probably the closest thing that I have seen since Michael Vick," Wilks said, referring to the retired star who electrified the NFL. "This guy is extremely dynamic. He can make plays when you do not think there is a play there to be made. He is just Houdini, I guess."

An escape artist in shoulder pads and cleats. One second he's there. The next, he's gone.

Last week against Kansas City, Jackson left several Chiefs defenders grasping at air in the Ravens' 33-28 loss. On one play, Jackson hesitated to freeze Chiefs defensive end Alex Okafor, who was rendered helpless and simply dropped to the turf on his rear end.

"He's wild, man. He's amazing," said Ravens running back Mark Ingram. "I don't think there is anything like him in the league, as far as just extending plays and being able to juke defenders. He's special. Sometimes he's scrambling, and we're all out there like, 'Do we block? Do we try to get open?' You're trying to be there for him, but he's just doing crazy stuff. He can extend plays and buy time for us to get open, receivers to get open, or him take off and run at the last resort and juke people, spin around people, make people fall.

For the Browns to have any chance of winning in Baltimore, where they are just 2-10 since 2007, the key is controlling Jackson.

Jackson opened the season by throwing five touchdown passes and posting a perfect 158.3 rating in a win over Miami. He's ranked among the league leaders in TD passes, and it seems strange to see him listed in several other passing categories with names such as Brady, Mahomes and Prescott.

Jackson wasn't supposed to be able to throw, remember?

Well, the 2016 Heisman Trophy winner has completed 63 percent of his passes for 863 yards and seven touchdowns. He's also attempted 221 consecutive passes without an interception, the league's best current streak.

"Him working out in college, you knew he had it in him," Kitchens said. "It is just getting the consistency out of him. I think they are getting more consistent play from that aspect out of him now, which makes him more dangerous and harder to defend."

But it's that ability to avoid the rush, leave the pocket, tuck the ball and go that separates Jackson from virtually every QB in the league — present and past.