Russell Wilson expects to have input on Seahawks' next OC 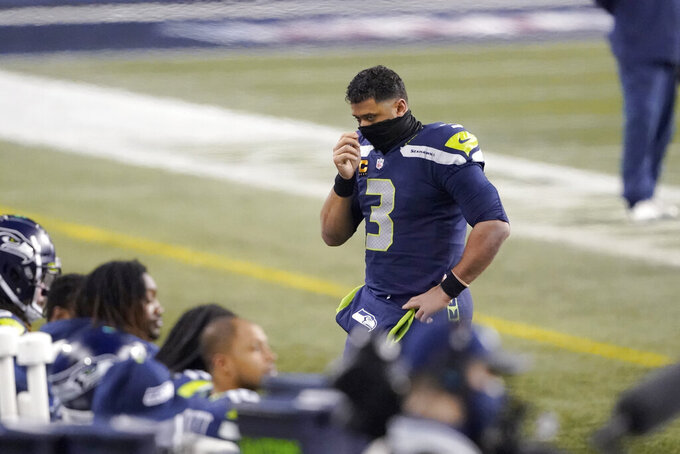 Seattle Seahawks quarterback Russell Wilson (3) looks toward his bench near the end of the second half of an NFL wild-card playoff football game against the Los Angeles Rams, Saturday, Jan. 9, 2021, in Seattle. (AP Photo/Ted S. Warren)

Wilson said Thursday that he will miss working with Schottenheimer.

“Me and Pete have been talking about, (general manager) John (Schneider) too as well, but just making sure that we get all the options possible and find the best person that can help us win Super Bowls,” Wilson said. “Not just win games, we’ve won a lot of games, but the reality is ... we want to win more Super Bowls. That’s the fun part.”

Seattle's postseason ended last weekend with a 30-20 loss to the Los Angeles Rams in the opening round of the NFC playoffs. Seattle announced a few days later that Schottenheimer would not return for a fourth season as offensive coordinator. The team cited philosophical differences with head coach Pete Carroll.

But the season was filled with inconsistency. Seattle’s offense was among the best in the league for the first half of the season and Wilson was in the middle of the MVP conversation. That changed midway through the year and the Seahawks struggled badly at times over the final eight games.

After the loss to the Rams, Carroll and Wilson noted that Seattle’s struggles to make offensive adjustments to opposing defenses contributed to the problems later in the season. Even with his critical comments about how the offense operated, Wilson said he did not want to see Schottenheimer go.

“Was I in favor of it? No. It wasn’t my decision to change. Coach Carroll made that decision. I trust his decision,” Wilson said. “But at the same time (Schottenheimer) and I have been so close. I think he’s going to be a tremendous coach somewhere else. But what I am in favor of is our football team getting better.”

Carroll said Monday that he wanted to have a more effective running game, which would seem to run counter to an offense that relies more on Wilson’s arm. Carroll’s implication wasn’t that Seattle would be a run-dominant team, but running the ball regularly and efficiently and supplementing with quick passes and occasional deep shots seemed to be the direction he wants to go.

The first half of the 2020 season was one of the few times since Wilson’s arrival that Seattle went pass heavy. Seattle averaged 37 passes to just 24 runs for the first eight games of the season. Wilson had 28 touchdowns and eight interceptions and averaged nearly 300 yards per game passing.

The second half of the year, pass attempts dropped by four, running attempts went up by three, but most notable was a significant dip in Wilson’s yards (194.5) and touchdowns (12).

All of that makes hiring an offensive coordinator one of the more important personnel decisions during Wilson’s tenure. He’s had just two coordinators with the Seahawks — Darrell Bevell for six seasons and then Schottenheimer for the past three.

“I’m going into my 10th year of my career. The next 10 years are super critical right for everybody involved in the whole organization and me as a player,” Wilson said. “The legacy that I want to be able to create, and do and to be able to set the tempo on. So I think it’s vital, it’s critical, super significant that obviously that we’re part of that process.”