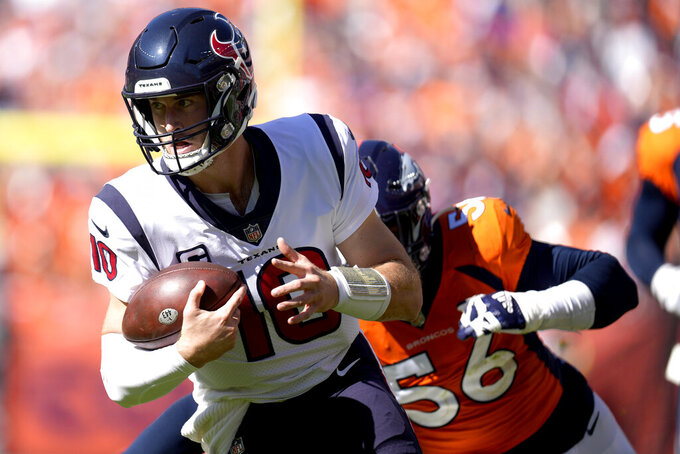 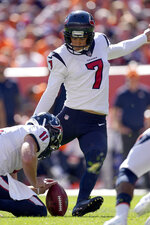 DENVER (AP) — Russell Wilson overcame a slow start and a cascade of boos in his Denver debut Sunday to lead the bungling Broncos past the Houston Texans 16-9 for rookie coach Nathaniel Hackett's first NFL win.

For much of the day, it was just as unsightly as Wilson's return to Seattle six days earlier, replete with a hostile crowd, problematic play calls, red zone quicksand and a profusion of head-scratching penalties.

"All I really care about is the cheers at the end,” Wilson said, “because we won.”

The Broncos (1-1) were flagged 13 times for 100 yards, giving them 25 penalties on the year, their most ever in back-to-back games.

But they pulled it out on defense, holding Houston (0-1-1) to a trio of field goals by Ka'imi Fairbairn.

After completing just six of his first 20 throws, Wilson went 4-for-4 on the Broncos' go-ahead scoring drive that featured a 35-yard strike to a wide-open Courtland Sutton and a 22-yard payoff to tight end Eric Saubert that put Denver ahead 13-9 early in the fourth quarter.

“We're of the ‘always improving’ mindset,” Saubert said. "So, we're going to keep getting better every single week. It’s scary what we can do. You know, we get rid of those penalties, we execute in the end zone, we’ll be a really good team.”

Wilson finished 14 of 31 for 219 yards with one TD and an interception. He followed up his only TD throw with a clock-chewing drive that ended with Brandon McManus’ 50-yard field goal with 3:41 remaining for the final margin.

Davis Mills had the Texans on the move when Randy Gregory registered his first sack for the Broncos just before the two-minute mark to help stall Houston's bid to tie it.

The Texans came in as 10-point underdogs but made the Broncos and their crowd sweat out the possibility of an 0-2 start under Hackett, who had a number of problematic play calls a week after drawing widespread ridicule for taking the ball out of Wilson's hands and attempting a 64-yard field goal in the final minute of a 17-16 loss at Seattle.

Six days after getting mercilessly booed in his return to Lumen Field, Wilson heard the boo-birds at home when he completed 6 of 19 passes in the first half that ended in a 6-6 tie and again when he threw an interception on his first toss of the second half.

Wilson got a huge ovation when he ran out of the tunnel and through the smoke, but the love didn't last long as a series of dropped passes and misfires stoked the crowd.

On one of Wilson's incompletions, the Broncos lost wide receiver Jerry Jeudy to a rib injury that the team initially said was an injured right shoulder. It's the second straight September that Jeudy has gotten hurt; he missed two months last season after spraining an ankle in the opener.

The Broncos also lost star cornerback Patrick Surtain II to a shoulder injury and he was replaced by rookie Damarri Mathis, who had five tackles and broke up a pass.

After going 0-for-4 in the red zone at Seattle on Monday night, the Broncos twice drove inside their opponent's 5-yard line in the first half only to come away with field goals.

In the first quarter, Wilson had three incompletions from the Texans 2, including one where Sutton failed to get his left foot down inbounds.

Just before halftime, Wilson threw incomplete to Javonte Williams at the goal line from the 5 when it appeared he could have run it into the end zone himself. Then, after Williams bullied his way to the 1, Wilson lined up in the shotgun and had to throw the ball away, bringing McManus on again for a 24-yarder that tied it with 20 seconds left.

“The reality is we have to play better,” Wilson said.

Fairbairn's 24-yarder put the Texans up 9-6 after linebacker Christian Kirksey wrested the ball from Sutton at the Denver 45-yard line on the second play of the second half.

The Broncos' infractions included a pair of delay-of-game penalties on field-goal attempts. Their four delay penalties so far are twice as many as they had all of last season.

Denver also was whistled for too many men on the field. And the Broncos had to call timeout when they had too few players on a punt — and that missing man was rookie punt returner Montrell Washington.

“We've got to get better at finishing games,” Texans left tackle Laremy Tunsil said after Houston failed to do so for the second straight week. “Once we do that, we'll be a great team.”

Texans running back Dameon Pierce said it's just a matter of sustaining the strong starts: “We were playing at the level about what we need to play, but we just couldn’t pull that rabbit out the hat in the end.”

Unlike Wilson and the Broncos.

Houston LB Kevin Pierre-Lewis (groin) left in the third quarter and DB Derek Stingley Jr. left with an unspecified injury. Hackett had no postgame updates on Jeudy or Surtain.

The Texans visit Chicago on Sunday.

The Broncos host the 49ers on Sunday night.