Russell Wilson ushers in new Broncos era, in a hurry to win 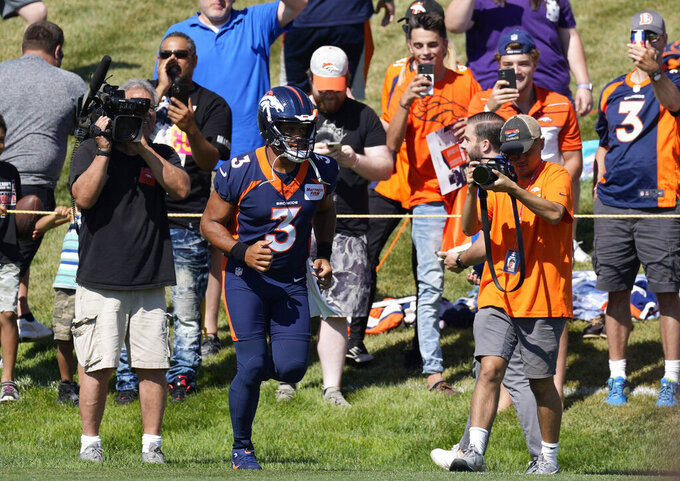 “We've got a championship-caliber football team,” the Broncos' new quarterback declared Wednesday after what he termed a “ great first day ” at training camp with his new teammates, coaches and playbook.

Wilson isn't interested in patiently engineering a turnaround for a franchise that hasn't reached the playoffs since Manning recited his final “Hurry! Hurry” call in Super Bowl 50 more than six years ago.

He cited the team's mixture of youth and experience, speed and skill. And he had particular praise for the Broncos' work ethic after so many of his teammates gave up their last vestiges of summer vacation to gather with him at his estate last week in San Diego to refine routes ahead of training camp.

“Jerry Jeudy was in our QB meeting for an hour just for fun, just to listen and study and understand it all," Wilson added. “So, it's a credit to him and his work ethic. When your best players put that kind of work it, that just raises everybody else.”

The Broncos haven’t had a winning record since 2016. And general manager George Paton said Tuesday that he welcomes the buzz that surrounds his team following the hiring of rookie coach Nathaniel Hackett, the electrifying acquisition of Wilson for a package of picks and players — and the pending $4.65 billion purchase of the franchise by Walmart heir Rob Walton.

“We know expectations are higher than they’ve ever been here. We’re not blind to that. We embrace expectations,” Paton said. “But we have a long way to go.

"We haven’t won here in five, six years. We won seven games last year. We’re 0-0 now. The work starts now, a lot of work to be done. I know we’re going to embrace the process, and I look forward to the journey with Coach Hackett, with this team, and everyone involved.”

As far as Wilson is concerned, he sees no reason why that trek can't reach State Farm Stadium in Glendale, Arizona, where Super Bowl 57 will be held in February.

While Paton won't go that far just yet, he touted the team's core and trajectory.

“Anytime you get a franchise quarterback, a Super Bowl-winning quarterback, like Russell Wilson, it’s going to accelerate anything that you’re doing,” Paton said. “It wouldn’t have done any good to bring Russell in here if we didn’t have a foundation in place.”

One thing Wilson apparently isn't in a hurry to do is sign a contract extension. He has two years left on his current deal that pays him $19 million this upcoming season and $22 million next year. Wilson's new deal is expected to top $250 million over five years, but Paton demurred when asked for a timeline.

“We all want Russell here a long time,” Paton said. “Out of respect for his team and our team, we’re going to keep it in-house any discussions we may or may not have ... at the right time, we’ll get a deal done.”

Last week, Kyler Murray agreed to a deal with the Cardinals that adds five new years and up to $230.5 million in new money, and Baltimore QB Lamar Jackson appears in line for a mega-deal.

“I don't really worry about those guys and what they're doing. It's awesome for them,” Wilson said. “But it has nothing really to do with me. I'm excited to be here, I know that. I know I want to be here for a long, long time, hopefully the rest of my career."