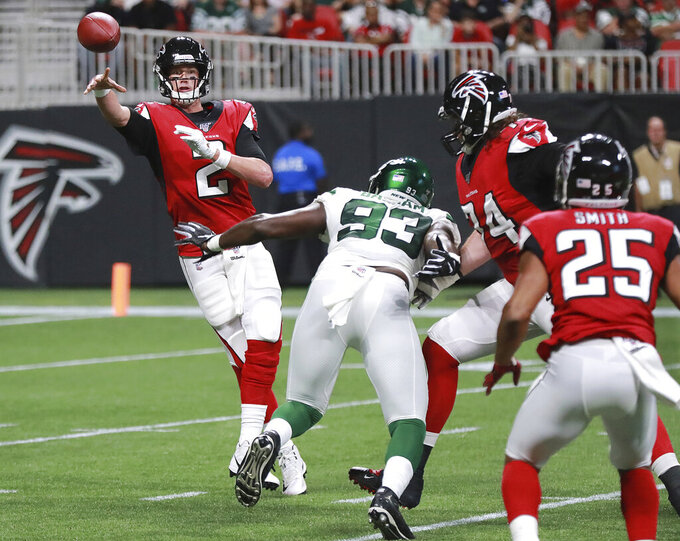 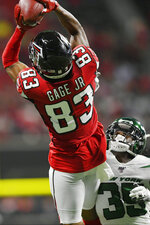 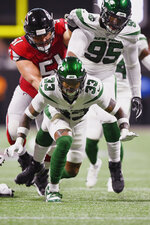 Ryan looked sharp in his preseason debut for the Atlanta Falcons, completing nine straight passes, and Darnold led New York on another scoring drive in the Jets' 22-10 victory Thursday night.

After sitting out the first two exhibition games, Ryan played most of the first half. He completed 10 of 14 passes for 118 yards, a performance that was even more impressive considering Brian Hill and Justin Hardy dropped back-to-back passes in the back of the end zone that should have been touchdowns, sparking boos from the meager crowd at Mercedes-Benz Stadium.

"It's always exciting to get those first few series under your belt," Ryan said. "Knock the rust off and get your feel back."

The Jets (1-1) are certainly pleased with Darnold, who followed up a marvelous drive in the preseason opener by completing 5 of 7 passes for 46 yards. He guided New York on a 66-yard touchdown drive to start the game, capped by Ty Montgomery's 1-yard scoring run.

"It looks right," coach Adam Gase said of Darnold's performance. "He doesn't seem to have any complications."

Le'Veon Bell sat out again for the Jets. He could make his New York debut next week.

Atlanta's backup quarterback, Matt Schaub, took over for Ryan and led the Falcons (0-3) on their lone touchdown drive to close out the first half. Running the two-minute offense to perfection, Schaub went 8 of 10 for 76 yards to set up Ito Smith's 4-yard touchdown run with 33 seconds remaining.

It was a tougher night for the kickers.

New York's Taylor Bertolet, who was signed last weekend after Chandler Catanzaro missed two extra points in the preseason opener and surprisingly retired, botched a pair of PATs to raise more concerns. Bertolet did connect on a 49-yard field goal in the third quarter.

Giorgio Tavecchio, taking over in Atlanta after the release of longtime kicker Matt Bryant, missed a pair of 52-yard field goal attempts. One appeared to be deflected at the line, the other sailed wide left.

Atlanta's third-string quarterback, Matt Simms, had the ball knocked away for a fumble that led to New York's winning score. The Jets' fourth quarterback of the night, Luke Falk, connected with Deontay Burnett on a 9-yard touchdown pass with 11:38 remaining.

James Burgess finished off the Falcons by intercepting a pass from Simms and returning it 28 yards for a touchdown.

Jets: It was a brutal night for New York. RT Brandon Shell was in uniform but didn't play because of an ailing knee, LB Avery Williamson was knocked out of the game late in the first half with a knee injury, and LB Jamey Mosley hurt a knee as well. The Jets already were missing CB Trumaine Johnson, who is sidelined indefinitely with a hamstring injury that has created major concerns in the secondary.

Falcons: CB Damontae Kazee left the field on the Jets' opening possession with a rib injury. But Atlanta's most pressing concern appeared to be WR Russell Gage, who went down hard on his hip after letting a slightly underthrown pass from Ryan slip through his hands. Gage spent several minutes writhing on the turf in pain before he walked gingerly to the locker room assisted by a pair of trainers.

Despite another shaky kicking performance, Gase said the Jets are sticking with Bertolet.

"Right now, this is where we're at. This is what we're going with," the coach said. "When we get back in the morning, we'll be able to watch the film, make sure the operation was right, figure out what the reason was for those misses."

The Falcons clearly have some issues to clear up on the offensive line.

Ryan was sacked three times and hit on at least a half-dozen occasions after delivering the ball.

"You're getting all different looks in these games," Ryan said. "We'll be better off for it."

The Falcons are approaching three years without a preseason victory.

Atlanta has lost 11 straight exhibitions since its last win — a 17-15 triumph over the Jacksonville Jaguars on Sept. 1, 2016.

Jets: Return home to face the New Orleans Saints in their next-to-last preseason game on Aug. 24.

Falcons: Host Washington in the fourth of five preseason games next Thursday.