Ryan not looking at future implications of Falcons' firings 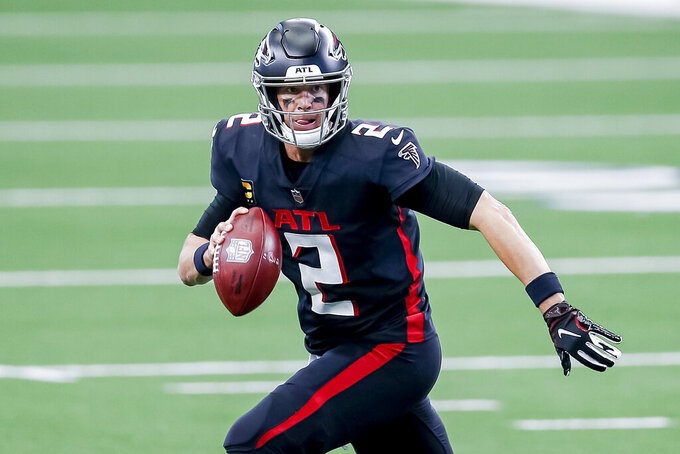 FILE - In this Sunday, Sept. 20, 2020, file photo, Atlanta Falcons quarterback Matt Ryan (2) looks to pass during an NFL football game against the Dallas Cowboys in Arlington, Texas. Ryan isn't allowing himself to wonder if the ouster of the Atlanta Falcons' coach and general manager this week could lead to a roster overhaul following the season that could impact his career. (AP Photo/Brandon Wade, File)

ATLANTA (AP) — Matt Ryan isn't allowing himself to consider if the firings of the Atlanta Falcons' coach and general manager this week could lead to a roster overhaul following the season.

The 35-year-old Ryan's future as the Falcons' quarterback could be at stake if the full-time replacements for coach Dan Quinn and general manager Thomas Dimitroff decide it's time to rebuild the roster.

The Falcons are 0-5 following back-to-back losing seasons, so there is no guarantee a new full-time coach and GM will want to keep the core of the team together.

Following Wednesday's first practice with interim coach Raheem Morris, Ryan said the focus must be on winning Sunday's game at Minnesota. He says it’s too early for him to look past the season.

“I can’t worry about that yet,” Ryan said. “It’s not like we’re making this transition and it’s the end of December. We’re in the middle of October. We have 11 games in front of us. Worrying about those things is going to distract us as a player from what we need to do and that’s prepare for the Minnesota Vikings this weekend.”

Quinn and Dimitroff were fired on Sunday night. On Monday, team owner Arthur Blank discussed the firings and was asked about Ryan's plan to play until he is 40 or older. He said decisions about Ryan and other veterans would be made by the new leadership.

“I love Matt much like I love Dan and love Thomas,” Blank said. “Matt has been a franchise leader for us. ... I hope he’s going to be part of our plans going forward, but that will be a decision I won’t make.”

Ryan, who was Dimitroff's first NFL draft choice in 2008, is in his 13th season with the Falcons. He was the NFL Offensive Player of the Year in 2016 after leading Atlanta to its second Super Bowl appearance.

Blank said a new coach and general manager “are going to want to know they have a degree of freedom to do their jobs.” That includes making the most important roster decisions.

Ryan has not thrown a touchdown pass in two consecutive games. For the season, he has seven TD passes with three interceptions.

“I think we’ve moved the ball pretty well between the 20s,” Ryan said. “We haven’t scored the way we need to score the last two weeks. That’s what we’ve got to fix.”

“He’s obviously different from Dan, he’s a different guy, different personality," Ryan said. "It’s going to be our responsibility as players to buy in and do what he’s asking us to do and give everything we’ve got the remainder of this season.”

The Falcons released a thank you statement from Quinn, who said “How fortunate am I that I close this chapter the very same way I opened it — with gratitude.” Quinn said coaching the Falcons for six seasons “has been the privilege of a lifetime.”

The Falcons are adjusting to more than the coaching change.

There were new “intensive” safety guidelines imposed by the NFL at their practice facility after the team placed rookie defensive tackle Marlon Davidson on the Reserve/COVID-19 list on Tuesday. Teams are not allowed to announce if a player tested positive or was exposed to someone who tested positive.

Ryan said all meetings were “completely virtual” on Wednesday with players “all in separate rooms and in our own space.” Players wore shields on their helmets in practice.

“I think we’re doing everything we can to try and keep it at bay and do the best we can under the guidelines we’ve been given, but those guidelines for sure changed this week,” Ryan said.