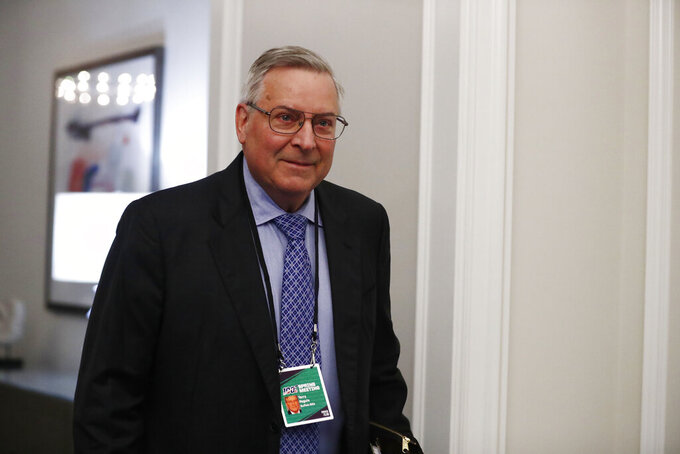 FILE - In this May 22, 2019 file photo, Terry Pegula, arrives to the NFL football owners meeting in Key Biscayne, Fla. Rather than fullfilling his promise of delivering Buffalo a championship, Pegula has instead overseen a team that's endured fitful starts and stops, gone through a revolving door of players and coaches, and is in the midst of a franchise-worst eight-year playoff drought, the NHL's longest active streak. (AP Photo/Brynn Anderson, File )

VANCOUVER, British Columbia (AP) — Terry Pegula leaned into the table and got directly to the heart of the matter when assessing the more downs than ups he has experienced over eight-plus years of owning the Buffalo Sabres.

"The one thing I think about is it's time to start winning. That's why we're here," Pegula said during an interview with The Associated Press while sitting next to his wife and team president, Kim, a few hours before the start of the NHL draft in Vancouver.

"We have Ralph on board and some young players, leaders, Jack," he said, referring to newly hired coach Ralph Krueger and team captain Jack Eichel. "So it's time to put it all together."

It hasn't been an easy run for Pegula, who made his fortune in the natural gas industry, and captured the city's imagination upon arriving in Buffalo in February 2011 by tearing up at the sight of onetime Sabres great Gilbert Perreault attending the owner's inaugural news conference.

Rather than fulfilling his promise of delivering Buffalo a championship, Pegula has instead overseen a team that has endured fitful starts and stops, gone through a revolving door of players and coaches and experienced a franchise-worst eight-year playoff drought — the NHL's longest active streak.

Pegula, who purchased the NFL's Buffalo Bills in 2014, isn't at all happy with the results regarding the Sabres, a team he grew up rooting for and a franchise set to celebrate its 50th anniversary next year.

"You're never happy with where you are in life, at least I never am," he said.

And yet, as difficult as it has been, Pegula refused to give in to frustration during a wide-ranging 20-minute interview. He's an optimist by nature.

"I'm a firm believer (of) if you think negatively, you're going to end up that way. ... You have to be positive," Pegula said, while acknowledging that mistakes were made. "I don't take any of these poor results we've had as a team, I don't take that personally. I just try to get better."

Kim Pegula, who works hand in hand with her husband, added her perspective.

"Obviously, no matter what you do, you always make mistakes. But I feel like they all lead to something else," she said.

"At the time you always think you're doing what you think is right with the information you have. But now as we sit here, all those steps, whether they were mistakes or not, is kind of where we are now," she added. "You can't think they're all bad because we've got Jack (Eichel), we've got (Jeff) Skinner, we've got (Rasmus) Dahlin. ... So all that wouldn't have happened if other things didn't happen. Sometimes, they were mistakes, but they're not."

There is renewed hope for the Sabres, who are starting over at coach again with Krueger replacing Phil Housley, who was fired after two seasons. The 59-year-old Krueger has an extensive resume in and out of hockey and comes to Buffalo after spending the last five years as chairman of English Premier League soccer club Southampton FC.

Pegula said he was immediately impressed with Krueger's worldly background and philosophies.

"There was a feeling when Ralph came in the room that it was almost a presence. It was like, 'Well, this guy's different,'" he said. "We started talking to Ralph and we didn't want to leave. I took so many notes, I stopped taking notes because Ralph's a quote machine."

Pegula was particularly impressed by Krueger's decision to visit Buffalo and spend time talking to fans in bars while watching the NHL playoffs to get a sense of the city.

Krueger's reputation for being a motivator and his loose ties to general manager Jason Botterill has the Pegulas believing they might finally have the right tandem overseeing the team.

The Sabres are on their third GM and fifth coach since the Pegulas took over. And that doesn't include Pat LaFontaine's four-month stint as team president before he abruptly resigned in 2014.

For all the hundreds of millions of dollars the Pegulas have committed to player contracts, coaches, scouts, training staff and remodeling the locker room and players' area, very little has translated into wins.

The Sabres have finished last in the overall standings three times in the past six years. That included bottoming out in 2014-15 for a chance to secure the right to draft either Eichel or Connor McDavid, who was taken first by Edmonton.

Just don't call what the Sabres did "tanking" when bringing up the failures of the past.

"First off, the word you just referred to, the 'T word,' is rebuild," Pegula said. "Losing is the most painful thing. When you go through a rebuild, you would still like to continue winning. Yeah, you're right, that history's there. But there's always good in something bad, so keep going."

Added Kim Pegula: "I don't know there's any team that hasn't had their share of mistakes and changes. Those just happen to be ours."

"To me, everything's pointing up," he said. "Our players want to start winning. They're not in this for what's happened the last three or four seasons, so I feel for them, and I'm pulling for them to work with our coach, work with management and turn it around."

The Pegulas pointed to how the Sabres matched a franchise record with 10 straight victories in November before collapsing, winning just 16 of their final 57 games.

"There's something there. They showed that. It's not hopeless at all," Kim Pegula said.

Terry Pegula noted the Sabres were leading the league with a 17-6-2 record before the wheels fell off.

"Don't even ask me the question what happened because I don't know. Obviously, it wasn't a good thing because we started losing more than we should have," he said. "They were a really good hockey team that had found the way to win games. They were young and lost that magic. So this year, hopefully, it lasts the season."

For being one of Buffalo's most prominent couples, the Pegulas rarely speak publicly.

Terry Pegula acknowledged one the most unexpected realities that come with being owners is how much attention they receive and the criticism that comes with the role.

But he is encouraged that attitudes in Buffalo have changed for the better regarding the Rust Belt city's hard-luck reputation and its two franchises known mostly for big losses.

The Sabres lost in both their Stanley Cup Final appearances. That includes 1999, when Brett Hull scored the Dallas Stars' Cup-clinching goal in triple overtime of Game 6 despite having his skate in the crease, which the NHL allowed to stand based on a previously unannounced change in the rules.

The Bills are best known for their four consecutive Super Bowl losses in the 1990s.

"That's the one thing that really annoyed me probably more than anything when we first got to Buffalo, everybody talking about: 'Poor us. Poor Buffalo,'" he said.

"I'm thinking like: 'What are these people talking about? Be proud of your area and your city,'" Pegula said. "I've noticed that has changed in the last eight years. That talk has stopped. So at least we're trending."

Pegula paused, smiled and looked to his wife, realizing he was using a phrase usually reserved for social media.

"Is that the proper word these days?" said Pegula, who up until recently was still using a flip-model cellphone. "Trending?"

This story has been corrected to delete a reference to Pegula being a Manitoba native. He is from Pennsylvania.