Sack-happy Ravens have the defense to back up Lamar Jackson 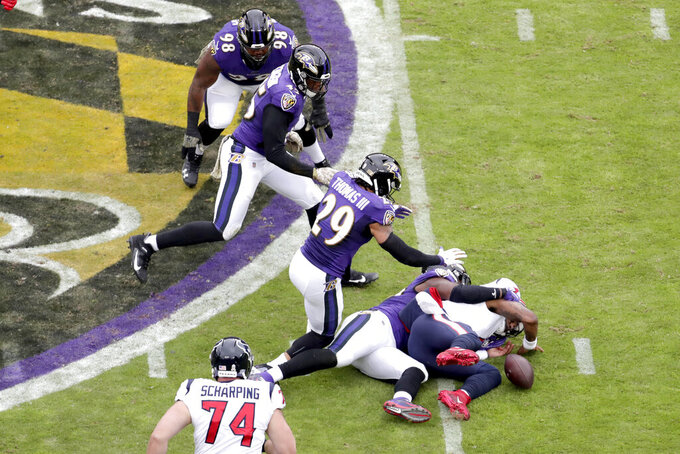 Houston Texans quarterback Deshaun Watson, right, fumbles the ball while being sacked by Baltimore Ravens outside linebacker Matt Judon during the first half of an NFL football game, Sunday, Nov. 17, 2019, in Baltimore. (AP Photo/Julio Cortez)

OWINGS MILLS, Md. (AP) — Through the first nine games of the season, the Baltimore Ravens’ relentless pursuit of opposing quarterbacks garnered just 16 sacks, a few hurried throws and a whole lot of frustration.

It was suggested that the loss of free agents Za’Darius Smith and Terrell Suggs — who ranked 1-2 on the team in sacks last season — was a big factor. Coach John Harbaugh shrugged off the assertion, insisting that the effort of the current unit ultimately would pay off.

That’s precisely what happened Sunday, when the Ravens made life miserable for Houston star Deshaun Watson in a 41-7 rout. Baltimore sacked Watson six times and had seven sacks in all, adding yet another component to an already effective defense.

“Nothing's different. We just got there,” Harbaugh said Monday. “I thought the coverage did a great job, of course, but we've been getting quarterback hits up until that point. I really think the pass rush has been good all year. The fact that we got the seven sacks and got the reward this game is awesome.”

Matthew Judon had two sacks to raise his team-leading total to six, and Tyus Bowser doubled his total to four.

“It feels like Raven football,” said tackle Brandon Williams, who registered his first sack of the year. “This is the way we’ve wanted to play since the beginning.”

Combining a defense that Watson surely never wants to see again, Lamar Jackson’s four touchdown passes and a running game that rambled for 263 yards, the Ravens (8-2) extended their winning streak to six — the team’s longest run since their first Super Bowl season in 2000.

“Anything is possible for this team at this point,” said running back Gus Edwards, who is averaging 5.5 yards a carry and has two touchdowns.

Edwards was a starter last season and led the Ravens with 718 yards rushing. Now he’s the backup to Mark Ingram but still runs hard and is a huge contributor.

“Gus is playing at a really high level,” Harbaugh said. “He’s got a very big role on our team and takes it seriously.”

The NFL’s top-ranked rushing game was in high gear against Houston, which came in ranked No. 3 against the run.

Edwards had 112 yards — including a 63-yard touchdown run — Ingram ran for 48 yards and Jackson tallied 86 yards on nine carries.

“Obviously, with Lamar, we create mismatches. It puts a lot of stress on their defense,” Ravens guard Marshal Yanda said. “I felt like as the game went on, we kind of wore them down a little bit.”

The Texans got 122 yards on the ground, so perhaps that’s a negative for Baltimore. Still, 41 of those yards came on a touchdown run by Carlos Hyde with the Ravens holding a 34-0 lead.

It’s also worth noting that Watson ran for a measly 12 yards, tied for his second-lowest total of the season.

Seth Roberts caught his first touchdown pass with Baltimore, a 15-yarder in the first quarter that put the Ravens ahead for good.

Roberts said he was “happy to contribute” and paid homage to Jackson, who found nine different receivers on Sunday.

“He can do anything on the field,” Roberts said. “He’s a freak.”

Willie Snead had two catches for 13 yards. Jackson would like to involve him more, but it just hasn’t worked out that way.

Snead has 21 receptions for 263 yards and two touchdowns. He led the Ravens last year with 62 catches.

The Ravens hope to have defensive tackle Michael Pierce (ankle) back for Monday night’s game against the Los Angeles Rams. Pierce was inactive Sunday, along with wide receiver Chris Moore, who missed a second straight game with a broken thumb.

“He’s just got to feel good running and doing the things he’s got to do with his hands,” Harbaugh said. “I think he’s got a real good shot, but it’ll be up to him and how it feels.”

ZERO — That’s how many times Sam Koch punted on Sunday. His most notable play was a flip-pass on a fake field goal that did not work.

Koch has punted only 21 times, an average of just over two kicks per game.

Baltimore goes on the road in search of its seventh consecutive victory. The Rams (6-4) are struggling after reaching the Super Bowl last season.

The Ravens beat the Rams 33-7 in the preseason last year. The last time the teams met in the regular season was 2015, when Baltimore won 16-13 on a field goal by Justin Tucker as time expired.