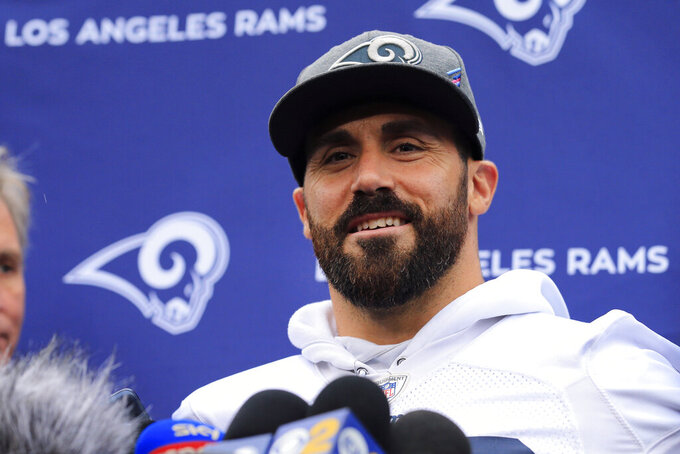 FILE - In this Oct. 25, 2019, file photo, Los Angeles Rams' Eric Weddle speaks with reporters at NFL football practice at the Grove Hotel in Chandler's Cross, Watford, England. The sx-time Pro Bowl safety says he is done with his 13-year NFL career. Weddle apparently made his long-expected retirement announcement on Twitter on Thursday, Feb. 6, 2020, although the hard-hitting safety with the famously big beard didn't use the specific word. (AP Photo/Leila Coker, File)

Weddle apparently made his long-expected retirement announcement on Twitter on Thursday, although the hard-hitting safety with the famously big beard didn't use the specific word.

“I love y'all. We had a great run!” Weddle tweeted at his three NFL teams, adding the hashtag #BEARDOUT.

Weddle played nine seasons for the San Diego Chargers and three more for the Baltimore Ravens before spending last season with the Los Angeles Rams. The native of the far-flung LA suburbs started all 16 games for the Rams, but said in December that he didn't expect to return for the second season of his contract with the club.

The 35-year-old Weddle became one of the NFL's toughest and most durable safeties after San Diego drafted him out of Utah in the second round in 2007. He became a starter for the Bolts in 2008, and he only missed six games over the next 12 seasons while making 29 interceptions in the regular season and one more in the playoffs.

Weddle performed well for the Rams, who missed the playoffs despite finishing 9-7.

After their season finale, Weddle said he didn't expect to return to the Rams because he didn't want to be a backup, and he believes Los Angeles is set on John Johnson and Taylor Rapp as their starting safeties for next season.

Johnson and Weddle were the Rams' starting safeties to begin the year, but Johnson was lost for the season with a shoulder injury just six games in, and Rapp performed well after stepping in as a rookie.

“This is the standard,” Johnson wrote on Twitter in response to Weddle's announcement. “Wish things went differently this season but I appreciate what you’ve done for me and (the Rams). Enjoy retirement, Turkey.”

Weddle's decision to retire will benefit the salary cap-strapped Rams. The safety would have cost $4.75 million against their cap this year.