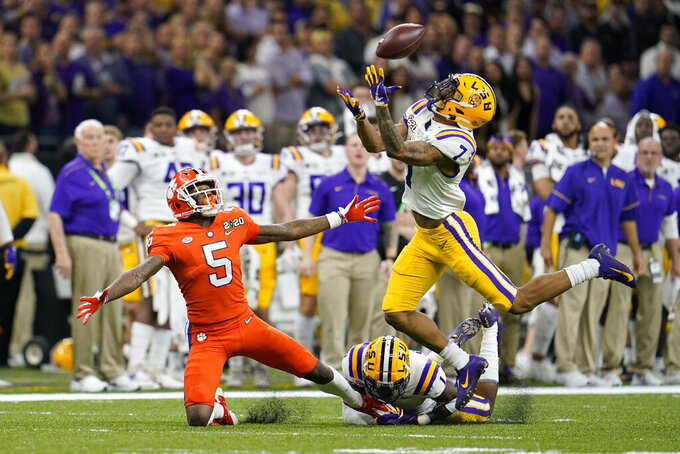 FILE - In this Jan. 13, 2020, file photo, LSU safety Grant Delpit, right, breaks up a pass intended for Clemson wide receiver Tee Higgins during the first half of a NCAA College Football Playoff national championship game in New Orleans. Delpit was selected by the Cleveland Browns in the second round of the NFL football draft Friday, April 24, 2020. (AP Photo/David J. Phillip, File)

CLEVELAND (AP) — The Browns added a national champion — and world-class trash talker — to their secondary.

Desperate for a safety, Cleveland made a trade in the second round before selecting LSU's Grant Delpit with the No. 44 overall pick in the NFL draft Friday night.

Delpit won the Jim Thorpe Award as college football's best defensive back last season, when he helped lead the Tigers to the NCAA title. He will be reunited in Cleveland with former LSU teammate Greedy Williams, a cornerback taken by the Browns in the second round last year.

Not lacking confidence, Delpit has already proclaimed that with him and Williams, cornerback Denzel Ward and safety Karl Joseph, the Browns will have the best secondary in the NFL. Asked to clarify if he meant one of the best, or the best, Delpit didn't back down.

Later, Delpit was asked about facing former LSU teammate Joe Burrow, the quarterback taken with the No. 1 pick by Cincinnati, twice a year.

“I’m very excited to pick Joe off twice a year, three times a year, however many times we meet,” he joked.

“Certainly you want some bravado, especially in that back end when you’re the last line of defense,” Stefanski said. “But I can promise you our team won’t be about talking."

Cleveland traded the first of its two picks (No. 74) in the third round and a seventh-rounder (No. 244) to New Orleans, dropping down 14 spots and adding a third-round pick in 2021.

The Browns then used the No. 88 pick to select Missouri defensive tackle Jordan Elliott, who began his college career at Texas. The 6-foot-4, 315-pound Elliott will give the Browns some depth — and size — and can be a disrupting force on a line that underachieved in 2019.

Elliott said his mother's boyfriend had a dream he was going to the Browns.

“I feel like it was something that was meant to happen,” he said.

At No. 97, the Browns took LSU linebacker Jacob Phillips, who led the national champs in tackles last season. Cleveland was in need of depth at linebacker after not re-signing veterans Joe Schobert and Christian Kirksey.

To this point, Browns general manager Andrew Berry has taken only SEC players, two from LSU, one from Alabama and one from Missouri.

“We did not plan that,” Berry said with a laugh. “They're just really good football players.”

Berry made his first trade of his first draft in charge before selecting the 6-2, 213-pound Delpit. Berry exchanged second-round picks with Indianapolis for a fifth-round pick (No. 160) and the Colts' choice at 44, which he used on Delpit.

“We really viewed him as a big, versatile playmaker,” Berry said. “He's a guy who can play the post. He can play near the line of scrimmage. He can cover tight ends, walk over a slot and hold his own against receivers and he's been a consistent producer throughout his career.”

Berry said Delpit, who grew up in New Orleans as a Saints fan, played most of last season with a “high ankle sprain that would have put a lot of players out of commission for a longer period of time."

Delpit said his injury made it difficult for him to even walk on the day after games. It also led to questions from NFL personnel about whether or not he's a good tackler, a knock Delpit finds offensive.

“I’m so tired of hearing that I can’t tackle, I might tackle you for asking that question,” Delpit said with a laugh. “I got something to prove."

Along with reuniting in Cleveland with Williams, Delpit will also join fellow LSU alums Odell Beckham Jr. and Jarvis Landry.

“They call it the LSU of the north,” Delpit said. "We are so close to winning. We just need a championship mentality. I am going to bring that to the defense, for sure.”

Berry added that everyone the Browns spoke to at LSU raved about Delpit's football intellect and that the 21-year-old was one of the most impressive players they interviewed at the combine.

Delpit said the time he spent with the Browns felt different.

“We had a special connection," he said. "I try to be myself in all the interviews. I do not try to fake anything. I think they really just liked that, and I can tell we were on a good page when the meeting was over.”

Friday's solid picks continued a nice first draft for Berry, who stuck to his plan Thursday and addressed the Browns' biggest need by selecting Alabama tackle Jedrick Wills with the 10th overall pick.