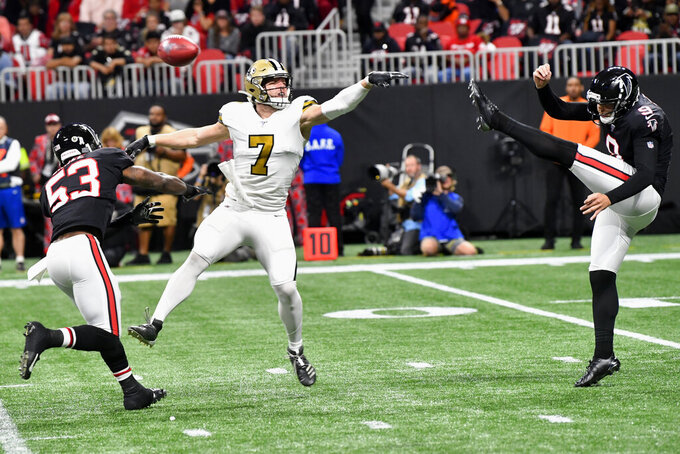 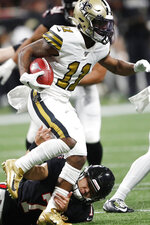 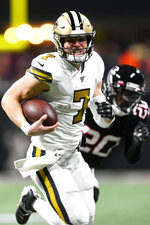 ATLANTA (AP) — Taysom Hill’s rare moment in the spotlight came in an important game for the New Orleans Saints.

Hill blocked a punt to set up his 3-yard touchdown catch before scoring again on a 30-yard run, and the New Orleans Saints clinched their third straight NFC South title by beating the Atlanta Falcons 26-18 on Thursday night.

Hill stole the show on a roster filled with more established stars.

“When you have guys like Mike Thomas, Alvin Kamara, Jared Cook, the list goes on, it kind of creates opportunities for little old me because it creates so much attention that's put on those guys,” Hill said.

“Coach (Sean Payton) is one of the best at being creative and putting guys in positions to be successful. I got lucky because I was that guy tonight.”

With Julio Jones inactive due to a shoulder injury, the Falcons had too little offense to keep pace with Drew Brees and the Saints. Atlanta recovered two onside kicks in the closing minutes, including one with 1:54 remaining, to make things interesting.

“We had to drop back and pass at the end of the game,” Ryan said. “When you do that and there’s really no threat of run, it’s tough sledding, particularly when you’re going against a good defense, a very good defensive line and one of the better pass rushers in the game in Cam Jordan.”

The versatile Hill blocked Ryan Allen’s punt to end Atlanta’s first possession. The Saints took over at the Falcons 30, and four plays later Hill scored his first touchdown on a short pass from Brees.

Hill took a direct snap and ran 30 yards for his first rushing touchdown of the season to give New Orleans a 17-6 lead late in the first half.

“If I can step on the field eight to 10 to 15 times, whatever that number is, my goal is to add a spark whenever I can,” Hill said. “I love to be able to go in and add some energy.”

The disappointing Falcons (3-9) solidified their hold on last place in the division with their second straight home loss.

Atlanta running back Devonta Freeman returned after missing two games with a foot sprain. Freeman ran for 51 yards on 17 carries.

Ryan fumbled in the fourth quarter when hit by Marcus Davenport. Vonn Bell’s recovery set up Will Lutz’s fourth field goal, from 45 yards.

Eli Apple’s 22-yard pass-interference penalty helped extend an Atlanta drive that ended with a fourth-down incompletion from the Saints 2.

Apple drew another pass interference call, this one a 35-yarder, and on the next play Ryan found tight end Jaeden Graham for an 18-yard touchdown pass that cut the Saints’ lead to 7-6, following Younghoe Koo’s missed extra point.

Koo also missed a 42-yard field goal before making a 45-yarder with 3 seconds remaining in the first half. Koo was good from 43 yards late in the game.

Saints: Kiko Alonso left the game with a thigh injury. ... The offensive line remained short-handed as left tackle Terron Armstead was inactive after leaving last week’s win over Carolina with an ankle injury. Left guard Andrus Peat missed his third straight game since breaking his arm against Atlanta on Nov. 10.

Falcons: Left guard James Carpenter left the game with a concussion in the first half. Jamon Brown, who lost his starting job at right guard to Wes Schweitzer, returned to the game following Carpenter’s injury. ... Backup offensive tackle Ty Sambrailo injured his hamstring.

Hill and many teammates wore T-shirts after the game that read “The South Is Not Enough.” Clearly, the Saints’ goals extend beyond the division crown. “We've got bigger fish to fry, so to speak,” Brees said. “We've got a list of goals and objectives and want to knock them down, one by one.”

With Jones missing a game for the first time since 2016, and Atlanta tight ends Austin Hooper and Luke Stocker held out with injuries, Ryan had to look for new targets. He threw a 13-yard touchdown pass to Russell Gage with less than four minutes remaining. Christian Blake had six catches for 57 yards.

The Saints return home to play San Francisco on Dec. 8.

The Falcons play their fifth straight game against an NFC South rival when they face Carolina on Dec. 8. The Falcons beat the Panthers 29-3 on Nov. 17.

By Teresa M. Walker just now
4 hrs ago
By Greg Beacham 5 hrs ago
5 hrs ago
By Brett Martel 6 hrs ago