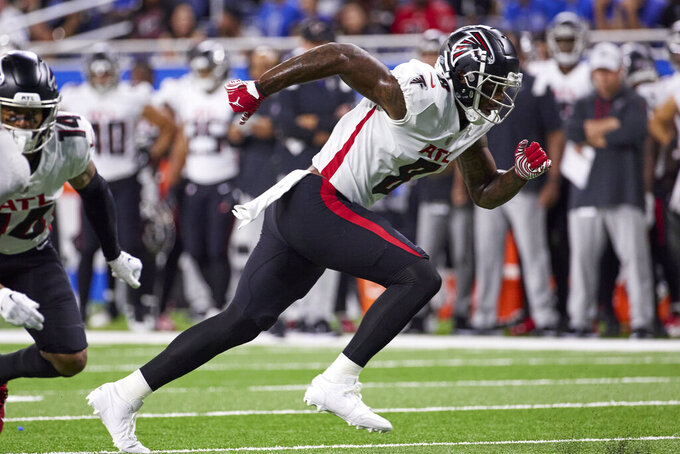 OPENING LINE: Saints by 5 1/2, according to FanDuel SportsBook.

TURNOVER DIFFERENTIAL: Saints plus-7; Falcons minus-6

SAINTS PLAYER TO WATCH: WR Michael Thomas has not played in more than a year, but was on track to go in the opener. In 2019, Thomas set an NFL record for catches in a season with 149. That’s when Drew Brees was New Orleans’ QB and offensive guru Sean Payton was the head coach. Thomas has said he’s eager to prove his best seasons remain ahead, regardless of changes in personnel around him.

FALCONS PLAYER TO WATCH: QB Marcus Mariota has some big shoes to fill as he takes over for longtime starter Matt Ryan. Mariota was the No. 2 overall pick by the Titans in 2015, but he's failed to live up to those lofty expectations. In fact, Mariota hasn't started a game since 2019, spending the two years as a Raiders backup. Mariota said he grew a lot during his time in Las Vegas, and he's eager to put those lessons to use in Atlanta. Mariota is solidly locked in as the starter for now, but rookie Desmond Ridder could get a look down the road if the Falcons are struggling.

KEY MATCHUP: The Saints offensive line vs. the Falcons pass rush. Three-time Pro Bowl left tackle Terron Armstead left New Orleans in free agency. James Hurst will take over that key spot after spending last season as a reserve who filled in at both guard and tackle because of injuries. Now it's Hurst who's coming back from a broken left foot. He'll have the job of protecting the blindside of QB Jameis Winston, who's returning from season-ending knee surgery. Fortunately for the Saints, they'll be facing a Falcons pass rush that ranked last in the league with just 18 sacks. It's not clear how the Falcons will be able to improve on those paltry numbers given their bargain-basement spending in free agency. The 2021 sacks leader, Dante Fowler with 4 1/2, was let go after the season.

KEY INJURIES: The Saints’ projected starting lineup is largely healthy, although CB Paulson Adebo (ankle) missed practice during the week. ... Thomas (hamstring) and LB Pete Werner (groin) were limited in practice as they come back from injuries. ... Tre’Quan Smith, a deep threat and one of the Saints’ top reserve receivers, missed practice time with groin soreness. ... The big question for the Falcons is WR Drake London, their first-round draft pick. He played just one possession in the preseason because of a knee injury. The Falcons planned to wait until the end of the week before determining his playing status. ... CB Darren Hall (quad) was the only other concern.

SERIES NOTES: The Saints have a four-game winning streak in Atlanta. ... Overall, New Orleans has taken seven of the past nine meetings between the NFC South rivals. ... The teams split their season series a year ago, each winning on the other's home field.

STATS AND STUFF: Dennis Allen makes his debut as Saints coach following the departure of Payton, who had led New Orleans since 2006. Allen was the Saints’ defensive coordinator from the latter part of the 2015 season through last season. This is his second NFL heading coaching job. He went 8-28 with the Oakland Raiders from 2012-2014. ... Chris Olave, selected 11th overall out of Ohio State, is expected to be among the Saints’ starting receivers after a strong training camp and preseason. ... Olave joins a revamped receiver group that includes free-agent acquisition Jarvis Landry making his Saints debut and the return of Thomas. ... Winston passed for 1,170 yards and had 15 TDs (14 passing, one rushing) with three INTs in seven starts last season, during which New Orleans went 5-2. ... DE Cameron Jordan led New Orleans with 12 1/2 sacks and is among 10 players since 1982 with at least seven sacks in 10 straight seasons. Jordan ranks third among active players with 107 sacks. ... S Tyrann Mathieu, a New Orleans native and former LSU star, makes his Saints debut. He has 76 passes defensed and 26 INTs in his nine NFL seasons. ... Falcons QB Marcus Mariota is set to start his first game since 2019. ... This will be only the fourth game since the start of the 2008 season that Matt Ryan has not been Atlanta's starting QB. He was traded to Indianapolis in the offseason. ... The Falcons are looking to improve at home after going 1-6 at Mercedes-Benz Stadium last season. They are just 15-24 at their retractable-roof facility since it opened in 2017. ... Atlanta is counting heavily on London to lead their no-name receiving group. The Falcons don't have any wideouts who produced more than 34 catches or three touchdowns in 2021. ... Only two teams allowed more points than the Falcons last season. ... WR-RB Cordarrelle Patterson led Atlanta in rushing (618 yards, six TDs), ranked third in receptions (52 for 548 yards and five TDs) and returned kickoffs.

FANTASY TIP: Alvin Kamara remains among the Saints’ top threats as both a runner and receiver. He's looked healthy and effective throughout training camp after struggling with knee injuries for part of last season. Kamara is the only player in the NFL with 1,300-plus scrimmage yards in each of the past five seasons.