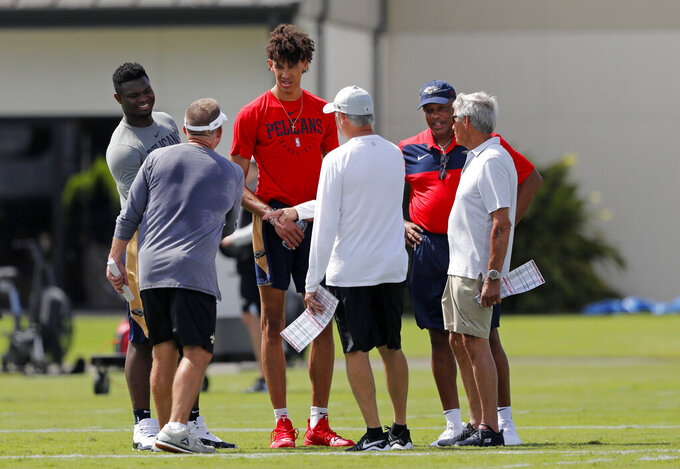 Brees sees key parallels in the timing of each of their arrivals on New Orleans' pro sports scene, and is eager to share what he's learned if it can help Williamson understand the task — and opportunity — at hand.

"Certainly, I am always going to be there for Zion," Brees said after practice Thursday at Saints training camp. "Whatever I can do to help guide, to help advise, to help mentor, I'm there.

"If he wants to go one-on-one, I'll do that, too," Brees added smiling, but perhaps only half-joking, given his strong reputation in the Saints' locker room as a pick-up basketball player. "There's a kinship regardless of a generational gap, right? There's a kinship because I'm in a different sport and yet I understand the pressures."

The Saints and Pelicans have been under the same ownership since 2012, when Tom Benson and his wife, Gayle, bought the NBA franchise. Gayle Benson, a widow since 2018, continues to own both teams, whose practice headquarters are on the same campus in suburban New Orleans.

"That was just my personal statement to him, welcoming him to the city, letting him know that I want to be there for him as a resource — whatever I can do," Brees said.

"For me, being a guy who knows what it's like to come to a city feeling like it's just kind of starting from scratch, building something from the ground up — that's the way we felt when came here in '06 with Sean Payton and all the guys that came in that year," said Brees, who led the Saints to the NFC title game in his first season in New Orleans and a Super Bowl title in his fourth season.

"Here we are 14 years later; we're able to look at all that we've accomplished and how we're still trying to climb and get better," Brees said. "I think we're at that point with the Pelicans in a lot of ways. There's a lot of turnover."

Williamson was drafted less than a week after the Pelicans accommodated six-time All-Star Anthony Davis' trade request by dealing him to the Los Angeles Lakers. The Pelicans also let several other starters or regulars leave in free agency.

Earlier this week, Brees invited Williamson to take part in a skills contest that the Brees routinely organizes with all of New Orleans' reserve QBs. The challenge, in this case, entailed three jump shots with a basketball, followed by a couple of attempts to throw a football through a basketball hoop from distances of 30 and 50 yards (with points available for hitting the backboard and rim). Brees won; Williamson narrowly missed the basket on his 50 yard heave.

"For me, it's allowing these young guys to see the opportunity they have here in New Orleans," Brees continued. "This is an incredible fan base. It's an incredible city that's ready to embrace them, but there's a right way to do it. It's not like you just snap your fingers and it happens. It takes work. It takes hard work. It takes dedication and there's going to be some bumps in the road."