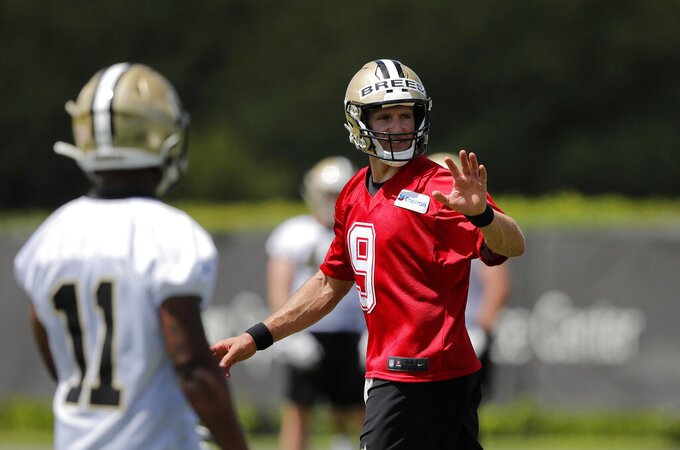 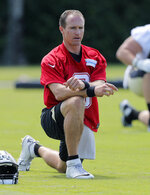 METAIRIE, La. (AP) — A playful grin widened across Drew Brees' face while he discussed lining up as a receiver for the read-option plays the Saints installed last season for third-string quarterback Taysom Hill.

"If they're going to split me out as much, I'm going to need to have some routes that at least I can start working on," Brees said Thursday after a voluntary offseason practice.

It sounded like he was joking, but anything's possible.

The 40-year-old quarterback said learning and trying new things is as important to him now as at any point in his 19-year career.

In fact, he sees it as a recipe for sustained success.

"At the end of the year, all the coaches pull out all the film from every opponent and they're sitting there analyzing and watching it, right?" Brees said. "So, everybody's studying your stuff. So, you can't just come back and keep doing the same stuff over and over."

Last season, Brees attempted the fewest passes and amassed the fewest yards passing of any of his 13 seasons with the Saints. Yet Brees broke his own NFL record for completion rate, connecting on 74.4 percent of his passes. He also passed for 32 TDs while throwing just five interceptions.

Perhaps most importantly, Brees led the Saints to the NFC championship game, which they likely would have won if not for what the NFL determined were mistakes by officials not to call late-game pass interference and helmet-to-helmet contact penalties against the Los Angeles Rams.

This season, Brees is looking forward to seeing what other new wrinkles coach Sean Payton might introduce, particularly in light of the acquisition of veteran tight end Jared Cook during free agency.

"I like looking at new concepts and beginning to see, 'OK, I think this is something we can be really good at based upon our personnel," Brees said. "That's fun, too, because you begin to pull all these concepts out that maybe you haven't done before, so it's a new challenge to try to incorporate that or develop a comfort level enough that that becomes a part of what you do."

Brees said Cook brings the speed, size and catching radius that should help the tight end "fit very well into our offense."

Cook, meanwhile, said he saw nothing in his first three practices with Brees this week that made him doubt whether the Saints' record-setting QB is still elite.

"Nothing's changed," Cook said. "He's advanced in what he does. ... He's very detail oriented and he takes the little things and strives to be great at them."

Brees is under contract for only one more season, and it's unclear how much longer the father of four might play. He has said he treats every season as if it might be his last now, tries to "stay in the moment," and takes nothing for granted.

"It's a different approach because I'm so much wiser than I was" as a younger pro, Brees said. "When you're that age you just think just work in general is good. It's not necessarily efficient work or that you're working smart. In other words, I don't remember having that much of a plan back then. It was just, 'Hey, I'm a good athlete. I like football. I like to work out. I'll just go out there and run around and sling it.'

"Now the approach is so regimented with everything I do on a daily basis in regards to my sleep habits and my diet and the way that I train and the way I recover and how I'm caring for my shoulder and different parts of my body that require me to play the quarterback position," Brees said. "It's just very different now."