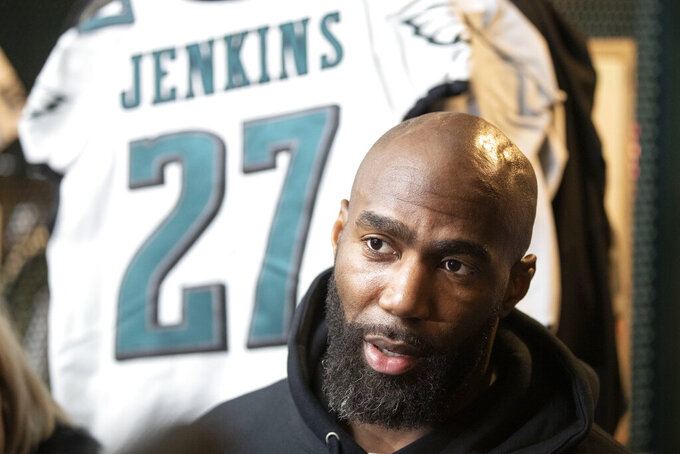 Philadelphia Eagles strong safety Malcolm Jenkins speaks with members of the media at the NFL football team's practice facility in Philadelphia, Monday, Jan. 6, 2020. The Eagles ended their season with a 17-9 loss to the Seattle Seahawks on Sunday. (AP Photo/Matt Rourke)

Veteran free agent safety Malcolm Jenkins agreed to a four-year, $32 million contract with the Saints, a person familiar with the situation said Wednesday. The person spoke to The Associated Press on condition of anonymity because the agreement has not been announced.

Jenkins, 32, returns to the team that made him a first-round draft choice out of Ohio State in 2009. He has played 11 NFL seasons — his first five with the Saints and past six with the Philadelphia Eagles, who declined to pick up his $7.6 million option for the 2020 season. He was a member of each franchise's lone Super Bowl winner, the 2009 Saints and 2017 Eagles.

“I hate that he got out of here,” Saints coach Sean Payton said the week that New Orleans defeated the Eagles in November 2018. “That was probably as big a mistake as we've made here in 13 years. He's made up of all the right things and he's a tremendous competitor.”

Last season, Jenkins started all 16 games for Philadelphia and made or assisted on 81 tackles, including six tackles for losses and 2 1/2 sacks. He also forced four fumbles and recovered one. He has 17 interceptions but had none last season.

The move also provides veteran leadership in a secondary that is relatively young and has other holes to fill after starting cornerback Eli Apple chose to sign with the Las Vegas Raiders.

The Saints agreed to a two-year, $50 million contract with record-setting quarterback Drew Brees the day before free agency began, setting the stage for the departure of popular backup Teddy Bridgewater to leave in free agency. Bridgewater wound up with NFC South foe Carolina.

But the Saints have moved to retain fellow reserve QB and utility player Taysom Hill, who is a restricted free agent. New Orleans has placed a first-round tender offer on Hill, meaning any team that offers Hill more than the Saints are willing to match also will have to give New Orleans a first-round draft choice.

But if the Saints are to continue to use Hill on special teams and as a tight end, read-option QB and runner, as they have the past two seasons, New Orleans might also need to pursue another veteran QB.

It remained to be seen whether New Orleans would bring back two free agent starters on offense, left guard Andrus Peat and receiver Ted Ginn.

Peat, who played tackle at Stanford and also has filled in at tackle with the Saints, was drafted 13th overall by New Orleans in 2015 and has been selected to the Pro Bowl the past two seasons.

Ginn's production dipped considerably last year and he will be 35 next season.

The Saints also have to spend carefully because three prominent starters — running back Alvin Kamara, cornerback Marshon Lattimore and right tackle Ryan Ramczyk — are all entering the final season of their rookie contracts, a time when some players choose to hold out for extensions, as record-setting receiver Michael Thomas did in 2019.