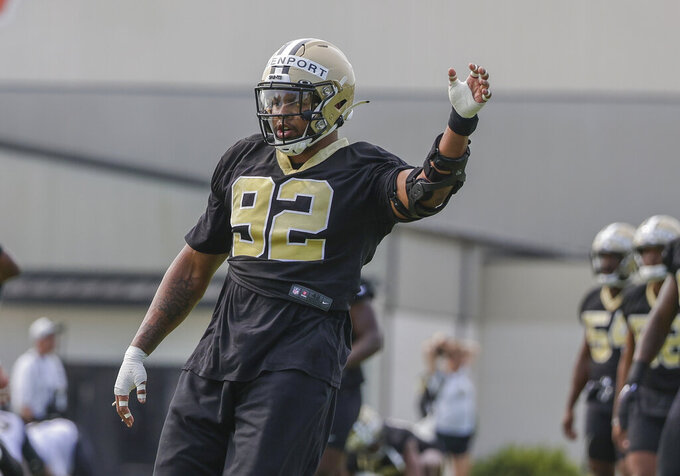 METAIRIE, La. (AP) — Marcus Davenport adopted a new diet and dove into an introspective summer reading list as he prepared for a potentially pivotal season in his career.

The New Orleans defensive end and 2018 first-round draft choice is cognizant of how a breakout year could help him achieve “generational wealth” as he enters the final two years of his first NFL contract. He's also well aware the Saints need their pass rushers to make up for the free-agency departure of 2020 sack leader Trey Hendrickson. But Davenport sounds decidedly unburdened by such factors.

Football “becomes your identity and then you start taking offense to everything people say," Davenport said, describing his former outlook. “I used to put a lot of pressure on myself and I used to think that I had to live up to certain things, (but) I started realizing that when you relax, you can just be. And I think that’s helped me."

The 6-foot-6, 265-pound Davenport, who describes himself as an avid reader, mentioned three books he's paged through recently — one that relates specifically to performance ("The Mindful Athlete," by George Mumford), one about Zen Buddhism ("The Way of Zen," by Alan Watts) and one that delves into personal identity ("The Book," also by Watts).

“I feel like it’s helped me a lot," said Davenport, who began last season injured and finished the regular season with a career-low 1 1/2 sacks in 11 games.

“That’s what I needed. I was looking for something and realized after reading a lot that you shouldn’t really try to grasp onto things. You either got to go with the flow or you mess up the whole stream,” he said. "So, at this point, I’m kind of just trying to enjoy life.”

Davenport hopes that bringing resurgent joy into his approach to his profession will help him maximize his potential. The Saints could certainly use that after letting Hendrickson, who had a career-best 13 1/2 sacks last season, go to Cincinnati in free agency.

Saints coach Sean Payton described Davenport's first three seasons as “up and down based on his health a little bit.”

“He’s had really good moments and times where we’ve been really encouraged,” Payton said. "The key is staying healthy and being available. I think he’s had a good offseason. He’s healthy. ... I'm anxious to see how he does this year, though. It’ll be an important year for him.”

Davenport describes Hendrickson as a friend and bowling buddy, saying he was happy from him when he signed a four-year contract worth up to $60 million with the Bengals.

A big contract “opens up the possibility to change lives and I know that’s important,” Davenport said. “Football’s only so long.”

Davenport’s rookie contract initially paid $13.7 million during four years, but also included a $9.5 million fifth-year option in 2022, which the Saints have picked up. Still, a productive 2021 could help him bargain for a lucrative, long-term extension heading into his fifth pro season.

The Saints traded three draft picks — including two first-rounders —- to move up 13 spots in the 2018 draft and select Davenport 14th overall out of Texas-San Antonio. Playing on the opposite edge from perennial Pro Bowl defensive end Cameron Jordan, Davenport has 12 career sacks in three seasons with a career-best six in 2019.

Davenport's recent self-improvement efforts have included hiring a personal chef and then learning how to cook for himself. He said his diet features more fish and vegetables. He hasn't lost his taste for Whataburger, a favorite from his Texas youth, but such indulgences are rarer now.

Davenport isn't ready to boast about his cooking, noting that some of his experimentation in the kitchen resulted in burnt fish or “great dog food.”

But he's confident in his health, asserting, "This is the best I’ve ever felt.”

Now the Saints are hoping Davenport will make opposing blockers and quarterbacks feel considerably less than their best.

“It takes a tandem," Jordan added. “It takes defensive ends — left and right — to complete this thing.”