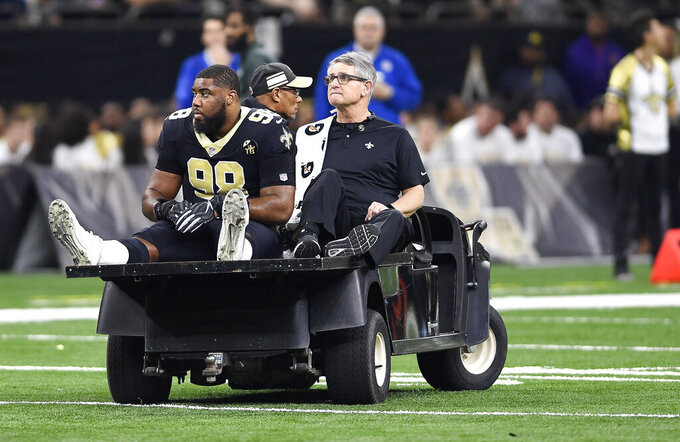 FILE - In this Jan. 13, 2019, file photo, New Orleans Saints defensive tackle Sheldon Rankins (98) leaves the field after an injury in the first half of an NFL divisional playoff football game against the Philadelphia Eagles in New Orleans. Rankins has returned to practice for the first time since tearing his Achilles tendon in New Orleans’ divisional round playoff victory over Philadelphia last January. Saints coach Sean Payton says he does not think it is realistic that Rankins would play in the regular season opener. (AP Photo/Bill Feig, File)

METAIRIE, La. (AP) — The "Sheldon Shimmy" was the dance of choice at Saints practice on Monday evening.

Defensive tackle Sheldon Rankins, known for his shoulder-shaking sack dance, returned to practice for the first time since tearing his Achilles tendon in New Orleans' divisional round playoff victory over Philadelphia last January.

Coach Sean Payton said he does not think it is realistic that Rankins would play in the regular-season opener against Houston on Sept. 9, but that the decision to bring Rankins back to practice indicates a realistic possibility he will be ready to return to the lineup before Week 6.

Rankins, whose eight sacks ranked second on the club last season, had been on the Saints' physically unable to perform list, meaning he hadn't been taking up an active roster spot.

But if he'd remained on the PUP list beyond the preseason, he would not have been eligible to return to the active roster until after the sixth week of the regular season.

"The feeling was he'll be ready earlier than six weeks," Payton said. "I think it's worth doing what we're doing now."

Rankins said he arrived at Saints headquarters Monday expecting to spend his day in the treatment room on his own as usual, only to be notified by trainers that he'd been cleared to suit up for practice.

"It's very surreal putting on cleats again, to come out here, go through warmup lines, walk-throughs, everything like that, seeing your teammates embrace you," Rankins said.

Payton said he would not have predicted when training camp began that Rankins would be back on the active roster soon, having seen how long other players have needed to recover from such an injury.

Rankins, a Saints first-round draft choice in 2016, also missed nearly the first half of his rookie season with a fractured fibula.

He said he could not be certain he'd be playing by Week 6, but added, "It's something I would obviously like. I'll leave it at that.

"Right now it's about being able to come out here every day and take steps now as a football player — not as a guy who's trying to rehab and get back out here," Rankins continued. "It's about being able to improve on my football abilities, to be able to kind of hit my stride again, do things I was kind of able to do last year."

The Saints have recent experience shepherding a defensive lineman back from a similar injury. Former Saints defensive end Alex Okafor tore his Achilles tendon in Week 11 of the 2017 season and was active by Week 1 of last season. He wound up with four sacks and also blocked a punt.

Rankins showered credit on the Saints' training staff and said he also has consulted with Okafor, now a former teammate who left in free agency for Kansas City.

"The best advice I got was from Alex, honestly, he said 'When you're ready, cut it loose. Don't think. Don't hesitate. Don't baby it. When you get that thought in your head. 'Yeah, I can go do this,' just cut it loose and go play, and the rest will take care of itself.'"

Notes: The Saints activated Rankins after placing tight end Garrett Griffin on injured reserve. Griffin limped off the field with an apparent lower body injury during Saturday night's preseason game against the New York Jets. ... Veteran punt return specialist Marcus Sherels returned to practice for the first time since before New Orleans' preseason opener, raising prospects the Saints will be able to provide him some return opportunities in Thursday night's preseason finale against Miami.