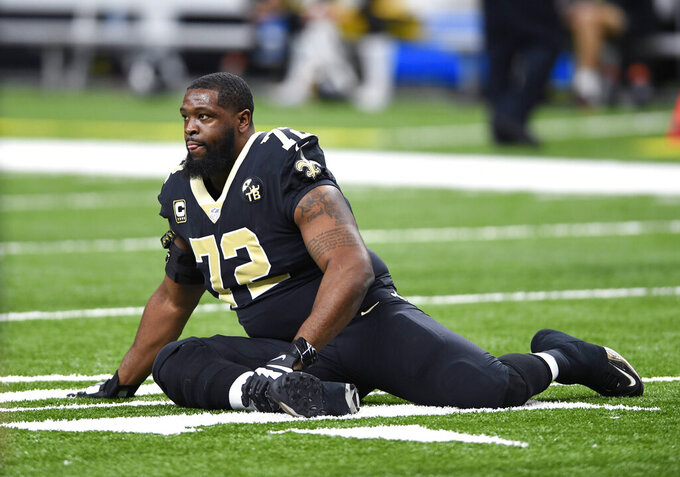 FILE - In this Dec. 23, 2018, file photo, New Orleans Saints offensive tackle Terron Armstead warms up for the team's NFL football game against the Pittsburgh Steelers in New Orleans. Armstead has been dealing with an ailing pectoral muscle that has sidelined him for six of the past seven games. He tried to come back in Week 16 against Pittsburgh, but didn’t make it through that game. (AP Photo/Bill Feig, File)

The fact that all three have played virtually the entire 2018 season only begins to tell the story of how relatively healthy the Saints are as they return to the postseason as their conference's No. 1 seed.

And the bye week they earned will only help.

"Health in general is an important aspect of this game and the best attribute is availability," said Okafor, who tore his Achilles in the 10th game of the 2017 season and managed to come back strong enough to play in all 16 games this year.

"In the last playoff game I played in, for Arizona against Carolina, we were down to our third-string quarterback. So to be able to have the opportunity to go into the playoffs where most of this team is healthy is huge for us — and I think it'll show."

None of the nine New Orleans players on injured reserve were major contributors this season. Two of the biggest names on the list are 2018 free-agent acquisitions who played less than half the season — defensive back Patrick Robinson, who played in three games, and receiver Cameron Meredith, who played in six.

If there is one area of concern, it is the offensive line.

Left tackle Terron Armstead, the club's second-highest-paid offensive player, was not present during the portion of Wednesday's practice open to reporters. Same for starting guards Larry Warford and Andrus Peat.

Armstead has been dealing with an ailing pectoral muscle that has sidelined him for six of the past seven games. He tried to come back in Week 16 against Pittsburgh, but didn't make it through that game.

Warford was listed with a knee injury when he was scratched from the regular-season finale. Peat, who is one of New Orleans' most versatile linemen, played in Week 17 but left with a hand injury.

The good news for New Orleans is its banged-up linemen can get extra rest this week, and that the main contributors at all other position groups appear fit.

The health of 39-year-old quarterback Drew Brees hasn't been an issue. He even got Week 17 off after leading the Saints to a 13-2 record in the first 15 games. Also getting last weekend off was running back Alvin Kamara, one of the Saints' most productive players in both the running and passing game, with 1,592 yards and 18 touchdowns from scrimmage. Michael Thomas finished the season healthy after setting a franchise record for yards receiving in a season with 1,405. Running back Mark Ingram has said he feels relatively fresh after playing in 12 games since returning from a four-game suspension to start the season.

There were times when the Saints' passing game looked as if it could use the deep threat Tedd Ginn Jr. provided before his knee injury, which led him to undergo arthroscopic surgery and spend more than half the season on injured reserve. But Ginn came back in Week 16, played well, and said he feels good after getting additional rest last week.

All the more reason for Brees to like the Saints' prospects.

"Obviously staying healthy is very important for any team that's making a run," Brees said. "You want to have the right guys in key places."

On defense, all of New Orleans' top producers appear ready to go, from leading sack men Cameron Jordan and Sheldon Rankins up front to linebackers Anzalone and Demario Davis, who were two of the team's top three tacklers. On the back end, second-year pro Marshon Lattimore, New Orleans' best player in pass coverage, played in every regular-season game, as did safety Vonn Bell, the club's second-leading tackler.

Defensive end Marcus Davenport and fourth-year interior lineman Tyeler Davison both missed time with foot injuries earlier this season, but returned to solidify a defense that racked up 49 sacks this season.

"We've been fortunate that injuries have not been a big factor in our season," Davison said. "And most of the ones we have had, the people that had them were able to fight through it.

"We do have a deep team, so when somebody has gotten hurt, somebody else was able to step up," Davison continued. "But you don't want your best players getting hurt. That obviously plays a huge role."