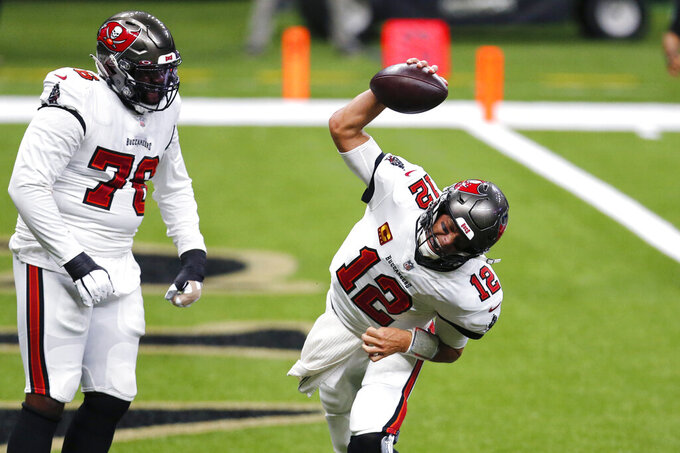 The first of Brady's interceptions led to Kamara's 6-yard touchdown run. The second pick thrown by the new, 43-year-old Bucs QB — who left the New England Patriots in free agency after 20 years and six Super Bowl triumphs — was returned 36 yards for a touchdown by Janoris Jenkins.

Neither quarterback was statistically exceptional in this first-ever NFL game featuring two quarterbacks in their 40s.

The 41-year-old Drew Brees passed for 160 yards and two TDs, but he also avoided critical mistakes. He did not turn the ball over and took only one sack. His first TD pass was a dump-off to Kamara from 12 yards out. In the fourth quarter he hit free-agent signing Emmanuel Sanders for a 5-yard score.

Few witnessed this historically significant quarterback matchup in person, with government leaders and the Saints having agreed that no fans should attend the opener amid the coronavirus pandemic.

That turned the normally deafening 73,000-seat Superdome into more of an echo chamber. When Wil Lutz’s field goal put New Orleans up 17-7, the squeaking of pulleys could be heard across the stadium as the net behind the goal post was lowered.

Tight end Jared Cook caught five passes for 80 yards for New Orleans, highlighted by a 46-yard reception down the left side that set up Sanders' TD.

Brady was 15 of 28 passing for 157 yards and one TD through the first 54 minutes of the game. He padded his numbers in garbage time, finishing with 239 yards and two TDs, the second scoring strike going to Mike Evans with 2:41 left.

Tampa Bay's opening drive was promising for Brady, who the Bucs hope can lead them to their first playoff appearance since the 2007 season.

He lofted a 26-yard completion to Chris Godwin along the right sideline, drew a pass interference penalty with a 22-yard attempt to Mike Evans and capped the drive with a 2-yard keeper, after which he emphatically spiked the ball off the turf.

After that, however, his turnovers helped stake the Saints to a lead they would not relinquish.

Both teams largely stood along the sidelines during the national anthem.

One exception was Saints safety and Players Coalition co-founder Malcolm Jenkins, who trotted to the Saints bench area after the anthem had finished.

The Saints saw two players activated from the practice squad on Friday come up with big special teams plays. Defensive end Margus Hunt blocked a 54-yard field goal attempt in the first half and had a sack in the fourth quarter. Receiver Bennie Fowler recovered a muffed kickoff at the Tampa Bay 18 in the fourth quarter. That set up a 21-yard field goal that made it a three-score game with 8:01 left.

Buccaneers: Evans played after missing practice the past week with a hamstring injury. His only catch was his late, 2-yard TD. DL Rakeem Nunez-Roches was down and briefly attended to by team staff late in the first quarter before walking off on his own.

Saints: Two-time All-Pro WR Michael Thomas appeared to be limping in the fourth quarter of a game in which he had just three catches for 17 yards. New RB Ty Montgomery appeared shaken up after special teams play in the third quarter but was able to walk to the sideline. Hunt also required attention on the field in the third quarter and walked off.