Saints' Jenkins primed for campaigns on and off the field 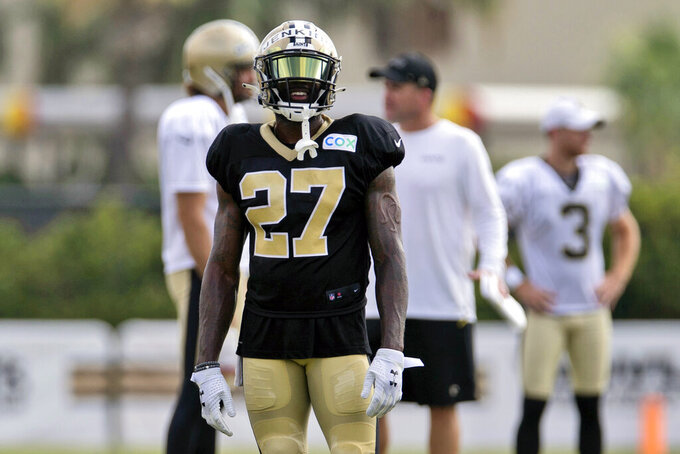 New Orleans Saints safety Malcolm Jenkins (27) waits for a play during NFL football training camp at the Ochsner Sports Performance Center in Metairie, La., Thursday, Aug. 20, 2020. Jenkins sees historically significant opportunities before him with both the contending New Orleans Saints and with a racial justice movement that has gained precipitous momentum in recent months. (David Grunfeld/The Advocate via AP, Pool)

METAIRIE, La. (AP) — Malcolm Jenkins sees historically significant opportunities before him with both the contending New Orleans Saints and with a racial justice movement that has gathered burgeoning momentum in recent months.

He also sees no reason why his focus on one should necessarily come at the expense of the other, dismissing the notion that he lacks the capacity to succeed simultaneously on both fronts.

That’s why the 11-year NFL veteran agreed to join a cable news network as a social and racial justice correspondent in the same year that he’s taking on a leadership role with a club that has its sights set firmly on the Super Bowl.

Serving as one of his sport's leading social activists is “something I’ve been doing now going on four years, so I think I’ve gotten it down pat,” said Jenkins, alluding to his role as co-founder of the Players Coalition in 2017 — the same season he helped lead the Philadelphia Eagles to their only Super Bowl title.

“Being a correspondent and contributor for CNN, and just all that’s happening right now in our country with the pandemic and social unrest and this (presidential) election coming up, obviously there are a lot more demands," Jenkins added. "But I’ve been a part of this and been able to balance having an impact socially and also handling my business on the field, so I have no concerns there.”

The Saints have won more regular-season games than any NFL team the past three seasons, only to be bounced from the playoffs on last-second or overtime losses.

Jenkins was a rookie on the Saints’ only championship team in the 2009 season and spent his first five NFL campaigns in New Orleans before moving to Philadelphia for the past six. He was lured back to the Big Easy by the chance to help his first NFL coach lift the already contending franchise back to the top.

“So as a leader, it’s just looking at like, well, how do we not mess this up? How do we continue to keep guys engaged and motivated and constantly striving to compete and improve and grow,” Jenkins said. “I know that’s one of the roles that I was brought here to produce, so that’s really what I’m focused on.”

Yet demands on Jenkins, the activist, have increased since the May killing of George Floyd by a white Minneapolis police officer spawned protests across the country.

And he felt compelled to respond publicly and harshly when Saints record-setting quarterback Drew Brees said in early June that he would “never agree with anybody disrespecting the flag” by kneeling during the national anthem, as ex-NFL QB Colin Kaepernick had done to promote awareness of racial injustice.

Brees quickly apologized, has said he now realizes racial justice demonstrations were never about the flag and has vowed to help Jenkins’ cause.

Likewise, Jenkins says he and the team have moved on productively.

“Me and Drew were friends long before 2020 and obviously the dialogue that he and I had to have publicly, but also privately, I think was important for the country to do and for us to do,” Jenkins said. “If anything, the team is probably closer for it because we’ve had to have those tough conversations."

Jenkins bristles at the notion that “we’re just athletes and don’t have anything to contribute to the conversation, or that we’re not experts.”

He draws inspiration from historical figures such as 1960s civil rights activist Fred Hampton, whose photograph, taken at a Chicago Eight protest, is on the wall behind the desk in his home office.

Jenkins added that although football “is very important to me and it’s what I love to do — I love this game and love playing it — I’m actually very OK with me being known more for my contributions to society than to the game.”

The 2009 first-round pick out of Ohio State has played on the only Super Bowl-winning teams New Orleans and Philadelphia have ever had.

He also is known for one of the most memorable hustle plays in Saints history on Thanksgiving Day 2010, when he raced down Dallas receiver Roy Williams after a long gain, stripped the ball and recovered the fumble deep in Saints territory. The play set the stage for a comeback victory.

“He’s very professional. I call him like a suit-and-tie guy,” Saints receiver Michael Thomas said. “He takes care of his business. You can see it when he walks into the building and then just how he’s about to play the game at a high level and still bring change to the world.”

Saints coach Sean Payton has openly expressed regret about ever letting Jenkins leave in free agency in 2014, and doesn’t sound worried about the veteran safety’s commitment to his team now.

“I’m excited for him,” Payton said when asked about Jenkins' position with CNN. “If that’s something that he’s going to pursue and wants to pursue when his career is over with, fantastic. He’s someone I know very well.”