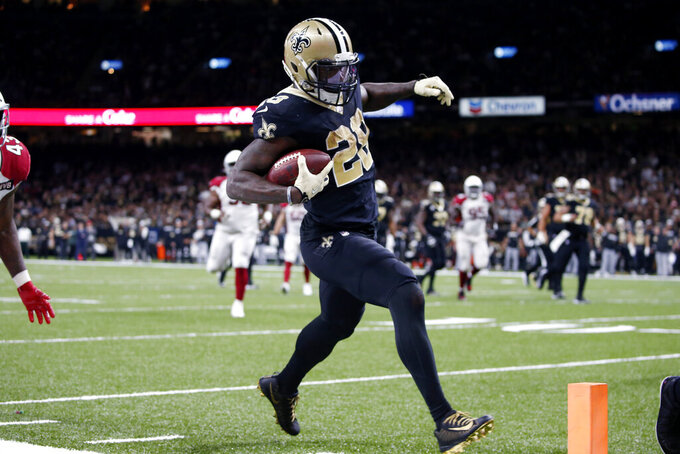 New Orleans Saints running back Latavius Murray (28) carries for a touchdown in the second half of an NFL football game against the Arizona Cardinals in New Orleans, Sunday, Oct. 27, 2019. (AP Photo/Butch Dill)

METAIRIE, La. (AP) — Alvin Kamara sounds ready to not only rejoin the New Orleans Saints on the field this week, but happy to share more snaps with resurgent running back Latavius Murray.

"I feel good. I practiced the last two days. I'm ready," Kamara, who missed two games with ankle and knee injuries, said after Thursday's practice. "I'm happy to be back, just happy to be back practicing on the field with my teammates, happy to be back kind of like a regular functioning member of this team, because when you're hurt you're kind of like on the backburner a little bit. You kind of miss out."

The versatile Kamara has been among New Orleans' most productive offensive players in both the running and passing games since 2017, when he was the NFL's offensive rookie of the year. In six games this season, he had 373 yards and one touchdown rushing along with 276 yards and one TD receiving.

Kamara said he initially sought to come back for New Orleans' Week 8 victory over Arizona, but changed his mind after visiting with team medical and training staff.

"Definitely anxious, you know, but sometimes you've got to take a step back and be smart," Kamara said. "You feel like you're ready, but it was the smart thing to do to wait another week."

"I knew he could. He's a good back. He's done it elsewhere," Kamara said, referring to Murray's Pro Bowl selection in 2015, when he played for Oakland.

Murray moved to Minnesota in 2017 and was signed by New Orleans as a free agent this past offseason when Mark Ingram left for Baltimore.

After rushing for 138 yards and one touchdown in his first six games combined, he rushed for 221 yards and three TDs in the Saints past two games, when he also had 86 yards receiving and his first career touchdown reception.

"Obviously, they're uniquely different, but we'll sort through that and figure that out," Payton continued. "Certainly, it was great to see the way Latavius stepped up and played really in a more multi-dimensional role than our normal rotation."

Kamara said when he noticed he was getting by far the bulk of snaps at running back in the first few weeks of the season that he spoke to Murray about it.

"I was like, 'Man, it's going to balance out. It's going to eventually balance out.' And he was like, 'I'm good. I'm not tripping,'" Kamara said. "So however it shakes out, it shakes out. I'm ready. It's not like I'm selfish. I don't need the ball every play. He's fully capable, too. So I think we'll get a good balance going, and it will be hard to stop."

"It's scary. We got so much talent. I think we know what we're capable of," Kamara said. "Knowing what we have, everybody's excited."