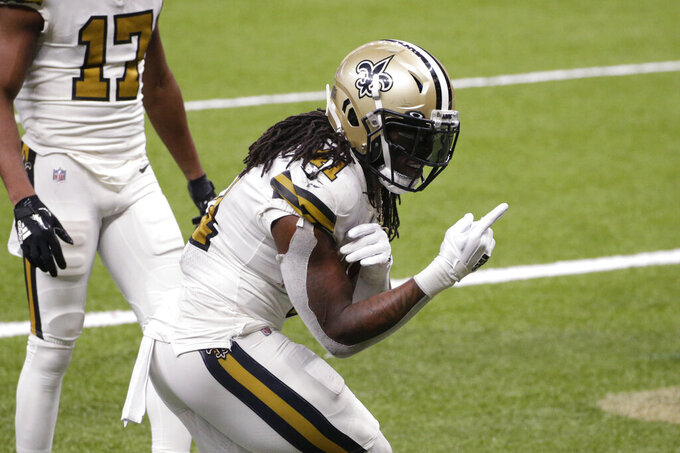 New Orleans Saints running back Alvin Kamara (41) reacts after his fifth touchdown of the game, in the second half of an NFL football game against the Minnesota Vikings54 in New Orleans, Friday, Dec. 25, 2020. (AP Photo/Butch Dill)

NEW ORLEANS (AP) — Saints running back Alvin Kamara and receiver Michael Thomas are in uniform for Sunday's playoff game against the Chicago Bears after returning to the active roster on Saturday afternoon.

Kamara has not been able to practice all week because of COVID-19 protocols and it has been rare for an offensive player under coach Sean Payton to play on a week when he wasn't able to participate in team drills. Kamara, who this season led New Orleans in both yards rushing and yards receiving during the regular season, has become an exception in the playoffs.

Thomas, who missed nine games this season largely because of an ankle injury, had practiced this week after being designated to return from injured reserve.

Also active for New Orleans is 2019 All-Pro returner Deonte Harris, who had a neck injury and like Thomas returned to practice from injured reserve this week and was added to the active roster on Saturday.

Safety Marcus Williams, who missed New Orleans' past two regular-season games with an ankle injury but practiced fully this week, also is in uniform.

Bears linebacker Manti Te'o, who played for the Saints the previous three seasons, was active on Sunday after being added to Chicago's active roster on Saturday.