Saints look to Winston, Hill, as they host improving Falcons 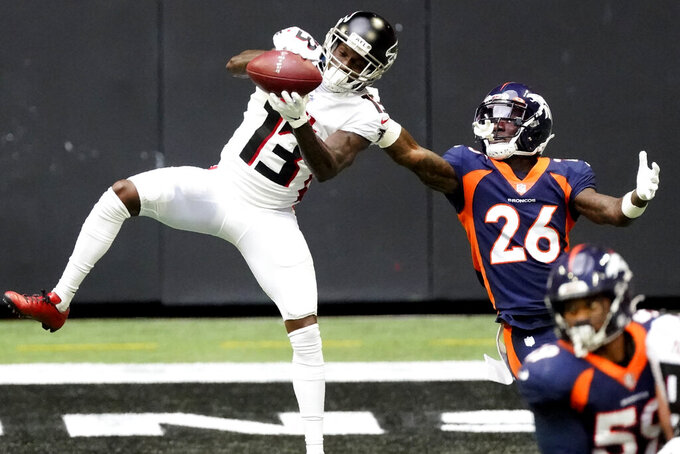 Atlanta Falcons wide receiver Christian Blake (13) makes the catch ahead of Denver Broncos defensive back Kevin Toliver (26) during the first half of an NFL football game, Sunday, Nov. 8, 2020, in Atlanta. (AP Photo/John Bazemore) 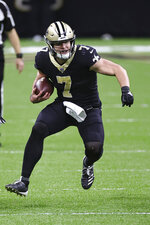 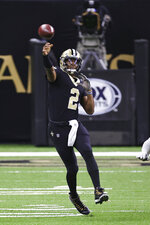 There is precedent for that. New Orleans went 5-0 in games Teddy Bridgewater started in 2019 while Brees was out with a hand injury.

The Saints (7-2), who've won six straight, host the Atlanta Falcons (3-6) on Sunday. New Orleans will begin another stint without Brees, whose ribs were injured on a big hit that forced him to sit out the second half of last week’s win over San Francisco.

“Last year, when Drew went down and Teddy came in, everybody really rallied around Teddy and did what they had to do to try to be perfect in their job,” Kamara said. “It’s a little more heightened sense of awareness because, obviously, it changes” when Brees isn’t running the offense.

For Winston, whose raw talent has never been in question, it’s an opportunity to start shedding a reputation for mercurial play that led the Buccaneers to let go of their 2015 first overall draft choice when they had a chance to replace him with six-time Super Bowl winner Tom Brady.

Last season, Winston joined an elite group of QBs in NFL history to pass for more than 5,000 yards and 30 TDs in a season. But he also threw 30 interceptions.

He arguably should have been intercepted again while playing in relief of Brees last week, but Niners safety Jimmie Ward dropped a risky pass over the middle that hit him in both hands.

“He’s had a significant amount of time to be with those guys, talking like 10 weeks to be with those guys and sitting behind Drew, who is arguably one of the best quarterbacks to play our game ... so he has to be better,” Morris said. “You can’t help but be better when you’re around those type of people and the right type of thing."

THIN AT THE EDGE

The Falcons are thin at defensive end after releasing Takk McKinley last week and placing Dante Fowler Jr. on the reserve/COVID-19 list. McKinley was claimed by Cincinnati but then was waived again after the Bengals said he failed a physical. McKinley battled a groin injury this season and has a history of shoulder problems.

Rookie Marlon Davidson, a second-round draft pick from Auburn who has four tackles in only three games, has been held out of the last two games following a knee injury and his stay on the reserve/COVID-19 list. Davidson, who also plays defensive tackle, has been handled with caution in his return and it is not known if he will play this week.

Fowler, who signed a three-year deal worth up to $48 million before the season, has two sacks and one forced fumble in eight games. He was recovering from a hamstring injury when placed on the COVID-19 list.

Morris said he’s asking for “an all-hands-on-deck mentality” at defensive end. “The challenge is for these guys to rush as a unit, to rush together.”

The Saints look increasingly well-equipped to keep winning without their star QB because of how their defense has played lately.

Last week, the Saints won despite having just 237 yards of total offense, the lowest figure in a New Orleans win since Brees and coach Sean Payton joined forces in 2006.

New Orleans ranks second in the NFL against the run and their secondary has started playing better. They’ve made five interceptions in their past two games, with veteran safety Malcolm Jenkins making one in each game.

“Every week, our confidence is growing,” said Jenkins, who returned to New Orleans this offseason after six seasons with Philadelphia. "Every week, we’re executing very well, playing a lot faster and a lot more physical and the team will need us to do that moving forward."

KINGS OF THE ROAD

The Falcons have won six consecutive road games against NFC South opponents. The streak began in Week 16 of the 2018 season with a win at Carolina and is the longest in franchise history. It’s the third-longest streak of road wins against divisional opponents in the NFL, but only the second-longest in the division. Kansas City (nine) and New Orleans (seven) have longer streaks of road success against division rivals.

The Falcons finished only 7-9 last season but won six of their last eight games, including visits to New Orleans, Tampa Bay and Carolina. This season, they’ve won three of their last four games under Morris following an 0-5 start. The resurgence has included a win at Carolina on Oct 29.

A key to Atlanta’s success with Morris has been the ability to control the clock. In the 0-5 start with former coach Dan Quinn, the Falcons’ average time of possession was 29 minutes, 07 seconds. In four games with Morris, the Falcons’ average of 35:12 leads the NFL. In that span, Atlanta has improved from 21st in the league to fourth with an overall average of 31:50. But this week they face a Saints squad that also is solid in that category, possessing the ball 31:39 per game, which ranks seventh.