Saints mindful of holes beyond QB in first post-Brees draft 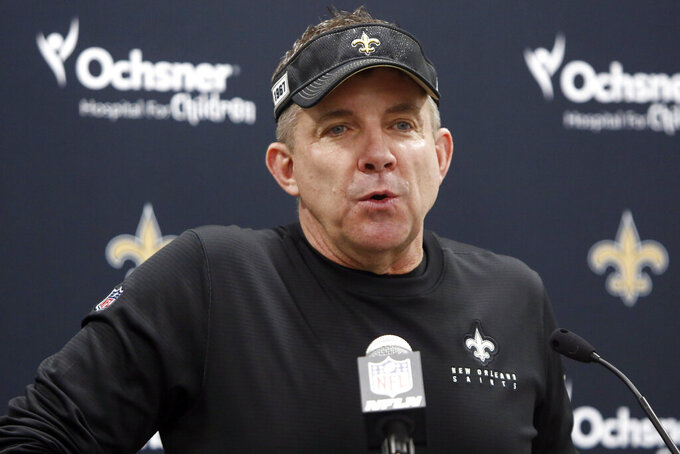 FILE - New Orleans Saints head coach Sean Payton speaks to the members of the media in Charlotte, N.C., in this Sunday, Dec. 29, 2019, file photo. The NFL will consult an advisory committee made up of former coaches, general managers and players on such issues as postponing, moving or even canceling games this season due to the coronavirus pandemic. The first New Orleans Saints draft since the retirement of all-time leading NFL passer Drew Brees might not include a quarterback. But a cornerback could be in the cards. Saints coach Sean Payton says the two Saints QBs under contract could very well be part of the club’s long-term future. (AP Photo/Brian Blanco, File)

NEW ORLEANS (AP) — As counterintuitive as it may seem, the first New Orleans Saints draft since the retirement of all-time leading NFL passer Drew Brees might not include a quarterback.

A cornerback, however, could very well be in the cards.

Saints coach Sean Payton has made it clear that two QBs under contract for next season — Jameis Winston and Taysom Hill — have potential to become part of the club's long-term future.

“I don’t think it’s a ‘must’ position," Payton said this week when asked about how high a priority finding a QB of the future would be in the 2021 NFL draft. “We’ve got two real good candidates under contract and we feel strongly about those guys.”

Hill, a former BYU standout who went undrafted because of his injury-plagued college career, went 3-1 filling in as starter while Brees was out with rib and lung injuries last season.

Winston won the 2013 Heisman Trophy with Florida State and was the draft's first overall pick by Tampa Bay in 2015. He spent last season as an understudy to Brees, trying to learn how to improve his reads and decision making in the hope of maintaining prolific passing numbers while cutting down on errant throws and turnovers.

If quarterback isn't a need, cornerback is. The Saints had to release a slew of prominent veterans in order to get player payroll under the NFL's 2021 salary cap. Among those trimmed from the roster was starting cornerback Janoris Jenkins.

“Corner is an area that we have to address here between now and the start of the season," Payton said. "We lost some good players we knew we might have to to get our numbers below. I think that’s part of operating in the salary-cap era.

“We knew there was going to be this post-Brees period of the time and I think overall I’m kind of pleased with how we’ve been able to manage the numbers,” Payton added. “When the process is complete and you’re dealing with training camp, you’re hopefully pleased with what you’ve been able to do with some of the losses.”

Expect the Saints to seek players ready to contribute right away. New Orleans may have lost a record-setting QB and a host of front-line players, but many top stars remain, including dynamic running back Alvin Kamara, two-time All-Pro receiver Michael Thomas, and defensive leaders such as linebacker Demario Davis, end Cameron Jordan and top cornerback Marshon Lattimore.

So the Saints are approaching the draft and ongoing free agency with the attempt to round out a roster that they still see making them a playoff contender.

“We’ve got a good core group of young talented players that have won a lot of games and that have experienced that taste of the postseason and I think you build your team around that,” Payton said. “You owe it to that roster to work hard and to put them in the best position to have success and that’s our responsibility.”

While the Saints have five of their top six offensive linemen from last season coming back, they had to shed some top regulars on the defensive line. Gone is end Trey Hendrickson, who led the team in sacks in 2020. The 2016 first-round draft choice Sheldon Rankins left in free agency and fellow veteran defensive tackle Malcom Brown was traded.

The only significant loss on the offensive line was guard Nick Easton, who remains a free agent and possibly could return on a more cap-friendly deal — if the Saints don't draft offensive linemen.

Payton noted that the 2021 draft class has “offensive line depth.”

Payton also mentioned tight end as a position that looks strong in the upcoming draft. And that spot could be a target for the Saints, who let top receiving tight end Jared Cook go and cut top blocking tight end Josh Hill because of the salary-cap crunch.

The Saints signed Nick Vannett away from Denver to help address depth at that spot. But they could look for another versatile receiving tight end to develop along with 2020 draft choice Adam Trautman, who became increasingly involved in the passing game late in his rookie season.

Whether these positions are addressed in early or later rounds, Payton emphasized the importance of hitting on mid- to late-round prospects. The Saints have done that in recent years with Kamara (third round, 2017), defensive tackle David Onyemata (fourth round, 2016) and safety Chauncey Gardner-Johnson (fourth round, 2019).

“To have a real good draft you have to select well" after the first round, Payton stressed.