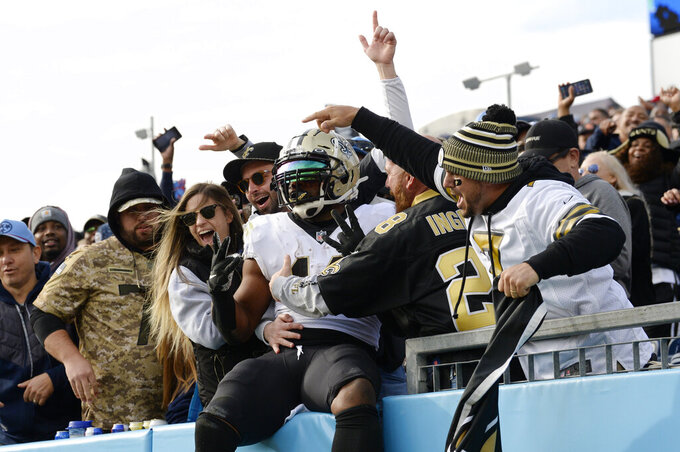 New Orleans Saints running back Mark Ingram celebrates with fans after scoring a touchdown against the Tennessee Titans in the second half of an NFL football game Sunday, Nov. 14, 2021, in Nashville, Tenn. (AP Photo/Mark Zaleski)

NASHVILLE, Tenn. (AP) — Not one, but two missed extra points. A false start on a 2-point conversion. A fumble on the opening kickoff of the third quarter. Four sacks allowed and nine total penalties.

No, the New Orleans Saints aren't happy at all about their missed opportunities to end the NFL's longest active winning streak. The Saints' 23-21 loss to the Tennessee Titans cost them a chance to move back atop the NFC South.

Mark Ingram, who became the franchise's all-time leading rusher in the third quarter, called it all “self-inflicted.”

“We all have our hands in it, we just have to be sharp and execute at all times,” Ingram said.

Instead, on a day Tampa Bay (6-3) lost, the Saints (5-4) missed a chance to take the division lead thanks to a head-to-head tiebreaker despite outscoring Tennessee 9-3 in the fourth quarter and playing without four-time Pro Bowl running back Alvin Kamara and left tackle Terron Armstead because of injuries.

The issues started early as the Saints gave up four sacks — all in the first half.

Brian Johnson missed both extra points wide left, and his first would have put New Orleans up 7-6 early in the second quarter after Siemian's first of two TD passes. His second left New Orleans trailing 20-12 after Ingram's 13-yard TD run in the third quarter.

Johnson made a 20-yard field goal with 5:33 left after the Saints failed to score on five plays with goal to go.

The Saints also had an interception in the end zone by safety Marcus Williams wiped out by a questionable roughing-the-passer penalty on linebacker Kaden Elliss. The Titans finished off that drive with a TD.

“I didn’t think it was a roughing the passer, but the ref did, so we just have to keep going and keep playing and find a way to get off the field,” Saints linebacker Kwon Alexander said.

Saints coach Sean Payton made only brief comments to reporters after the game. He said he didn't get an explanation on the roughing penalty and had no opinion.

Still, the Saints had a chance to force overtime after Siemian found Marquez Callaway on a 15-yard TD pass with 1:16 left. The Saints lined up from the 2, but tight end Adam Trautman moved for a false start penalty — New Orleans' ninth — backing them up to the 7.

“Yeah, it hurts,” Siemian said. “Obviously down there it gets loud. There’s some movement. There’s a lot of communication that happens, but yeah, certainly if you convert on the 2 versus on the 7, it’s probably a little, the odds are probably a little better there.”

Instead, Siemian threw to Ingram, only to have the ball hit the ground. Ingram said a Titans defender got his got his hands on top of his.

“I was looking the ball into my hands, and I feel like his hands were just right above mine,” Ingram said. “Tough game like that, you always think of what you could’ve done more to help the team win. So, that was frustrating. I wish I could’ve made that play to continue the game.”

That was the eighth straight 2-point conversion the Saints have failed to convert.

The Titans (8-2) recovered the onside kick and finished off their sixth straight victory.

With Tampa Bay losing 29-19 to Washington, the Saints remain only one back in the loss column in the division. They visit Philadelphia next.

“We just have to figure out a way to win, and we’re going to do that,” Alexander said.