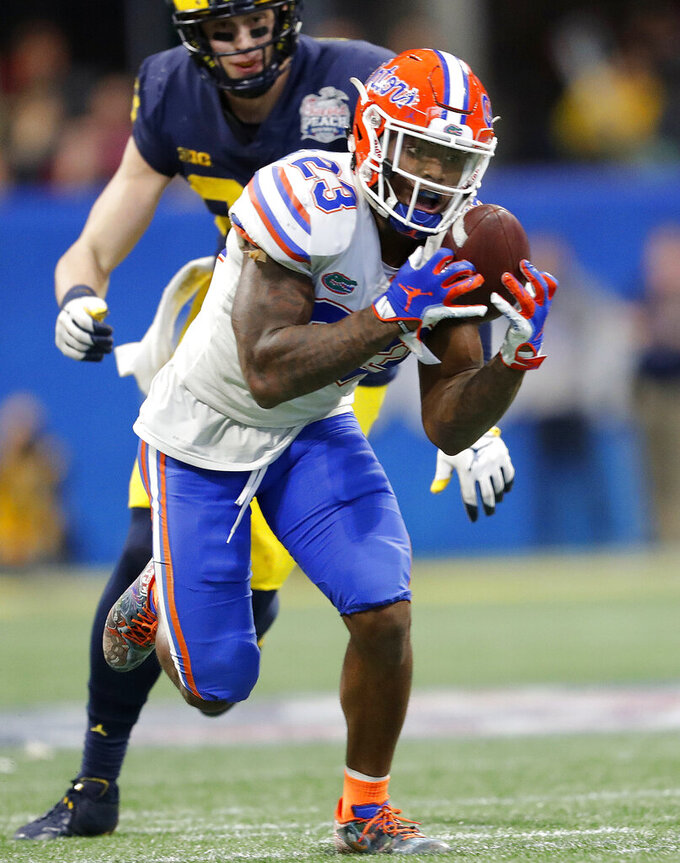 FILE - In this Dec. 29, 2018, file photo, Florida defensive back Chauncey Gardner-Johnson (23) makes the catch for an interception against Michigan during the second half of the Peach Bowl NCAA college football game, in Atlanta. Gardner-Johnson is a possible pick in the 2019 NFL Draft. (AP Photo/John Bazemore, File)

METAIRIE, La. (AP) — The New Orleans Saints have traded up for the second time in this year's NFL draft to select Florida safety Chauncey Gardner-Johnson early in the third round.

The Saints made a deal with the Jets to move up 11 spots and select the 5-foot-11, 210-pound Gardner-Johnson 105th overall. The selection adds depth to a position group that could use it after New Orleans' decision to release veteran safety Kurt Coleman.

Saints also one pick in the sixth round and two in the seventh and used the first of those to select Rutgers safety Saquan Hampton at 177 overall.

In the final round they took Notre Dame tight end Alize Mack at 231 overall and Idaho linebacker Kaden Elliss at 244.

In Friday night's second round, the Saints made a deal with Miami to move up 14 spots and take Texas A&M center Erik McCoy.

New Orleans did not have any picks in the first or third rounds because of 2018 trades.