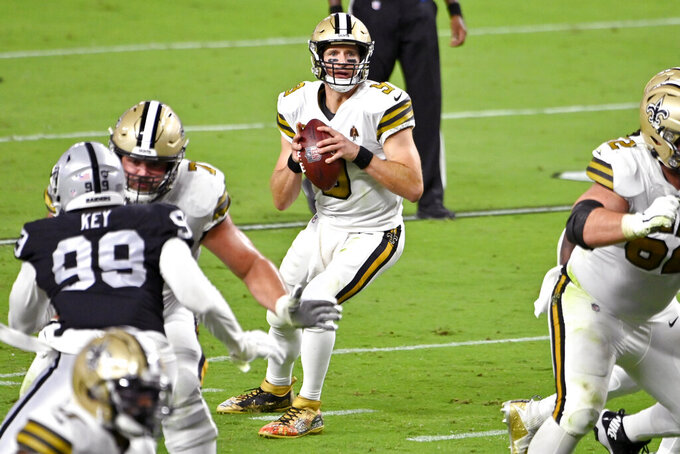 New Orleans Saints quarterback Drew Brees (9) drops back to pass against the Las Vegas Raiders during the first half of an NFL football game, Monday, Sept. 21, 2020, in Las Vegas. (AP Photo/David Becker)

That was arguably the case even before Michael Thomas was sidelined by an ankle injury in Week 1, and the absence of the two-time All-Pro receiver only seemed to further hamper the Saints’ aerial attack during a loss in Las Vegas on Monday night.

“We’re not even close to what we are capable of,” Brees asserted. “We’re just inconsistent right now.”

Inconsistency makes it tough to sustain drives and score points. That mattered less in Week 1, when the Saints’ defense came up with a pair of interceptions, including one returned for a touchdown, in a victory over Tampa Bay.

But when New Orleans’ defense struggled against the Raiders, the Saints offense couldn’t keep up. An early 10-point lead was gone by halftime after Brees’ first interception of the season led to a Raiders field goal. And by the end of the Raiders' 34-24 triumph, Las Vegas had possessed the ball for 12:36 more than New Orleans.

Saints coach Sean Payton, who designs and calls the offense, stressed that there are several factors largely beyond a quarterback’s control that can make the passing game look good or bad. Namely, it's the quality of blocking and receivers’ route-running.

If either are off, it can affect a quarterback’s timing and accuracy, two things which have appeared below Brees’ standard during the first two games this season. After completing better than 74% of his passes during the past two seasons, Brees connected on 60 percent in Week 1 and 68.5% in Week 2.

“We’ve got to be precise with what we’re doing in the passing game route-wise,” Payton said, adding that pass blockers are “still not protecting the way we’re supposed to.”

In all, Payton said, “the last two weeks, it’s been average at best offensively.”

The good news for New Orleans is that it’s early, and the Saints have a record during recent years of regrouping effectively after early season stumbles.

New Orleans won more regular-season games than any NFL team during the previous three seasons despite failing to start any of those better than 1-1.

That's the record the Saints have now, and it's good enough to have them still tied atop the NFC South as they chase a fourth straight division title.

Getting the ball to versatile running back Alvin Kamara. He was among the few bright spots for New Orleans in Las Vegas, with 174 yards and two TDs from scrimmage, including nine catches for 95 yards. Both of his touchdowns came on runs.

The passing game, particularly downfield. Brees' emphasis on avoiding sacks has led him to opt for quicker, shorter throws. Brees says he’s fine with doing that as long as the offense is in rhythm and sustaining drives. But that hasn’t been the case lately.

“I’ve always evaluated myself on being a great decision-maker,” Brees said. “My job is not to have the most air yards or throw downfield the most. ... We just need to be more efficient.”

Tre’Quan Smith was more involved in the offense with Thomas sidelined. Smith, a third-year pro out of Central Florida, had five catches for 86 yards.

The whole secondary, which struggled to deal with Raiders tight end Darren Waller and committed multiple pass interference or defensive holding penalties totaling more than 50 yards. Safety Malcolm Jenkins was among the primary defenders — but not the only one — on Waller, who finished with 12 catches for 103 yards and a TD.

Starting left guard Andrus Peat left the game in the second half. His status for Week 3 is unclear, as it is for starting defensive end Marcus Davenport (elbow) and of course, Thomas, who set an NFL record last season with 149 catches but had just three receptions in Week 1 before his ankle sprain.

248. The number of penalty yards the Saints have given up through their first two games, including 150 yards on defensive pass interference.

The Saints have a short week in which to try to shore up several areas by Sunday night, when they host a 2-0 Green Bay squad that has crossed the 40-point threshold in each of its first two games. As in Week 1, there will be no fans in the Superdome because of the coronavirus pandemic.