Saints opener vs. Packers moved to Jacksonville after Ida 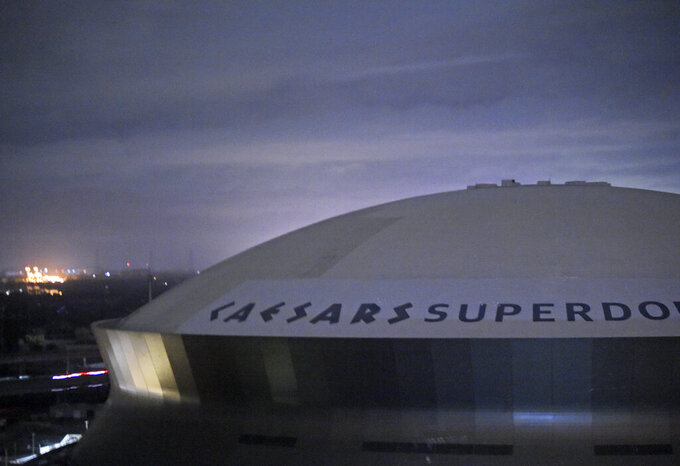 As if adjusting to life without Drew Brees wasn't enough, the New Orleans Saints will now have to travel from their temporary practice home in Texas to Florida to play their regular-season opener that was originally scheduled for New Orleans.

Now displaced by Hurricane Ida, they'll play their home opener against Green Bay in Jacksonville on Sept. 12 after practicing in Dallas for the better part of two weeks — a scenario reminiscent of their 2005 season of displacement after Hurricane Katrina struck.

The NFL announced the Saints announced the venue change three days after Ida battered the Louisiana coast as a Category 4 hurricane and left the entirety of New Orleans in darkness until small pockets of the city began to get power back on Wednesday.

“Knowing what’s going on back there (in New Orleans) and us not being able to be there to help, it’s kind of unsettling,” Saints running back Alvin Kamara said. “But we’re doing what we can.”

While the Superdome appears to have come through the storm in decent shape, there are logistical challenges with staffing an NFL game there in the near future because of widespread wind damage in the metro area and mass evacuations both before and since the powerful storm struck.

“I am proud of the collective communications that occurred between many entities in a short amount of time that led to us making this decision,” said Saints owner Gayle Benson. “It is never easy to make a decision that involves not playing a Saints home game in the Caesars Superdome, but I am confident that this is the right decision for our city at this juncture.”

General manager Mickey Loomis said the Saints expect to play a lot of home games at the Superdome this season.

After the opener, the Saints have road games at Carolina and New England before their next scheduled home game Oct. 3 against the New York Giants. Two more road games and their bye week follow before they host defending Super Bowl champion Tampa Bay on Oct. 31.

“It’s sometimes tough to keep the focus on it when there’s so much going on and so many people are affected. But at the end of the day, we got a job to do,” Kamara said. "We just got to keep moving and find ways to combat it and stay focused.”

Packers general manager Brian Gutekunst admitted his team played no real role in the decision to play in Jacksonville, which is at Houston on Sept. 12.

“I don’t think we had a whole lot of say," he said. “I think obviously they worked with us, but it’s, I think with this being a New Orleans home game, it wasn’t a lot of say from our view.”

Packers coach Matt LaFleur offered his best to “everybody in New Orleans,” adding:

"That’s a bad deal that they’re going through so we’ll adjust, and I think, yeah there are some adjustments ... some positives that it probably won’t be quite as loud. But the negative is that it’s hard to simulate that kind of heat, so our guys are going to have to do a great job of hydrating and taking care of their bodies all week.”

The Saints evacuated New Orleans before the storm to North Texas, and have practiced this week at AT&T Stadium, the home of the Dallas Cowboys. They are remaining in Texas for workout s next week, and will travel to Jacksonville the day before the season opener.

“We’ve got a firm plan for the next week of preparation. ... We’ve got a place to practice and a place to stay for our team,” Loomis said. “I don’t think there’s anything really too unique about playing on the road if we have to do this Week 1, because we’re going to do that Week 2 and Week 3. So it’ll be a normal road trip, it’s just departing from here.”

The arrival of Ida came 16 years to the day after Hurricane Katrina devastated New Orleans. The Saints were forced to move for the entire 2005 season, setting up operations in San Antonio while playing home games there and in Baton Rouge at LSU. After winning their season opener at Carolina that season, New Orleans lost their “home opener” at Giants Stadium and subsequently languished through a 3-13 campaign that led to the firing of then-coach Jim Haslett.

Spurred on by the quick restoration of the Superdome, the Saints went 10-6 and won the NFC South in 2006, Sean Payton's first season at coach and Brees' first of 15 seasons as New Orleans' QB.

In the 2009 season, with swaths of damage from Katrina's widespread flooding still lingering in various pockets of the city, the Saints won their first Super Bowl, with Brees the game's MVP. The city's recovery continued to pick up steam from there, with the ever-popular Brees and the Saints at the center of fundraising and community service projects to push the rebuilding along.

In recent years, any enduring scars from Katrina have been difficult to find, and many parts of the city have looked as polished as ever. That includes the Superdome, where another renovation project was completed this summer, adding end zone suites and viewing platforms that overlook the four corners of the field, and where fans can mix as they search out refreshments.

But the COVID-19 pandemic has ravaged the city's renowned tourism industry. New Orleans lost a women's Final Four in 2020. It has also seen the past two Jazz and Heritage Festivals canceled. And while the Saints played last season, the 73,000-seat Superdome was largely empty for most of it because of crowd restrictions.

The Saints have planned to play before full crowds this season — albeit with requirements that all fans wear masks and those older than 12 provide proof of vaccination. But now the hospitality industry has lost at least one of those games.

Other than a regularly scheduled game in London as part of the NFL's international series, Brees never had to play a home game that had been moved away from the Superdome. That's something his successor, Jameis Winston, will have to do in his very first start. But Winston should have some fans in Florida, having won the 2013 Heisman Trophy and college football national title with Florida State, and having spent his first five pro seasons as Tampa Bay’s starter.

Also, Saints season ticket holders will have access to tickets for the opener before they go on sale to the general public. For those who might still be waiting for power to come back on in the New Orleans area, a weekend on the north Florida coast might be attractive for more reasons than a Saints game.

By David Brandt 55 minutes ago
By Teresa M. Walker an hour ago
By Josh Dubow 5 hrs ago
By Tom Withers 12 hrs ago
By Dennis Waszak Jr. 12 hrs ago