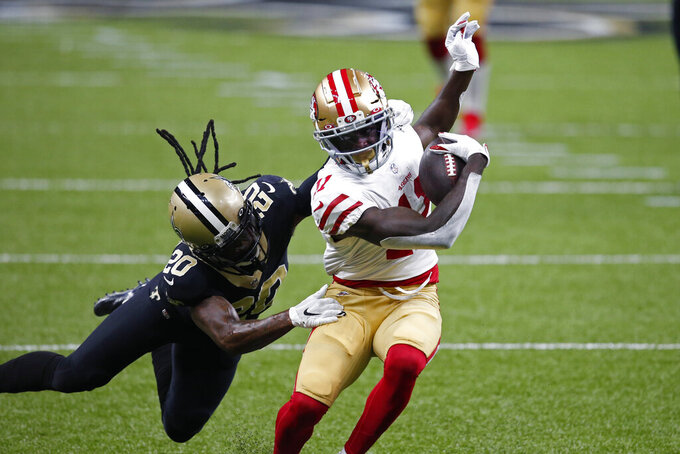 NEW ORLEANS (AP) — Drew Brees struggled to predict the long-term effects of a crushing hit by San Francisco defensive tackle Kentavius Street, who landed on top of the 41-year-old quarterback after de-cleating him with a clean shot.

Brees only knew that despite how effective he was on a touchdown drive at the end of the first half, his body wouldn't let him continue beyond that on Sunday.

“When I came out in the second half and started throwing the ball (to warm up), it became really apparent that I wasn't going to be effective,” Brees said. “I'm not sure what tomorrow holds, but you can know I'm going to do everything I can to be as effective as I possibly can for next week.”

The rest of the New Orleans Saints overcame Brees’ second-half absence for a 27-13 victory over the 49ers, using Alvin Kamara's three touchdowns and a strong performance by their defense to secure their sixth straight victory.

But now it's unclear who the starting quarterback will be when the Saints (7-2) host Atlanta next weekend.

Brees said he didn't expect the injury to be “a long-term thing," but added, ”it's just a matter of how long it's going to be. And honestly, I really don't know. It's not something quite to this extent that I've experienced."

Officials flagged Street for a personal foul, ruling he violated the NFL's “bodyweight rule,” which bans defenders from landing on a defenseless passer with all or most of their weight.

Brees did not criticize Street's hit, saying only that he overheard the officials' explanation that, “by rule,” it was a foul.

The 49ers (4-6) largely disagreed. Some coaches were pulled back by fellow staff as they yelled angrily at officials.

San Francisco defensive end Kerry Hyder said Street "did a great job of falling on the side. It was just one of those calls."

Brees missed two plays after the hit and returned for a third-down pitchback to Kamara that resulted in a 2-yard touchdown that tied it at 10.

Brees continued to play for the rest of the second quarter, going 5 for 6 on a two-minute drive that he completed with a 3-yard touchdown toss to Kamara that made it 17-10 just before halftime.

“I actually felt terrible before the 2-minute drive, but I had to find a way,” Brees said.

Backup Jameis Winston completed six of 10 passes for 63 yards and was nearly intercepted by safety Jimmie Ward, who dropped a pass that hit him in the hands. Read option QB Taysom Hill also took snaps periodically.

Nick Mullens passed for 247 yards and a 4-yard touchdown to Brandon Aiyuk on San Francisco's first series. But he also was intercepted twice in Saints territory, once by safety Malcolm Jenkins and once by cornerback Patrick Robinson.

“We couldn’t get anything going in the second half and didn’t get much out of our running game," coach Kyle Shanahan said. "Then those turnovers killed us. It was not close to good enough.”

Kamara, as he has been most of the season, was New Orleans' most productive skill player, gaining 98 yards from scrimmage, including 83 yards on seven receptions.

The Niners raced to a 10-0 lead, but their own mistakes helped New Orleans respond with 27 straight points.

Kamara's first and third TDs were set up by turnovers on 49ers punt returns. The first occurred in the second quarter when the ball glanced off the shoulder of Ken Webster, who was trying to block on the play but ventured too close to where the punt bounced. The second came after a muff by returner Richie James.

The Saints have allowed one touchdown in their past two games and spoke confidently about their growth from earlier this season, when coach Sean Payton said he was concerned about periodic coverage busts.

“We're just locking in and getting settled,” Saints defensive back C.J. Gardner Johnson said. “We're trying to become a great defense. We're not trying to be good, trying to be average. ... I don't like talking. I like to go out there and play. That's what we've been doing and giving y'all results.”

Saints: In addition to Brees, receiver Tre'Quan Smith appeared to be briefly knocked unconscious on a hit by Ward while trying to make a catch over the middle in the second quarter. He left the game with concussion symptoms. Tight end Josh Hill also left the game with a concussion in the second half. Left tackle Terron Armstead appeared to injure his right ankle in the fourth quarter. Defensive tackle Malcom Brown injured his calf. Cornerback Marshon Lattimore left with an oblique injury, but could be seen standing on the sideline without his helmet in the second half, urging on teammates and even dancing at times.

49ers: Head into their bye week, followed by a visit to the Los Angeles Rams on Nov. 29.