Saints' Payton wants lessons from loss to Giants to stick 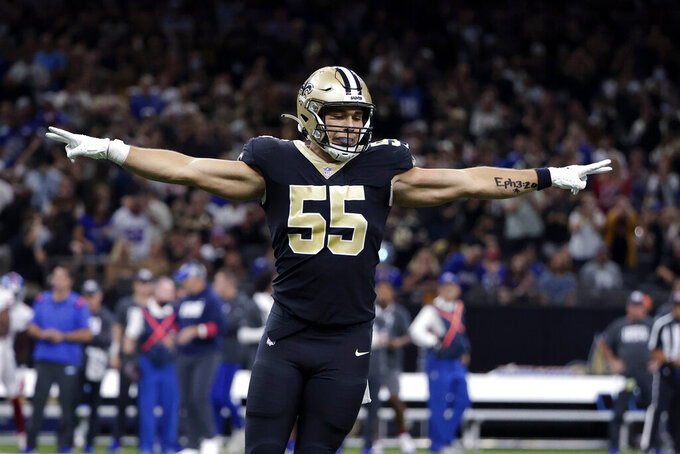 New Orleans Saints linebacker Kaden Elliss (55) reacts to a defensive stop in the first half of an NFL football game against the New York Giants in New Orleans, Sunday, Oct. 3, 2021. (AP Photo/Derick Hingle)

A new week brings a new game, new matchups and a new scheme that may emphasize some players and de-emphasize others relative to the previous week.

But on Monday, the Saints' fourth-quarter collapse against the previous winless New York Giants in a 27-21 overtime loss was still bothering New Orleans' longtime coach.

“That game’s over, but we’ve got to learn from it,” Payton stressed.

The Saints (2-2), now in their first season since the retirement of record-setting quarterback Drew Brees, appeared on their way to being 3-1 and tied atop the NFC South, which they've won the past four seasons.

Instead, Payton was left hinting at an apparent loss of focus and intensity in the fourth quarter against the Giants, whose defense suddenly forced the Saints to punt after just three plays after New Orleans had taken possession, up by 11, with about nine minutes remaining.

Before that series, the Saints had crossed midfield on their previous seven possessions, scoring three touchdowns.

“It comes down to having pride in having the ball at the end of the game and having the determination to going to get those few first downs we needed to put the game away,” offensive lineman Calvin Throckmorton said. “As an offensive line, we pride ourselves on doing that. We felt we were running the ball well yesterday, but ultimately have to be better at the end of the game. That’s really what it comes down to.”

Meanwhile, the Giants' offense began moving the ball at will, scoring a touchdown with a 2-point conversion and a tying field goal on successive possessions to close regulation and force the extra period. After the winning the coin toss, New York methodically marched for a winning touchdown against a Saints defense that looked helpless to stop them after having held New York to just 10 points for three-and-a-half quarters.

The running game remained a strength despite New Orleans missing two starting offensive linemen, center Erik McCoy and left tackle Terron Armstead. New Orleans rushed for 170 yards as a team, led by Alvin Kamara's 120 yards on 26 carries. Even the passing game looked better with Winston throwing for more than 200 yards for the first time as a Saint, to go with a touchdown that marked his third connection with tight end Juwan Jonson for a score in the young season.

The Saints' pass defense, solid through the first three weeks, had some key breakdowns that Payton wants addressed this week after Giants QB Daniel Jones passed for a career-best 402 yards, including two scoring plays longer than 50 yards. As the game wore on, New Orleans defenders started missing more tackles.

Payton said the Saints entered the game with an emphasis on eliminating explosive plays, but the Giants “had a number of big plays, particularly in the passing game.”

“I didn’t think we tackled as well as we’d like to in space,” Payton added.

New Orleans also was unable to get to Jones, who is a strong runner. The Saints did not register a sack.

Reserve QB and utility player Taysom Hill rushed for a pair of 8-yard touchdowns, completed two passes for 9 yards and had two catches for 26 yards. Although he was intercepted on a deep pass, his productivity put the Saints in position to win against New York before they faded in the fourth quarter.

Tight end Adam Trautman, who was expected to have an increasingly prominent role as a receiver, had just one catch for 3 yards. He also was flagged for a holding call that wiped out a long touchdown pass from Winston to Kenny Stills, although Payton noted that New Orleans' blocking scheme on that play left Trautment in a tough matchup with Giants defensive end Leonard Williams.

Running back Tony Jones Jr. had to be carted off the field with an ankle injury. The Saints are awaiting the return of McCoy from a Week 1 calf injury and Armstead from a Week 3 elbow injury. It's unclear if either will be ready this week.

203 — Passing yards allowed by the Saints' defense in just the fourth quarter and overtime against New York.

The Saints visit Washington looking to get back above .500 before entering a bye week that comes at an opportune time as several key players on offense try to work their way back from injuries.