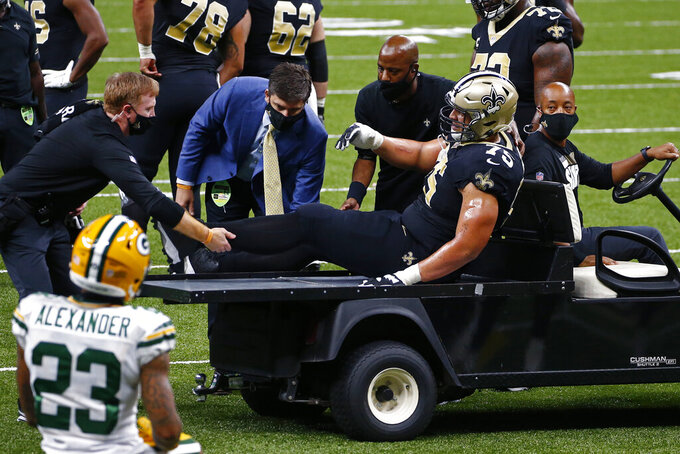 New Orleans Saints offensive guard Andrus Peat (75) is tended to after being injured in the first half of an NFL football game against the Green Bay Packers in New Orleans, Sunday, Sept. 27, 2020. (AP Photo/Butch Dill)

NEW ORLEANS (AP) — Saints starting left guard Andrus Peat was carted off the field late in the first half of Sunday night's game against Green Bay with what the club said was an ankle injury.

Peat remained down on the field after running back Alvin Kamara was tackled into the back of his lower legs.

Peat, a 2015 first-round draft choice by New Orleans, is in the first year of a five-year extension worth $57.5 million.

The 26-year-old Peat turned pro after starting two years at left tackle for Stanford. His versatility has been useful to New Orleans, which converted him to a guard but has continued to also use him as a substitute tackle as needed.

The 6-foot-7, 316-pound Peat has been selected to the Pro Bowl each of the past two seasons and has contributed to an offense that has averaged an NFL-best 394.8 yards per game during the past five seasons.

Also, Packers linebacker Christian Kirksey was briefly on one knee during the second quarter while receiving treatment from Green Bay medical staff. The club said he would not return to the game because of a shoulder injury.