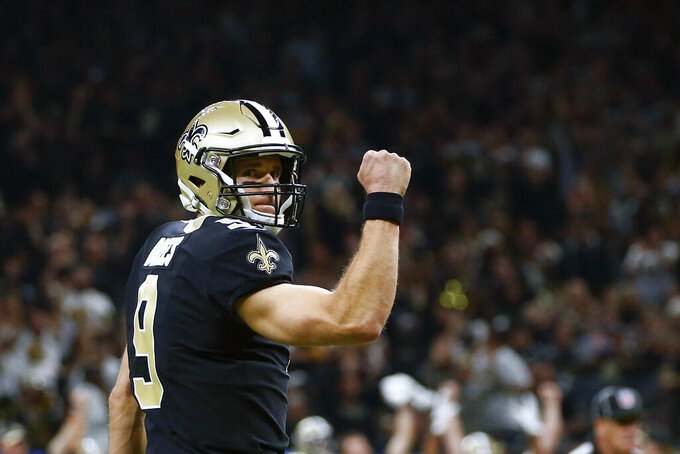 FILE - In this Dec. 23, 2018, file photo, New Orleans Saints quarterback Drew Brees reacts after a touchdown carry by running back Alvin Kamara, not pictured, in the first half of an NFL football game against the Pittsburgh Steelers, in New Orleans. The NFC South’s reputation as the NFL’s most balanced division has taken a hit. The New Orleans Saints’ two-year run as division champion, including a dominant showing in 2018, has left other teams eager to prove there is still parity in the South. (AP Photo/Butch Dill, File)

Strengths: QB Drew Brees has been highly efficient at executing coach Sean Payton's offense for decade-plus. Although Brees is 40, he has yet to show considerable decline. WR Michael Thomas is elite, should be even tougher to cover with addition of receiving TE Cook. RB Alvin Kamara has been problematic for defenses because of versatility as runner and receiver. DE Cam Jordan, LB Demario Davis and CB Marshon Lattimore give Saints talent and leadership at each level of defense. Kicking game excelling with veteran P Thomas Morstead and strong-legged PK Wil Lutz.

Expectations: Saints have won NFC South two years running and held leads in final 30 seconds of each of past two playoff losses. Two seasons ago, Stefon Diggs scored 61-yard TD — "Minneapolis Miracle" — as time ran out. Last season was "NOLA no-call," in which officials missed helmet-to-helmet hit and pass interference penalties against Rams, helping Los Angeles rally to tie NFC title game with 15 seconds left in regulation and win in OT. Most prominent players are back from those two seasons and hungry as ever.