Saints QB Brees says playing against Cardinals is 'the plan' 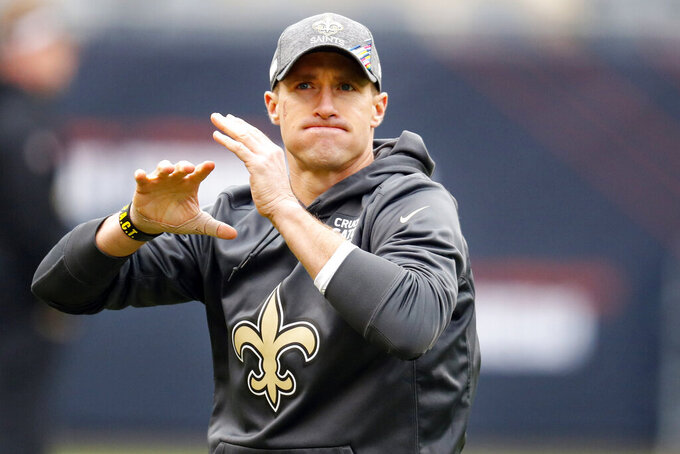 FILE - In this Sunday, Oct. 20, 2019, file photo, New Orleans Saints quarterback Drew Brees (9) works on his throwing motion before NFL football game against the Chicago Bears in Chicago,. Brees says he is comfortable throwing an NFL ball now that he is more than five weeks out of surgery on his right thumb. He says he plans to play Sunday against Arizona unless his form in practice this week does not meet his expectations. (AP Photo/Charles Rex Arbogast)

METAIRIE, La. (AP) — Drew Brees pulled a football out of his locker inside the New Orleans Saints' training headquarters and wrapped his right hand around it, splaying his surgically repaired thumb away from his forefinger.

The demonstration of how far he's progressed in his rehabilitation since his Week 2 injury left no doubt about his intent to tell coach Sean Payton he's ready to play this Sunday against the Arizona Cardinals.

Brees affirmed that he does indeed feel like himself and that he threw the ball well at practice Wednesday but added that he wants to see how he performs throughout the week in team drills to ensure his accuracy, timing and overall effectiveness meets his standards.

"I need some competition," Brees said.

Brees said that, technically, his thumb won't be fully healed until he's three months out of surgery, which was performed on his ulnar collateral ligament in Los Angeles on Sept. 18. But Brees noted that a surgically inserted internal brace provides enough support for him to grip the ball firmly now, five weeks later.

"Today it was good to have him out there throwing," Payton said. "He's done a great job with his rehab.

"He's been medically cleared to play," Payton added. "He's got the strength and all of those things necessary when it's on your throwing hand — and your thumb is almost 50 percent of that. But we'll assess it day by day ... and we might have to wait until Sunday to see if he's playing."

With backup QB Teddy Bridgewater filling in, the Saints (6-1) have won all five games Brees has missed since his injury during New Orleans' Week 2 loss to the Rams in Los Angeles.

They enter their bye week after this Sunday, meaning that if Brees didn't play against Arizona, he'd have seven weeks of rest before returning in Week 10 against Atlanta. But Payton asserted that he doesn't hold players out of action longer than necessary because every victory counts the same, no matter the perceived strength of a given week's opponent.

The Cardinals are 3-3-1 after winning three straight.

"I think a lot of people from the outside in say, 'Well, let's rest him one more week, then we have a bye week,'" Payton said. "Look. If he's ready to play, he's ready to play. This game's an important game just as the first game after the bye is important. So our approach will be just that."

Brees, listed as limited in practice on Wednesday's injury report, said that throughout his recovery he's been training to throw — even when he couldn't grip a ball — by working on all the parts of the body, from head to toe, involved in the mechanics of delivering a pass with optimum velocity and accuracy.

Brees noted that he's been throwing for several weeks, starting with his children's foam footballs, followed by the inflatable, blue-and-while balls used in the youth flag football league he started. He began throwing regulation NFL balls about two weeks ago.

And Brees has been staying engaged in games from the sideline.

"It's just like being in training camp, you know, when you step off and the next group jumps in and you're watching the defense, you're going through the mechanics of what you would do and how you would be thinking in your progression," Brees explained. "So that's how you stay on point. And that's how you stay and keep that edge is just playing the game in your mind."

In the meantime, Brees said Bridgwater was "phenomenal," as was the rest of the team during the past five weeks.

The 40-year-old Brees, who is the NFL's all-time leader in completions and yards passing, threw for 408 yards and two touchdowns in about five quarters of play to start the season. During the five games Brees, missed entirely, the Saints passed for more than 273 yards once, when three players combined to pass for 345 yards against Tampa Bay. Bridgewater passed for 314 yards and four TDs in that game, with Taysom Hill adding an 18-yard pass and running back Alvin Kamara completing a 13-yarder.

The Saints adopted a different style of play during that stint, and relied heavily on their defense and special teams to tip the balance in their favor. The Saints have held four straight opponents to 257 or fewer yards. They also had a punt return touchdown against Seattle, a blocked punt in Chicago for a safety and downed numerous punts inside the opponents' 20-yard line.