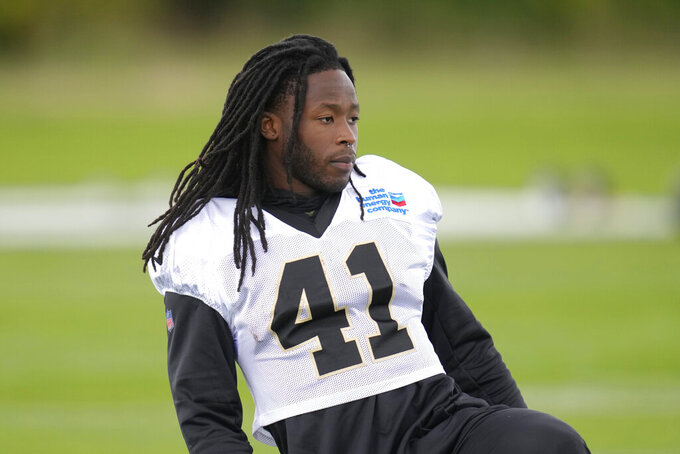 New Orleans Saints running back Alvin Kamara looks on during an NFL practice session at the London Irish rugby team training ground in Sunbury-on-Thames near London, Wednesday, Sept. 28, 2022 ahead of the NFL game against Minnesota Vikings at the Tottenham Hotspur stadium on Sunday. (AP Photo/Kirsty Wigglesworth)

NEW ORLEANS (AP) — A lawsuit filed this week against New Orleans Saints running back Alvin Kamara seeks $10 million in damages and a jury trial in connection to an assault in Las Vegas during Pro Bowl weekend.

Kamara already faces a felony battery charge in the alleged assault of Darnell Greene Jr., who was leaving a club at a hotel and casino at about 6:30 a.m. Feb. 5. Kansas City Chiefs cornerback Chris Lammons also has been charged, as well as Darrin Young and Percy Harris.

Kamara played in the Feb. 6 Pro Bowl before he was arrested. The NFL has not taken any action against Kamara or Lammons, who are both playing this season.

The lawsuit, which was filed Friday in Civil District Court of Orleans, includes stills from surveillance footage at the the hotel and casino, as well as a photo of Greene after the beating and details from the police report.

Greene was punched in the face and stomped on near an elevator, and was unconscious for “over two minutes.” The lawsuit claims Kamara “deliberately used violent force against (Greene) with the intent to inflict actual damage.”

Greene's orbital lobe was broken and he had severe injuries to his shoulder, back, head, knees, face and neck, the lawsuit said.

Greene, of Houston, is represented by the Buzbee Law Firm, which also was involved in the numerous lawsuits against Browns quarterback Deshaun Watson, and the New Orleans-based firm Garner & Munoz.