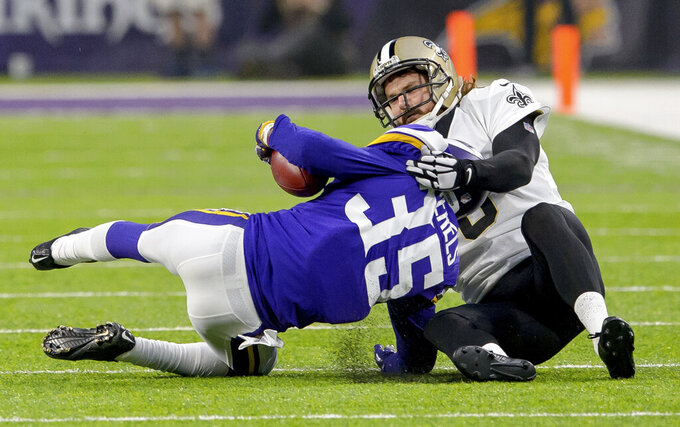 FILE - In this Jan. 14, 2018, file photo, New Orleans Saints punter Thomas Morstead (6) injures his ribs on a touchdown saving tackle of Minnesota Vikings cornerback Marcus Sherels (35) during the first half of an NFC divisional playoff NFL football game in Minneapolis, Minn. Morstead is one of just two current Saints players who played in the NFC title game against the Vikings in January 2010. The other is quarterback Drew Brees. (Matthew Hinton/The Advocate via AP, File)

“I remember after the game was over, I didn’t expect it to be as emotional as it was. I found my family and everybody was in tears and I was surprised," Morstead recalled of the scene in the Superdome after the Saints beat the Vikings 31-28 in overtime in the NFC title game in January 2010.

“I knew I would be excited if we won, but I mean, you saw so many people that were crying,” Morstead continued. “I didn’t realize at the time, obviously, how big a deal it was to the whole city.”

Morestead was a rookie out of SMU in the 2009 season and is one of just two current Saints players — along with 40-year-old quarterback Drew Brees—— who played in that NFC title game. No Vikings players and only one assistant are left from that team.

This Sunday's NFC wild-card round game between Minnesota and New Orleans in the Superdome will be the third playoff meeting in the past decade between these teams.

While New Orleans' last playoff clash with Minnesota was a thriller in its own right — the Vikings won on a last-second, 61-yard touchdown pass called the Minneapolis Miracle — that January 2018 game in Minnesota came in the divisional round of the NFC playoffs. There was no Super Bowl berth in the balance; the Vikings lost the following week in the NFC title game at Philadelphia.

The NFC championship 10 years ago had an epic feeling going in, Brees recalled, because of how strong the Saints and Vikings had looked all season. The Vikings were led by eventual Hall of Fame quarterback Brett Favre. Minnesota running back Adrian Peterson was in his prime, having rushed for 1,383 yards and 18 TDs to go with 436 yards receiving that year.

“From the beginning of the year, you saw the track that they were on,” Brees said of the Vikings. “They were pretty dominant. So you just got the feeling that these roads were going to converge at some point and it was probably going to be in the NFC championship game. At least, that’s what we all hoped, and sure enough it played out just the way we all thought.”

The pressure surrounding both clubs was immense, given the storylines. It was seen as possibly the last chance for Favre, who had turned 40 that season, to get back to a Super Bowl with a franchise that has never won one despite playing in four. The Saints were trying to get the Super Bowl for the first time and lift a city still rebuilding from widespread devastation caused by Hurricane Katrina four years earlier.

While the Saints often looked like a team on a transcendent mission, the Vikings came excruciatingly close to ending New Orleans' storybook run. Neither team led by more than seven points the entire game. The Vikings took two first-half leads, with the Saints tying it each time. There was even one dramatic series in which the Vikings recovered Reggie Bush's muffed punt deep in Saints territory, only to turn it right back over two plays later on a fumbled exchange between Favre and Peterson with the score tied shortly before halftime.

The Saints took two second-half leads, but the Vikings tied it each time.

The Vikings were tantalizingly close to getting the ball deep in Saints territory in the final five minutes of regulation when Ray Edwards sacked and stripped Brees. Saints guard Jahri Evans recovered and coach Sean Payton had to send out Morstead to punt soon after.

“We were backed up and really needing to have a good one, and I remember Sean yelling at me, ‘Give me some hang time,’" said Morstead, who booted the ball nearly 60 yards. "That was one of the best punts of my career.”

The Vikings began their last series on their own 21, but were nearly in field goal range when Favre, during a scramble to his right, threw back to the left and Saints cornerback Tracy Porter intercepted. That set up overtime, in which the Saints got the ball first and narrowly converted a fourth-and-1 at the Minnesota 43 on the way to setting up Garrett Hartley's winning 40-yard field goal. Under overtime rules at the time, a team could win on a field goal without the other team touching the ball.

Ear-splitting cheers filled the dome as Hartley's kick split the uprights, but the noise began dissipating as drained fans — many having watched the Saints mostly lose all their lives — began embracing, tears welling.

“It was an emotionally exhausting game because the stakes couldn’t be higher and there were so many big plays in the game back and forth," Morstead said. "I wasn’t as emotional from the city’s perspective because I didn’t understand it. I was a rookie. It was like, ‘How the hell did I wind up here? I’d won one game my junior year, one game my senior year.’ And it was just kind of crazy.”

Amid the locker room celebration, Morstead saw TV news footage of fans pouring out of bars onto Bourbon Street to celebrate the Saints' first trip to a Super Bowl, which New Orleans would win over Indianapolis in Miami two weeks later.

Morstead couldn't resist. He eventually made his way down to the French Quarter to witness the joy his team had brought to New Orleans.

"It was the greatest thing I’d ever seen,” he said.