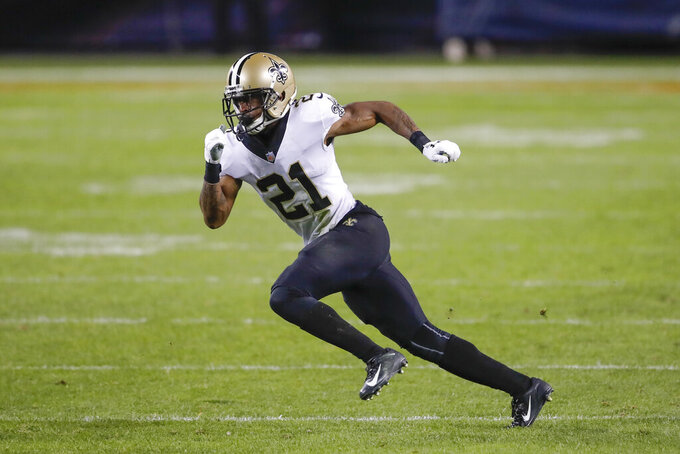 FILE - New Orleans Saints cornerback Patrick Robinson (21) is shown during an NFL football game against the Chicago Bears in Chicago, in this Sunday, Nov. 1, 2020, file photo. Saints veteran cornerback Patrick Robinson has decided to retire despite being a candidate for a starting role. Saints coach Sean Payton says he wasn't expecting Robinson's decision but says he understands when veteran players decide during training camp that they're ready to retire.(AP Photo/Kamil Krzaczynski)

METAIRIE, La. (AP) — Saints cornerback Patrick Robinson is retiring despite being a candidate for a starting job.

Robinson was a 2010 first-round draft choice by New Orleans and turns 34 in September. He left New Orleans in 2015 and won a Super Bowl with Philadelphia during the 2017 season before returning to the Saints in 2018.

He’d been getting first-team snaps, with the Saints trying to fill a vacancy created when they allowed Janoris Jenkins to become a free agent in a cost-cutting move.

“He's played in this league a long time,” Payton said. "He's had a great career. He's been smart with his money and it was something that deep down inside he felt. It's not unusual, really, in training camp. It's happened a number of times.

“He doesn't want anyone down and he just felt like in his heart it was time — and I respect that,” Payton added, noting that Robinson was healthy.

Robinson had been the oldest player on the roster, a title that now belongs to safety Malcolm Jenkins, 33.

Robinson played in 123 NFL games and made 16 interceptions in his career. As a Saint, he appeared in 84 games with 11 interceptions.

Payton had opened training camp by saying that cornerback was one of the positions the Saints “must” sort out before the regular season opens at home against Green Bay on Sept. 12.

All NFL teams are required to trim active rosters in the coming weeks from 90 to 53 for the regular season.

Ken Crawley received first-team snaps Robinson had been getting during Tuesday's practice. Crawley began his NFL career with New Orleans in 2016 as an undrafted free agent out of Colorado and started 13 games in 2017.

He played more of a reserve role in 2018 and left New Orleans in 2019, appearing in four games with Miami, before returning to the Saints.

“He's someone who's always been able to run. He's got real good length and so his radius to defend helps him,” Payton said.

“Obviously, he's been in this league now long enough. He understands some of the challenges: What are his strengths; what are his weaknesses,” Payton continued. "You keep working on some of those things that you want to get better at. But, he, too, is willing, and a good worker.”

While Marshon Lattimore remains New Orleans' top one-on-one defender on the outside, he could be suspended in the early part of the season because of an arrest on gun possession charges during the offseason.

Should that happen, the Saints will face the Packers with two new starters at cornerback and possibly some less experienced players in regular roles.

Among those working at cornerback is third-round draft choice Paulson Adebo, who on Tuesday intercepted a Jameis Winston pass tipped at the line by defensive end Marcus Davenport. He was taking second-team snaps along with recently acquired free agent Prince Amukamara, who was wearing Robinson's former No. 21 jersey.