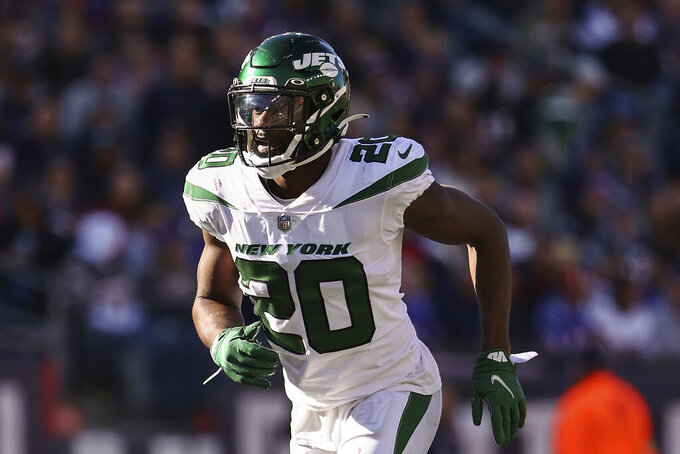 Maye, who turned 29 last week, has spent his first five NFL seasons with the Jets, who drafted him 39th overall out of Florida in 2017.

The 6-foot, 207-pound Maye has started all 60 games in which he has played and has six career interceptions, 3 1/2 sacks, four forced fumbles and one recovery. Maye had his best season in 2020, when he was voted the Jets' MVP by his teammates after he had a team-high 11 passes defensed and his 88 tackles ranked second on the club.

Last season, Maye played on the franchise tag after not being able to reach an agreement with the Jets on a contract extension. He appeared in just six games because of a torn right Achilles on Nov. 4. He's also facing potential league discipline after his DUI arrest in Florida in February 2021. The case is ongoing.

Maye will be expected to replace a player in Williams who demonstrated a knack for tracking down balls in the air — he had 15 interceptions in five seasons — but periodically struggled with his tackling to the point that Saints coaches were sometimes openly critical of it.

The Saints used their franchise tag on Williams last season, but this season chose to let him go while dealing with salary cap pressure that led New Orleans to restructure the contracts of numerous prominent players.

The Ravens lured Williams away from New Orleans with a five-year deal reportedly worth about $70 million.

The Saints remain in the market for a quarterback. They were among a handful of teams pursuing a trade disgruntled and legally entangled Houston Texans QB Deshaun Watson. General manager Mickey Loomis also has said the Saints were open to brining back free-agent QB Jameis Winston, who started seven games for New Orleans in 2021 before his season was cut short by a torn anterior cruciate ligament in his left knee.