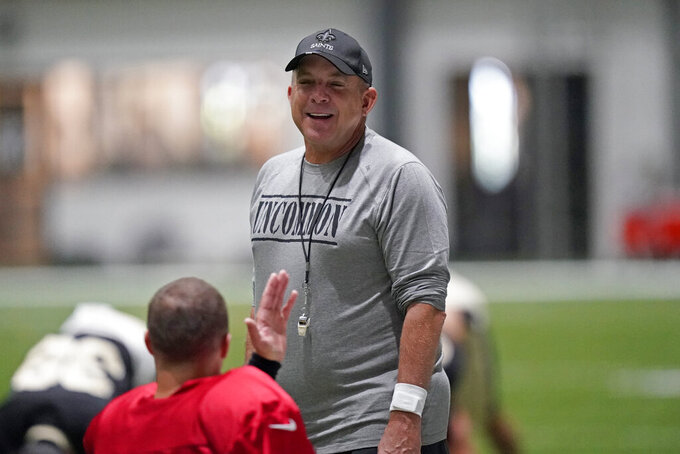 New Orleans Saints head coach Sean Payton talks to quarterback Drew Brees during practice at their NFL football training facility in Metairie, La., Monday, Aug. 24, 2020. The Saints also have had very little turnover on coach Payton’s staff. The coordinators and most position coaches remain the same. Having so many familiar faces remain in an organization coming off three straight NFC South titles should only help in a year when a global pandemic has wiped out traditional offseason programs and preseason games. “I do think the continuity can provide us that advantage,” Payton said.(AP Photo/Gerald Herbert, Pool)

NEW ORLEANS (AP) — Saints safety Malcolm Jenkins sees his new team as one that has underachieved in recent playoff campaigns.

New Orleans has won more regular season games – 37 – than any other NFL team since 2017. But New Orleans has not advanced to a Super Bowl during that span.

“I don’t understand how (the Saints) haven’t won a Super Bowl in the last three seasons; there is just that much talent on the roster,” said Jenkins, who was part of New Orleans’ only Super Bowl team as a rookie in 2009. “That’s the largest part is, how do we get over that hump?"

The Saints lured Jenkins back from Philadelphia, where he spent the past six seasons, with the promise of playing for a club with sights firmly set on making it to the Super Bowl.

And they haven’t been shy about saying so since training camp opened in late July.

“It has got to be Super Bowl or bust in all honesty. That’s it,” veteran left tackle Terron Armstead said. “If we don’t get to the big dance, it was a failure of a season.”

There’s no telling how much longer NFL all-time leading passer Drew Brees will be around. The 41-year-old QB, now entering his 15th season in New Orleans and 20th in the NFL, is under contract through 2021 — but has promised nothing beyond this season.

New Orleans is betting on younger talent to solidify its interior defensive line and hopes Jenkins, an 11-year veteran and established defensive leader, can help solidify the secondary.

There also has been little turnover on coach Sean Payton’s staff. The coordinators and most position coaches remain the same.

Having so many familiar faces in an organization coming off three straight NFC South titles should only help in a year when a global pandemic has wiped out traditional offseason programs and preseason games.

“I do think the continuity can provide us that advantage,” Payton said.

The Saints used their 2020 first-round draft choice on Michigan center Cesar Ruiz. The pick came one year after New Orleans had used its top overall 2019 pick on Texas A&M center Erik McCoy, who started as a rookie. Both players also can play guard, and have alternated weeks taking snaps at center and guard with the idea that both will start.

McCoy doesn’t sound bothered by the possibility of switching from center to guard in his second NFL season.

“Whatever is going to put us in the best position for this team to win, I’m cool with," McCoy said. "I don’t have a preference.”

The defensive backfield has undergone a mild shake-up.

Cornerback Janoris Jenkins, acquired in a trade with the New York Giants last season, has taken over for Eli Apple, the 2019 opening-week starter who is no longer with the club. Second-year pro C.J. Gardner-Johnson is in line to supplant P.J. Williams at nickel back in New Orleans’ five defensive back base alignment. Jenkins joins Marcus Williams at safety. Marshon Lattimore, the 2017 Defensive Rookie of the Year, remains the top cornerback.

A better pass rush could have helped New Orleans avoid an overtime loss in the divisional round of the playoffs last season. But two former first-round picks, defensive tackle Sheldon Rankins and defensive end Marcus Davenport, were out with injuries. Both are back working with the first team in camp, alongside sacks leader Cameron Jordan and either Malcom Brown or David Onyemata at the other tackle spot.

Jordan says the 6-foot-6 Davenport, who is now playing at about 10 pounds more than his previously listed weight of 265, is a “freakish talent that you rarely see.”

“We could be a special duo,” Jordan added.

All-Pro receiver Michael Thomas, who caught an NFL season-record 149 passes, represents merely the beginning of Brees’ options when distributing the ball. New to the club is receiver Emmanuel Sanders, a productive part of the 49ers’ Super Bowl team last season. Third-year receiver Tre’Quan Smith is looking to be a more consistent big-play threat, and Payton has expressed burgeoning confidence in second-year pro Deonte Harris, who was an All-Pro return man as a rookie.

The backfield also should be bolstered by the return to health of running and receiving threat Alvin Kamara, who played through a knee injury most of last season, and the addition of versatile running back Ty Montgomery. Also back is Latavius Murray, who eclipsed 100 yards rushing in both games Kamara missed last season.

“We have a lot of weapons, and the more weapons we add, the more exciting it gets,” Thomas said. “That’s just simple math.”