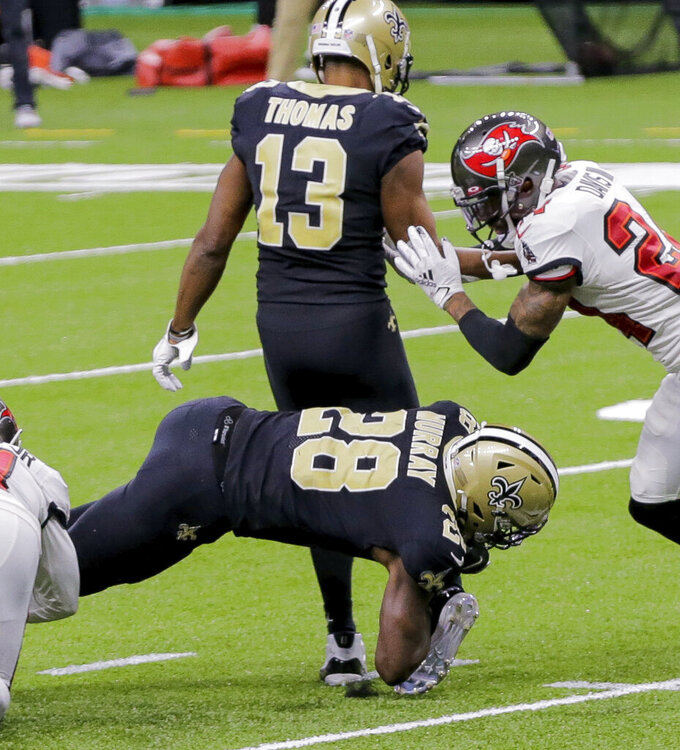 Thomas limped off the field late in Sunday's victory over Tampa Bay, and the team said Thursday he had an ankle injury.

Coach Sean Payton declined to address Thomas' prognosis with reporters, maintaining his usual policy of declining to disseminate any details beyond what clubs are required to post on injury reports.

Payton's refusal to discuss the matter left uncertain Thomas' prospects for Monday night's game against the Raiders in Las Vegas — or games beyond that.

Sanders, who left San Francisco as a free agent this past offseason, caught a 5-yard touchdown pass from Drew Brees in his Saints debut. The Saints said Sanders' absence from practice Thursday was not injury-related, but no further explanation was provided.

Sanders was not added to the Saints' reserve/COVID-19 list, according to transactions released Thursday by the NFL.

Thomas' and Sanders' absences come after Brees last Sunday passed for 160 yards, well below his usual standard and tying a season low from last year — excluding a Week 2 loss against the Rams in Los Angeles, which Brees left with an injured throwing hand after his fifth pass.

The Saints (1-0) also got relatively low production from Thomas, who opened 2020 with three catches after setting an NFL single-season record with 149 catches in 2019.

Brees has had games before in which he's thrown multiple touchdown passes to reserves. Among them was a Thursday night victory over Atlanta in November 2018, when Brees threw scoring passes to four players who had entered the NFL as undrafted free agents within three years of that game: tight end Dan Arnold and receivers Tommylee Lewis, Austin Carr and Keith Kirkwood.

“Our coaching staff does a great job of putting guys in the best position to succeed and building a game plan around the strengths of the guys we do have," Brees said after Thursday's practice.

Brees also makes plenty of throws to running backs such as Alvin Kamara, who had a receiving touchdown in Week 1, and tight ends including Jared Cook, who caught five passes for a team-high 80 yards last Sunday.

“I'm not worried about Drew's passing yards," Kamara said. “We just had a slow offensive day, just kind of working some of the kinks out. It was Game 1, so those are when some of those mistakes happen.”

Kamara added that the newer and younger offensive skill players who could be called upon this week are "locked in. They know what's going on. They know what they have to do. We're focused on a lot of details this week and they'll be ready.”

Last week, New Orleans had two other receivers on the active roster: Deonte Harris and Marquez Callaway. Harris was an All-Pro returner as a rookie last season and his play in training camp, along with comments by Payton, have foreshadowed a growing role in the offense for him this season.

“He could have had more touches and more involvement (in the offense) a year ago,” Payton said last week.

Callaway is an undrafted rookie out of Tennessee.

The club could choose to activate any of several receivers from its practice squad, including Bennie Fowler, Austin Carr, Juwan Johnson and Lil'Jordan Humphrey.

Folwer was activated in Week 1 and recovered a kickoff fumbled by Tampa Bay.

NOTES: The Saints activated running back Dwayne Washington from their reserve/COVID-19 list. The Saints now have no other players on that list.