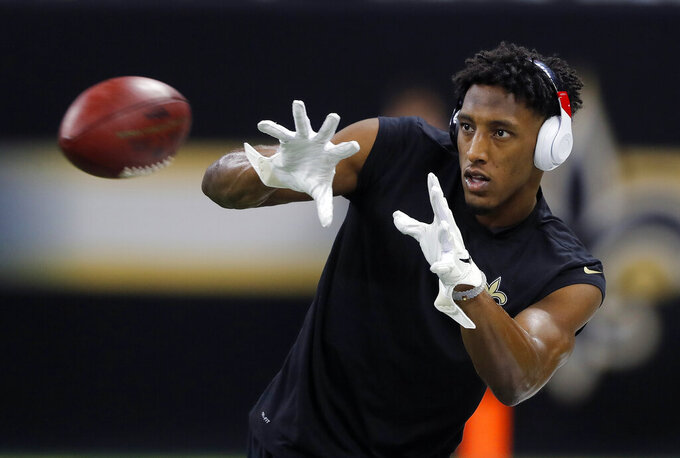 FILE - In this Sunday, Jan. 20, 2019 file photo, New Orleans Saints' Michael Thomas warms up before the NFL football NFC championship game against the Los Angeles Rams in New Orleans. Fans worry that the summer rite in the NFL, training camp holdouts, won’t affect their team’s chances for a championship. This year’s crop of no-shows includes an All-Pro receiver, the Saints’ Michael Thomas; a standout offensive tackle who might be the key to the Redskins’ offense, Trent Williams; and budding stars DEs Jadeveon Clowney of the Texans, Yannick Ngakoue of the Jaguars, and RB Melvin Gordon of the Chargers.(AP Photo/Gerald Herbert, File)

METAIRIE, La. (AP) — Saints receiver Michael Thomas' contract holdout, which began when he failed to report to team headquarters on Thursday, continued through the first practice of training camp Friday.

How long Thomas' absence might extend remains to be seen as negotiations that general manager Mickey Loomis has described as "daily" continue. But teammates hardly seemed bothered by Thomas' choice or the prospects of having to practice without him.

"Right now he's got to do what's best for himself, his family and his career. Anything that happens between him and the team, Mike has did what he needed to do to put himself in position" to receive a big contract," left tackle Terron Armstead said. "So I support him and I know when he gets back he's going to be ready to roll. I want to see people succeed. I want to see people get everything they're worth.

"He earned it — day after day, high intensity — he's earned everything that his heart desires," Armstead added. "I would never downplay or speak ill on anyone."

Thomas has established himself as an elite receiver with 321 catches for 3,787 yards and 23 touchdowns in his first three NFL seasons. Currently, Cleveland's Odell Beckham Jr. has the highest annual salary of any NFL receiver at around $18 million, so Thomas' deal is expected to be in that range. The 2016 second-round pick out of Ohio State is in the final season of his rookie deal, which would pay him a little more than $1.1 million.

Drew Brees has twice opened training camp as a full participant while in the final season of a contract, but had no criticism of Thomas' tactics.

Brees said he worked out with Thomas this summer, and their chemistry has never been in question. If anything, Brees said, Thomas' absence — at least in the short term — could help the Saints take a closer look at a number of young receivers trying to carve out more prominent roles, from second-year pros Tre'Quan Smith and Keith Kirkwood to veteran Cameron Meredith, who missed most of his first season in New Orleans because of the lingering effects of a knee injury that had wiped out his previous season with Chicago.

"I'm excited to see these guys work and compete and get a little bit better each day. They are young and enthusiastic," Brees said. "That's the fun part for me, and probably the big challenge for me, coming into camp, is seeing how all that's going to come together and who's going to fill those roles."