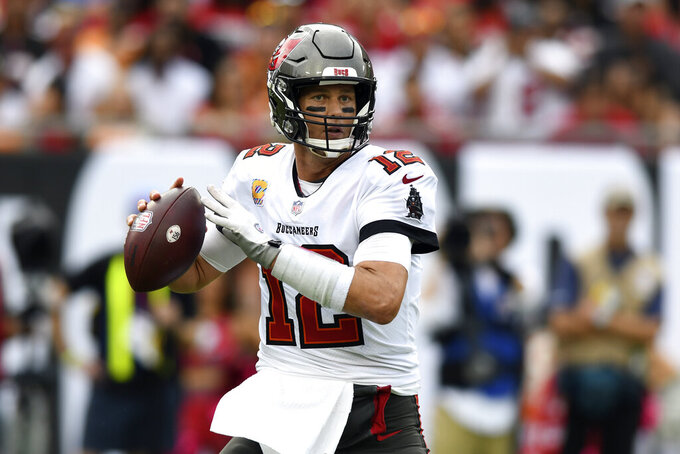 Sunday in the Superdome, Winston gets his first start against the Buccaneers (6-1), the franchise that drafted Winston first overall in 2015 and made him the face of their franchise before unceremoniously cutting ties in 2020 so they could replace him with Tom Brady.

Winston, who then watched Brady lead his old team to a Super Bowl triumph last season, won't deny the personal significance of this matchup. But he's trying to manage his emotions and just be the quarterback New Orleans (4-2) needs him to be against a worthy foe.

“I’ve always been an emotional football player. I think that’s something that I’m trying to work on – being present instead of being stuck in my feelings,” Winston said. "As a quarterback, we have to be present all the time and aware of everything that’s going on.

“Sometimes too much emotion can lead us places that we don’t want to go,” Winston continued. “Obviously, I want to beat them; I want to beat them bad. And in my heart, I’m ready to rock. But at the end of the day, they’re another opponent — another opponent that we've got to beat that’s in this division. And they’ve got a good team; they’re coming in here hot. So we’ve got to stand our ground and represent at our house.”

The encounter also will be meaningful for Buccaneers defenders who just a couple years ago were Winston's teammates, such as edge rusher Jason Pierre-Paul, whose first two years in Tampa Bay overlapped with Winston's stint there.

“I can’t wait,” Pierre-Paul said, adding that he'd text Winston and “tell him to get ready.”

“It’s going to be fun. He’s like a brother to me,” Pierre Paul added, mentioning an offseason hiking trip they took together in Colorado. "But I can’t wait to hunt him down. It’s crazy, Jameis is a different type of breed.”

And there's no lack of respect among the Bucs' secondary for what Winston can do.

“He makes a lot of plays. He has a great arm and throws it deep,” Bucs safety Jordan Whitehead said. "He’s playing (well), making the right decisions, making smart reads, running the ball. It’s going to be a good test and I’m excited to get back and play against him.”

Saints coach Sean Payton mentioned a scene from the 1982 film “Fast Times At Ridgemont High,” when explaining why he figured Winston would take a deliberate, level-headed approach to Sunday's matchup.

“It’s not like he’s playing defensive end and they smashed his car," Payton said, recalling how the enraged defender (played by Forest Whitaker), mistakenly believing students from a rival school had damaged his Camaro, menacingly takes over a game against that school shortly after.

Winston is “playing quarterback," Payton stressed. "So, he's got to be precise. He's got to be on point and I think he understands that."

Tampa Bay leads the NFL in passing, with Brady throwing for 2,275 yards and a league-high 21 touchdowns through seven games. The Bucs are third in scoring at 33.3 points per game.

The Saints, meanwhile, rank eighth in total defense (331.5 yards) and third in scoring defense at 16.3 points per game.

Bucs coach Bruce Arians said New Orleans has the strongest defense the Bucs have faced so far this season.

“The front seven — (linebacker) Demario Davis is one of the best there is, the same with (defensive end) Cam Jordan,” Arians said, adding it’s a “big, physical defense with a great secondary.”

The Bucs (6-1) have won 14 of 15 games dating to last year and are off to the best start in franchise history this season.

“Our guys are working as hard or more," Arians said. "There’s a better attention to detail because I think now they know what’s at stake.

“Games in September and October mean something when it gets to December and January,” the coach added. “You start talking about home-field advantage, and all the things that we learned about last year for the first time. It’s going to be different this year.”

The Saints have reunited the “Boom and Zoom” running back tandem they had in 2017 and '18 by trading with Houston for Mark Ingram.

Ingram, a physical runner and 2009 Heisman Trophy winner with Alabama, was a Saints first-round draft choice in 2011 and had his best career season in 2018 while paired with the dynamic and elusive Alvin Kamara — the “zoom” to Ingram's “boom.”

“I'm looking forward to seeing my guy back,” said Jordan, who also was part of the same rookie class with Ingram in New Orleans. “Everybody knows how infectious Mark's energy is, how great of a teammate he is.”

The Saints' defensive line finally will welcome back top tackle David Onyemata, who is coming off a six-game suspension for violating the NFL's performance-enhancing drug policy.

Payton said Onyemata stayed “in great shape” during his suspension.

“He’s one of our top defensive tackles. He’s athletic, he’s strong, he has heavy hands," Payton said. "You’re getting one of the starters back. ... He’s a real important piece to what we do.”