Saints' Winston showing why he won over Payton, teammates 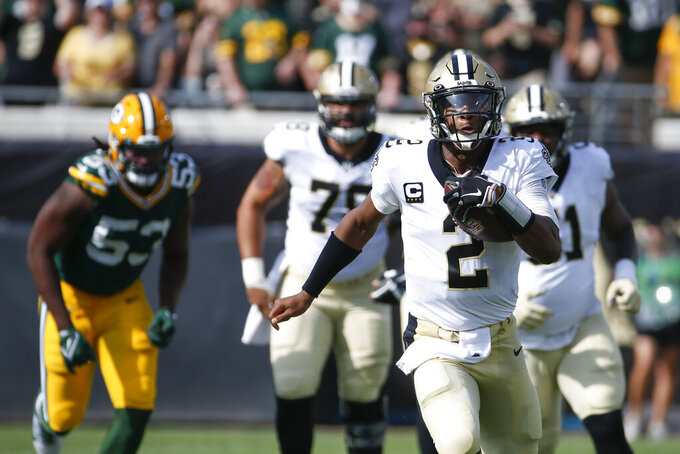 With one game in the books as the Saints' successor to all-time leading NFL passer Drew Brees at quarterback, Jameis Winston has five touchdowns and no interceptions.

And the Saints (1-0) have bolted out of the gate with a lopsided 38-3 victory over a projected Super Bowl contender in Green Bay.

It could be an auspicious start to a new chapter in the career of the 2013 Heisman Trophy winner and 2015 first overall draft choice by Tampa Bay. But Winston doesn't want to get ahead of himself.

“I’ll probably reflect when the season’s all over. But right now, man, we’re in a race to get better,” Winston said, echoing one of coach Sean Payton's mantras. "There’s some things on film that I’m not going to like.”

Winston's talent has never been in doubt. His decision-making and maturity were a little more suspect during his first five NFL seasons, when he started for Tampa Bay with sometimes wildly vacillating results.

But since coming to New Orleans, he's been a picture of humility and determination, and some key teammates, such as defensive captain Demario Davis, have noticed.

“I don’t think there’s a player in the building I’m more proud of,” Davis said of Winston. “There’s nobody I’m more excited to watch just because of the belief I have in him ... and just seeing his evolution as a player and as a man, I think the world is really going to be shocked by what they see.”

Green Bay's offense and star QB Aaron Rodgers certainly looked shocked by what they saw from a New Orleans defense that entered the season with questions after the departure of their 2020 sack leader and starters on the interior of the line and at cornerback.

Rodgers was intercepted twice, was sacked twice and was on the bench for most of the fourth quarter.

“We just knew coming into this game, eliminate the explosives, keep everything in front of us and we’ll take care of everything else,” said safety Marcus Williams, who had an interception that set up a TD.

“We came out here and we dominated like we were supposed to — like we know we should.”

The entire offense, particularly up front. Even after starting center Erik McCoy left with an injury in the first quarter, the Saints offensive line opened lanes for rushers and protected Winston. New Orleans' offense had balance, gaining 171 yards on the ground and 151 yards through the air while possessing the ball for 34:36.

All five of the Saints TDs technically came on passing plays, although the first, by Kamara, came on a short forward pitch as the running back crossed behind the line of scrimmage.

The pass rush was solid, getting two sacks, but might need help if defensive end Marcus Davenport, who had a sack of Aaron Rodgers, is forced onto injured reserve with a chest injury that was still being evaluated on Monday.

Last year, Johnson was mostly a practice squad receiver who saw action in seven games and made four catches for 39 yards and no touchdowns. Having committed to a position change this offseason, he had a major effect on his first game at his new spot. He converted a fourth-and-7 on a screen and had the first two TD catches of his career.

Adebo is a third-round draft choice out of Stanford who opted out of the 2020 season. But the adjustment to the NFL hasn't looked too difficult for him. He made his first career interception against the reigning NFL MVP in his first game.

The turnover also came inside the Saints 10 as the Packers threatened to trim what was then just a two-TD deficit early in the third quarter.

Reserve QB Taysom Hill, although some of that had more to do with how stellar Winston played. Hill entered training camp in an open competition with Winston for the starting job.

Returning to his previous role as a backup as well as a change-of-pace, read-option threat, he did not have a highly productive game. He rushed for 1 yard on two carries and completed one pass for 3 yards.

McCoy has a lower leg injury and it was unclear Monday when he or Davenport would be able to return. Cornerback Marshon Lattimore played through a thumb injury, but could be sidelined in Week 2.

70 — The combined victory margin of the Saints' past two games played in Florida. They also won 38-3 at Tampa Bay last Nov. 8.

The hurricane-displaced Saints returned to temporary headquarters in the Dallas area to begin Week 2 preparations for their next game at Carolina. This week they'll work new cornerback Bradly Roby into the lineup as he comes off a suspension, which began last season, for violating the NFL's policy on performance-enhancers. Roby's availability would be especially timely if Lattimore is unable to play Sunday.