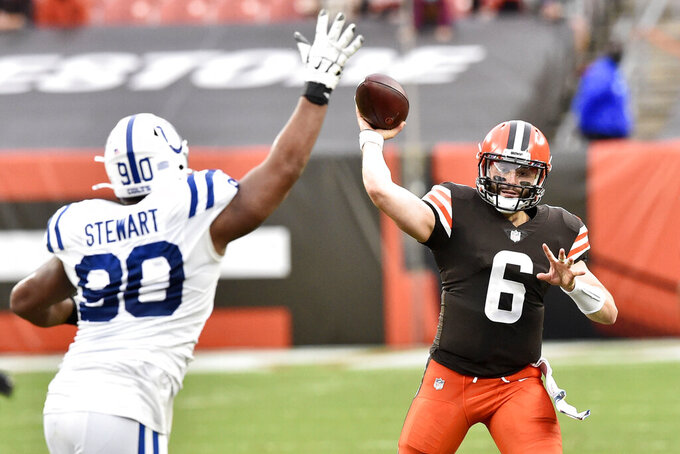 Cleveland Browns quarterback Baker Mayfield (6) throws during the first half of an NFL football game against the Indianapolis Colts, Sunday, Oct. 11, 2020, in Cleveland. (AP Photo/David Richard)

PITTSBURGH (AP) — The trappings of a rivalry between the Pittsburgh Steelers and Cleveland Browns have lingered even as the results have grown remarkably one-sided.

Bad blood. Trash talk. Emotionally charged games. The only thing the long-running series has lacked for the better part of a quarter century returns Sunday when the unbeaten Steelers (4-0) host the surging Browns (4-1).

Pittsburgh is off to its best start in 41 years, but has gotten there by beating teams with a combined record of 3-15-1. The Browns haven't been this good a month into the season since Bill Belichick was roaming the sidelines in something other than a hoodie with the sleeves cut off.

Yes, this is different. So different that Cleveland defensive end Myles Garrett's first visit to Pittsburgh since he ripped off Steelers quarterback Mason Rudolph's helmet and swung it at him last November is not a major part of the narrative but simply outside “noise” both sides intend to tune out.

The same goes in Cleveland. There's simply too much on the line.

A year ago, the preseason hype train surrounding the Browns disintegrated as Cleveland devolved into a hot mess that cost then head coach Freddie Kitchens his job. Kevin Stefanski's arrival has brought a sense of stability and professionalism not to mention a punishing running game and an approach that relies more on accountability than swagger. The constant drama the Browns couldn't seem to escape in 2019 — drama that reached its peak with Garrett's now infamous helmet swing — is gone. Mostly.

“Myles is a great player, a great person and a great teammate," Browns running back Kareem Hunt said. "You just learn a lot going through situations like that. You just have to come ready, forget about all that stuff and do whatever you can. This one is for Myles. This one is for Cleveland Browns fans. This one is for a lot of things.”

Respect being perhaps at the top of the list for a franchise that hasn't reached the postseason in 18 years or won in Pittsburgh in 17.

“Once again, we are not worried about the past,” Cleveland quarterback Baker Mayfield said. “We are worried about right now. The next game is the most important one, and we have a very good division opponent we are going up against in their house.”

A house where the Steelers have treated Cleveland the way Lucy treats Charlie Brown, forever dangling the football in front of them before pulling it away at the last second. Steelers quarterback Ben Roethlisberger has never lost to the Browns at Heinz Field and is off to a red-hot start in his return from right-elbow surgery that cost him most of 2019. Roethlisberger, an Ohio native, is 23-2-1 all-time against the team that bypassed him in the 2004 draft. Still, he's wary while facing Garrett, whose six sacks lead the NFL.

Mayfield was limited in practice this week while nursing tender ribs. For Cleveland to pull off the upset, the offensive line will need to keep Mayfield out of harm’s way and do it while facing the team that's tied for the league lead in sacks with 20.

The group in front of Mayfield has been pretty steady so far. Mayfield, who has been effective on roll-out throws, has only been sacked seven times and the 22 pressures allowed are a league-low.

“I believe in our guys, first and foremost, no matter who we are facing,” he said. “Obviously, the challenge with the Steelers defense is that we are going to have ups and downs throughout the game. It is not going to be perfect, and we know that. That is what comes with these challenging games and when you play great teams.”

CHASE ON THE CASE

Pittsburgh rookie wide receiver Chase Claypool is coming off a record-setting performance against Philadelphia in which he became the first Steelers player to score four times in a game since 1968. Claypool's rapid development gives Roethlisberger another target in an offense that has scored at least 26 points in its first four games for the first time in franchise history. It also means, however, that the 6-foot-4, 238-pound Canadian can no longer fly under the radar of opponents.

"The thing I told him after the game is he isn’t going to be able to sneak up on anybody,” Roethlisberger said. “So how is he going to rise to the occasion now that people are going to be watching him?”

They were both on the Vikings staff in 2006, Tomlin as the team’s defensive coordinator and Stefanski as an assistant to then-coach Brad Childress.

Stefanski has remained friends with Tomlin and admires the consistency of his teams in Pittsburgh.

“They are always prepared,” Stefanski said. “He does everything. They win football games any which way they need to. He is a very outstanding coach.”