Sanders makes another big leap in his comeback 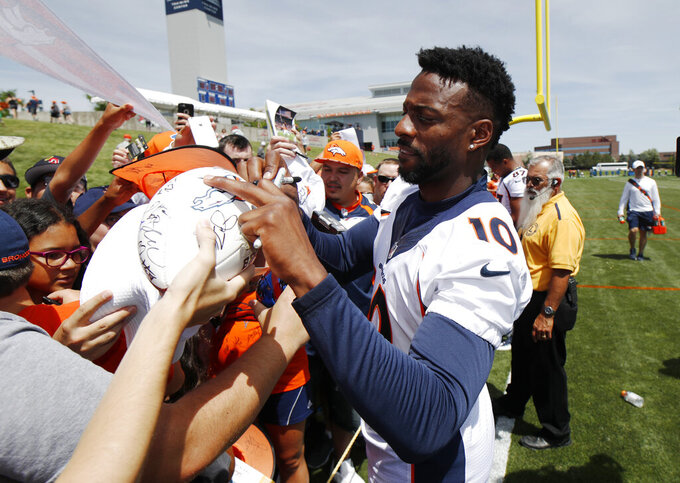 The 32-year-old wide receiver made a diving grab for his first catch in his first 7-on-7 drill of Denver's training camp Wednesday.

Nifty but maybe not necessary.

Sanders tore his left Achilles tendon in practice Dec. 5, cutting short a season in which he led the team with 71 catches for 868 yards and four touchdowns. He underwent surgery the next day and immediately declared he'd be back in six months.

Courtland Sutton, the second-year pro who's been the No. 1 receiver since Sanders was sidelined, loved seeing his fellow SMU alum make the kind of play that's been his trademark.

"It was amazing to be able to see him out there getting some 7-on-7 reps. It was so cool to be able to see him moving around against the defense and everything," Sutton said. "The guy has been working his butt off, man. ... You all saw it because he put it on his Instagram, pretty much every day, of how hard he was in there working, doing rehab, doing the runs, everything.

"To see him go full-speed for the first couple of times it was awesome. There is a lot more coming from him. I hope you all know that we are going to get the Emmanuel Sanders back that everybody knows."

That would be a big boost to the Broncos' revamped offense led by new coordinator Rich Scangarello and new quarterback Joe Flacco.

Without Sanders, the Broncos have been relying on a young receiving corps and an equally young tight end group, both of which have been hit by injuries since training camp began a week ago.

Tight end Jake Butt, coming back from a third ACL tear, missed his third consecutive practice Wednesday, and coach Vic Fangio said, "he's hit a little pothole here in his road to recovery, but I don't think it's anything too, too serious at this point."

So, Sanders' workout was a godsend.

Sanders said he doesn't have a timetable for graduating to team drills or 1-on-1 sessions against defensive backs: "There's really no rush," he said, noting his goal is to be ready for the opener Sept. 9 at Oakland.

"I do want to get back out there," Sanders said. "I do want to go 1-on-1s and talk smack to Chris Harris Jr. and be myself. But at the same time, it's a process and I have to respect that process."

With Sanders sidelined and a bevy of targets digesting the complicated West Coast offense 2.0, the first week of Broncos camp has been marked by numerous dropped passes.

"I'm trying to take it easy on the young guys," Sanders said. "Obviously, you see them over there, they're on a Jugs machine right now. It's the youngest group that I've been around. Nobody is over 25. I'm 32. We've got a very young group. We're just trying to get these guys right.

"It's a lot of these guys' first training camp or second or third training camp. They're trying to make the roster. I know sitting on the sideline it looks easy. You think, 'Oh, my grandma could have made that catch.' But it's a lot harder than you think."