Saquon Barkley wants to start having fun playing for Giants 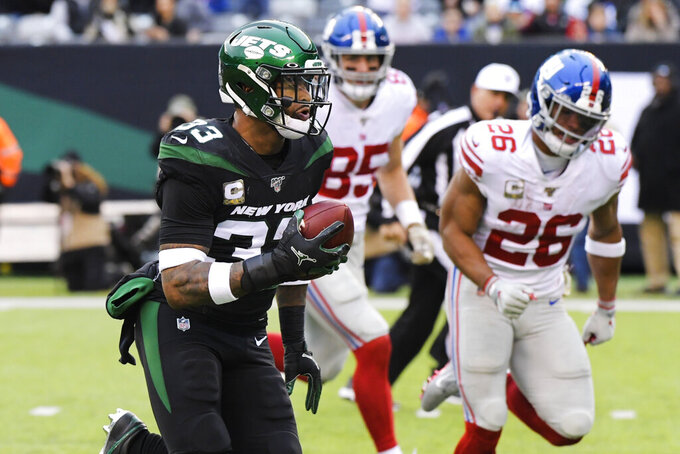 Since returning from a high ankle sprain to his right ankle more than a month ago, the 2018 NFL Offensive Rookie of the Year hasn’t had a great time playing the game he loves, at least statistically.

In four games against Arizona, Detroit, Dallas and the Jets, Barkley has carried 64 times for 165 yards, an average of 2.57 yards. The worst was the last one against the Jets: He gained 1 yard on 13 carries, a career low if you haven’t guessed.

So over the bye week for the Giants (2-8), Barkley decided to sit back and watch some videotapes of his play. He saw his mistakes running, blocking and catching passes out of the backfield. The former Penn State product also saw plays where he was making the same cut as a year ago and making plays, even after the injury.

In other words, don’t say he still is hurt.

The remarkable thing Barkley saw was that he at times was not being himself. He didn’t blame anyone for that, although for a split second he wondered aloud whether “you guys” — reporters — were the cause. He just as quickly said he allowed it and it was his fault.

Despite missing 3½ games, Barkley is 29th in the league in rushing with 402 yards on 101 carries, with a 4.0 average and two touchdowns.

Barkley said he has already watched his game against the Jets and filed it. It won’t influence him against the Bears.

He also drew a couple of smiles when he said that he did some research during the bye to see if another back had ever had a game where he was held to 1 yard on 13 carries. He found one, although his facts weren’t quite right when he said Hall of Famer Barry Sanders of the Lions was held to zero yards on 16 carries in a playoff loss to the Green Bay Packers in 1995. The Pack actually held Sanders to minus-1 yard rushing on 13 carries in a 16-12 first-round game in Green Bay.

“I don’t think that stopped him from having a great career,” Barkley said of Sanders. “If anything, I would think it pushed him and motivated him to be better. So, is it motivating me to be better for this next game? No, but there’s going to be times when you’re in a funk. There’s going to be times when things aren’t going your way. Obviously, I would love to make it go my way, I would love to have 13 carries and 300 yards, trust me. But I’m not going to get down on myself.

NOTES: The Giants are probably going to be without TEs Evan Engram (foot) and Rhett Ellison (concussion) against Chicago. ...LT Nate Solder (concussion), CB Janoris Jenkins (concussion), C Jon Halapio (hamstring) and RT Mike Remmers (back) are all expected to return. There is a chance WR Sterling Shepard (second concussion) might play after missing the last five. ... Defensive coordinator James Bettcher refused to talk about any change coming out of the bye, saying it would reveal itself in the game.