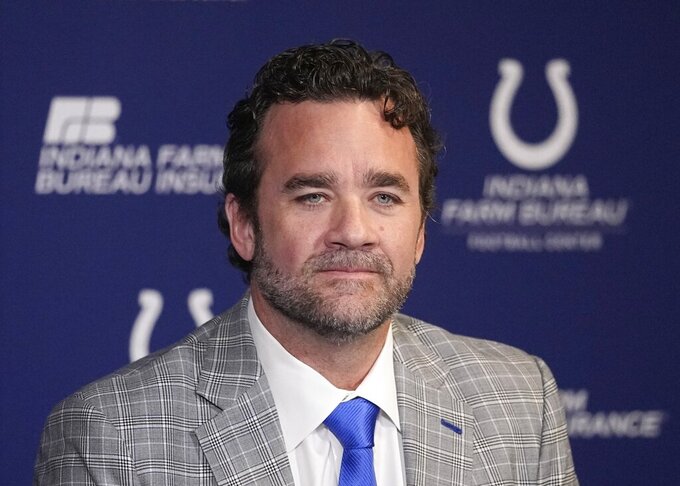 First, he must select a play-caller. Then he must map out a game plan, figure out what's wrong with the offense, try to fix a struggling offensive line and beat Las Vegas on the road.

It's a lot to ask of someone who spent more time in the broadcast studio than on the sideline recently, but Colts owner Jim Irsay believes Saturday can win on Sundays.

“I feel fully capable, I’m excited about the opportunity — eight games,” Saturday said at his introductory news conference. “Here’s the great part about my career, I came in and nobody expected anything. I’m here and no one expects anything. If it goes well, hopefully it will go extremely well, but I have no preconceived notion I’m going to be some spectacular anything.”

Fortunately, for the Colts, he's not completely unfamiliar with this team.

In fact, he was swinging the anvil at Lucas Oil Stadium on Oct. 30, wearing Tarik Glenn's No. 78 jersey as the longtime left tackle joined Saturday in the team's Ring of Honor.

Now, though, it's a mad scramble following the unusual move to hire someone, even on an interim basis, with no coaching experience at the pro or college level. Saturday's lone coaching gig was a four-year tenure as head coach of a Georgia high school, a job that ended in 2020.

The fact Indy (3-5-1) remains in the playoff hunt and doesn't have a bye for another month only complicates matters.

“He’s the best man for the job, there’s no question about it in my mind,” Irsay said, explaining why he made his first midseason firing in the quarter-century he's been the team owner. “There’s no other mystery behind it. First, he’s extremely tough and he’s a leader. When you’re looking for head coaches, leadership’s the No. 1 thing."

Irsay didn't need an interview, either, because he knows Saturday and his story so well.

He was cut as an undrafted rookie by the Baltimore Ravens in 1998 then spent the next year working in a North Carolina electrical supply store, hoping an NFL team would give him another chance.

Indy signed him in 1999 and under the guidance of late offensive line coach Howard Mudd, Saturday blossomed into Peyton Manning's trusted center.

He was a two-time All-Pro, made six Pro Bowls, won a Super Bowl and became almost inseparable from the Hall of Fame quarterback despite an occasional sideline spat. And he, along with Colts assistant offensive line coach Kevin Mawae, teamed up to help the NFLPA and owners reach a settlement to end the 2011 NFL lockout.

“Jeff’s made of the right stuff, he was the ultimate teammate,” Manning said on ESPN. “He’s a high-character guy. He’s a great leader. He’s going to have to rely on these players to kind of get him comfortable and try and get a win there in Indianapolis. A win there could solve a lot of things.”

But winning has become incredibly complex in Indy.

Two weeks ago, the now-fired coach Frank Reich benched longtime veteran Matt Ryan in favor of second-year quarterback Sam Ehlinger. Last week, Reich fired offensive coordinator Marcus Brady even though Reich called the plays since his hiring in 2018. Reich also had been mixing and matching offensive line groupings trying to find something, anything that would work.

The result: Indy is scoring a league-low 14.7 points, shares the league lead with 17 giveaways and has allowed a league-high 35 sacks.

Saturday knows that can't continue if the Colts intend to win.

So he wasted no time clearing up two questions Monday night — Ehlinger will continue to be the starter at QB and rookie Bernhard Raimann will be Indy's starting left tackle.

Everything else could change except Saturday's mission.

“I’ve seen great leadership and I’ve learned a lot," Saturday said. "I’m a leader of men, I don’t shy away from it and I'm excited about it. That’s my passion and I love it. Football just so happens to fit that mold. But that’s what I love. When I can do the two things I love, I can lead a group of men and coach football, I’m not going to say no to that.”