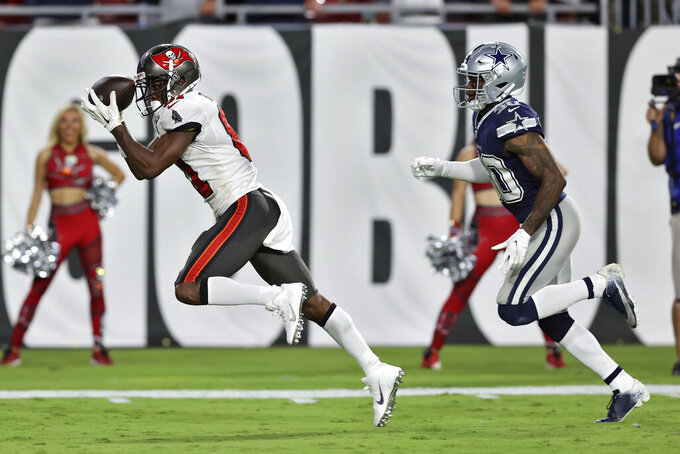 OPENING LINE: Buccaneers by 11½, according to FanDuel SportsBook

AGAINST THE SPREAD: Falcons 0-1, Buccaneers 0-1

TURNOVER DIFFERENTIAL: Falcons even; Buccaneers minus-3

FALCONS PLAYER TO WATCH: QB Matt Ryan completed 21 of 35 passes for 164 yards, no touchdowns and no interceptions in a lopsided loss to Philadelphia last week, when Atlanta was limited a pair of field goals and 260 yards total offense. Ryan is 0-5 lifetime in starts against Tom Brady-led teams, including a loss to New England in Super Bowl 51.

BUCCANEERS PLAYER TO WATCH: Mike Evans is the only player in NFL history to begin a career with seven consecutive seasons with at least 1,000 yards receiving. The eighth-year pro is off to quiet start with just three receptions for 24 yards in last week’s opener, however Evans has had some big-time performances against the Falcons. In six career home games vs. Atlanta, he’s averaged 94.5 yards per outing and scored seven touchdowns. Overall, he has 69 receptions and eight TDs in 13 meetings between the NFC South rivals.

KEY MATCHUP: Ryan vs. a young secondary that played much of Tampa Bay’s opener without two starters. To have a chance to keep pace with Brady and Tampa Bay’s potent offense, the Falcons will need a big day from Ryan. In his past six starts against the Bucs, the Atlanta quarterback has thrown for 1,938 yards and 12 TDs vs. two interceptions.

KEY INJURIES: Bucs S Jordan Whitehead is expected to play after sitting out last week with a sore hamstring. CB Sean Murphy-Bunting dislocated an elbow against the Cowboys and figures to be sidelined at least a month, maybe for the season. ... The Falcons emerged from their opener in good shape physically. No players were listed on the injury list when they began preparation for the Bucs on Wednesday.

SERIES NOTES: The Bucs have won three of the past four games between the division rivals, including a sweep of the series in 2020. Brady overcame a 17-0 halftime deficit on the way to a 31-27 win at Atlanta in December and threw for 789 yards and six TDs vs. one interception in the two games against the Falcons last season.

STATS AND STUFF: Brady made his 300th career regular season start — a league record for quarterbacks — and led a last-minute field-goal drive to lift the defending Super Bowl champions over Dallas 31-29 in Tampa Bay’s opener. The Falcons, meanwhile, were trounced by the Eagles in their debut under coach Arthur Smith. Atlanta rushed for 124 yards in the 32-6 loss, which could be difficult to repeat this week vs. a defense that was stingiest in the NFL against the run each of the past two seasons. ... The Bucs have won nine consecutive games going back to a 26-14 victory over Minnesota in Week 14 last season. They’ve scored at least 30 in eight straight, a stretch that began at Atlanta on Dec. 20. The streak of 30-plus outings includes two wins over the Falcons, as well as four postseason victories. It also matches the longest in NFL history. Brady-led offenses with the Patriots also scored at least 30 in eight consecutive games during the 2007 and 2010 seasons. ... Brady is 8-0 all-time vs Atlanta, the best won-loss record against the Falcons by any player in NFL history. The 44-year-old quarterback has thrown for 2,697 yards, 19 TDs and three interceptions in the eight games, including New England’s 34-28 come-from-behind win over the Falcons in the Super Bowl in February 2017.

FANTASY TIP: Bucs WR Chris Godwin, who had a team-high nine catches for 105 yards and one TD against Dallas, has eight TD receptions in seven games against the Falcons.