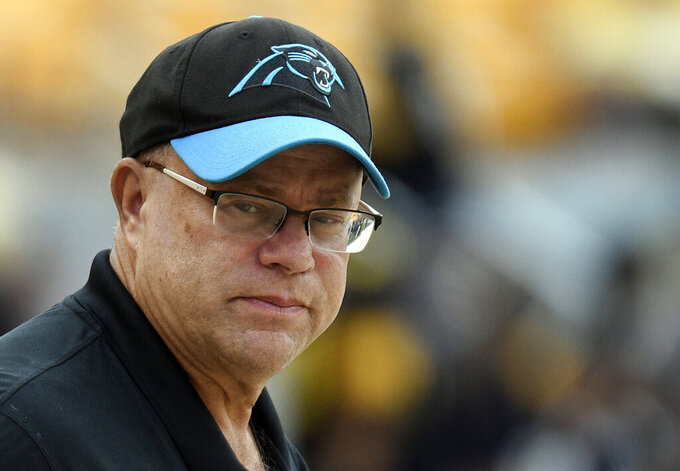 FILE - In this Aug. 30, 2018, file photo, Carolina Panthers owner David Tepper walks in the field during before an NFL football game against the Pittsburgh Steelers in Pittsburgh. A South Carolina senator said Wednesday, April 10, 2019, he will continue his objection to a bill providing $120 million in tax breaks and incentives to move the Panthers practice facility to South Carolina until he gets answers to competing economic analysis reports. (AP Photo/Don Wright, File)

Democratic state Sen. Dick Harpootlian of Columbia retained his own economist to analyze the state's examination of the value of the move.

South Carolina could only expect about $1.1 billion from the move over 15 years, according to the senator's report, well below the $3.8 billion impact the state Commerce Department estimated, according to a letter Harpootlian wrote to Gov. Henry McMaster. The governor is an enthusiastic supporter of the proposed move.

The state's analysis assumes all 150 players, coaches and staff would move to South Carolina, they would spend all their wages in the state, all the construction expenses would be spent in South Carolina and that the complex would be on par with one of the NFL's most popular franchises, the Dallas Cowboys, according to the report.

Harpootlian paid for the report compiled by Rebecca Gunnlaugsson, a private economist who was chief economist for the state Commerce Department from 2009 to 2011.

"I'm questioning a bill that I don't know the specifics on and no one in this chamber was involved in the negotiations," Harpootlian said.

Harpootlian said if he gets answers for the governor, even if he doesn't like them, he will remove an objection to the bill so it can come up for a vote. The bill passed the House 90-25 on March 26.

A new practice facility is critical for Tepper because the team had to practice late last season in a hotel ballroom because its current practice fields in downtown Charlotte, North Carolina, are not covered. Tepper hasn't spoken publicly about his plans since the meeting.

South Carolina is offering tax credits and to help pay for a new $40 million exchange on Interstate 77 to get the team to move its headquarters and practice fields. McMaster has said he thinks the team would build an entire complex that includes hotels, restaurants and other entertainment options near Fort Mill, about 15 miles (25 kilometers) south of where the team plays its games at Bank of America Stadium.

McMaster stands by the analysis conducted by the Commerce Department. Spokesman Brian Symmes said the agency has brokered deals that have brought 28,000 new jobs and $8.6 billion in investment to the state in the past two years.

Harpootlian was joined in his skepticism by one of the more conservative members of the Senate, Republican Chip Campsen of Isle of Palms.

Campsen said throwing incentives at anyone made sense last century when the state couldn't get companies to come. But it makes no sense now in a state that added 1 million people in the past 20 years.

"We don't have to bribe people to move to paradise," Campsen said.

Harpootlian sent his letter to the governor one day before Panthers players, coaches and the mascot Sir Purr were scheduled to meet with lawmakers at the South Carolina Statehouse and perhaps change a few doubting minds.

"I'll be happy to meet with Sir Purr, if Sir Purr has the answers to my questions," Harpootlian said.

"Sir Purr may provide the best answers you are going to get," Campsen replied.