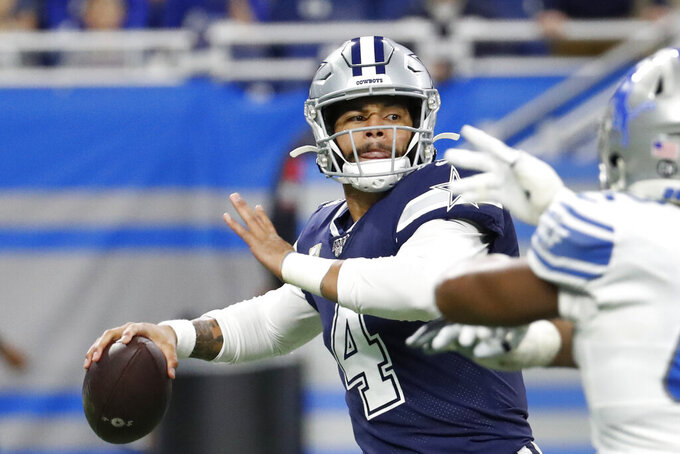 Dallas Cowboys quarterback Dak Prescott (4) is pressured during the first half of an NFL football game against the Detroit Lions, Sunday, Nov. 17, 2019, in Detroit. (AP Photo/Rick Osentoski) 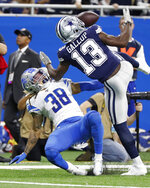 FRISCO, Texas (AP) — Dak Prescott and the Dallas Cowboys are alone in first place in the NFC East again after another strong showing from the quarterback who’s having a breakthrough season three years after he was the NFL Offensive Rookie of the Year.

Now they get to play the team that helped restore sole possession of the division lead: defending Super Bowl champion New England, which beat Philadelphia while the Cowboys (6-4) won at Detroit.

It’s the start of a season-defining stretch of five consecutive games against teams that either have a winning record or made the playoffs last season.

“I’m not going sit here and live too much on this performance,” Prescott said after his third 400-yard game of the season, a 444-yard showing with three touchdowns in a 35-27 victory over the Lions.

“We’re going to close this book, and the next opponent is a very, very good opponent, so I have to keep playing like this and put our team in a position to win games.”

Questions persist about the defense after Jeff Driskel, subbing for injured quarterback Matt Stafford, had the Lions with a first down inside the Dallas 35 late in the fourth quarter of an eight-point game. Dallas forced a punt from near midfield and ran out the clock.

“We’re good; we’re fine,” linebacker Leighton Vander Esch said. “We got to focus on doing our individual job ourselves first, before we start worrying about everybody else’s stuff.”

The Cowboys had a pair of 100-yard receivers for the second consecutive week, and that was with top target Amari Cooper held to three catches for 38 yards. Michael Gallup had nine catches for 148 yards, with six for 113 before halftime, and Randall Cobb finished with four catches for 115 yards and a touchdown.

Two-time rushing champion Ezekiel Elliott has been held to less than 50 yards in consecutive games for the first time in his four-year career. There’s no question teams are sticking to the formula of stopping Elliott first. The question is, how much longer will they let Prescott have his way?

Pass-catching backs. Elliott made a leaning catch that almost knocked him off his feet but kept his balance on a 17-yard touchdown on a screen. It was just a few days after Elliott said the Cowboys hadn’t been committed enough to the screen game. Tony Pollard gave Dallas its first lead by taking an underneath pass 21 yards for a score.

Punt returns. Tavon Austin had a tough day with just two yards on two returns, including one for minus-6 yards that pinned the Cowboys at their 15. Jamal Agnew set up Detroit’s second touchdown with a 32-yard return.

DE DeMarcus Lawrence stayed down for a bit after taking a shot to his right shoulder on a tackle. He eventually walked off and returned to the game. Cooper, whose knee injury is that latest ailment in a season full of them for him, was in and out of the game.

2 — The number of times Prescott could have been intercepted by Darius Slay on consecutive throws with the Cowboys leading 27-21 on a drive that ended with their final touchdown.

Austin made a good defensive play on the first, knocking the deep throw as Slay tracked it. The second was a high pass through the fingertips of a leaping Slay, and Cooper caught it for a 16-yard gain.

“I’m not going to lie. I held my breath for a second,” Prescott said. “But it was high enough, and Coop stuck with it.”

All season, the Cowboys have dealt with the question of whether they could beat winning teams consistently. They’re about to find out. Three of the next four opponents are above .500 at the moment, and the other is defending NFC North champion Chicago.