Scoring down, home-field struggles among 1st half NFL trends 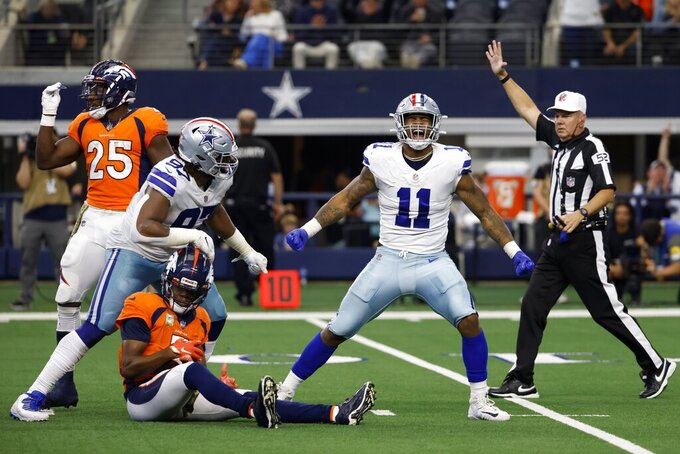 Scoring is down, home-field advantage hasn't returned even if the fans have, and the AFC could be in a wild race for playoff spots.

As the NFL gets set to start the second half of its 18-week season, there are a few notable statistical trends to pay attention to, with the two most notable being the reduction of scoring and home-team struggles.

Points per game have dropped by nearly two points per contest per team so far this season as a marked increase in offensive penalties and a small decrease in passing efficiency has taken a toll.

While some of those pre-snap penalties could be because of the return of fans, the sold-out stadiums have not made life more difficult overall for road teams and reversed the trend from last season when home teams had a losing record (127-128-1) for the first time since the merger.

Instead, road teams have gotten even better in 2021, finishing the first half of the season with a 70-64 record (.522), not counting two games played in London when the designated “home” team won.

This trend started in 2019, when home teams posted a .518 winning percentage for the lowest mark in the NFL since 1972.

Here are some others:

The standings are tight at the top of the AFC with nine teams with exactly five wins, including all four in the AFC West.

Tennessee (7-2) and Baltimore (6-2) sit at the top of the conference, but the 11 teams with winning records through nine weeks matches the most in NFL history. The only other time that happened was in 2014.

That season ended with six AFC teams getting double-digit wins and four missing the playoffs despite posting winning records.

With five quarterbacks selected in the first round of the draft in April, rookie quarterbacks figured to be a story line in 2021.

Three of them stepped in as Week 1 starters, with No. 1 pick Trevor Lawrence getting the job in Jacksonville, No. 2 pick Zach Wilson taking over for the Jets and No. 15 pick Mac Jones winning the job in New England.

No. 11 pick Justin Fields became the starter in Week 3 for Chicago, while No. 3 pick Trey Lance and third-rounder Davis Mills have gotten starts because of injuries to starters in San Francisco and Houston.

In all, the rookies have made 34 starts for the second-most ever through nine weeks of a non-strike season, compared to the 41 in 2012 in a class headlined by Andrew Luck, Russell Wilson and Robert Griffin III.

While that trio made the playoffs as rookie starters, only Jones has his team in position for a playoff spot at the midpoint this season.

The rookies have combined for a 10-27 record as starters, with Jones earning half the wins. Lawrence, Wilson, Fields and Mills have four of the worst six passer ratings among 33 qualified QBs.

The increase in fourth-down tries to a record pace so far this season have made both comebacks more prevalent and blowouts more common.

There have been a record-tying 41 games won by teams that trailed in the fourth quarter so far this season, matching the most through Week 9, previously done in both 1989 and 2012.

There have been a record 35 games with the winning score coming in the final two minutes of regulation or overtime, and 13 that have gone to an extra period, tied for the fourth most.

The willingness of coaches to go for it on fourth down has helped lead to many of those thrilling finishes, but when that strategy doesn't work, it can lead to more lopsided results. That has contributed to the 24 games decided by more than 21 points, the second-most through nine weeks in the past 40 years, after 26 in 2009.

Six teams have already matched or exceeded their 2020 win total, led by Dallas, which has gone from 6-10 a year ago to 6-2 this season.

The Bengals (5-4) have already won one more game than last season and are in the playoff hunt in the AFC, and Atlanta (4-4) is currently in seventh position in the NFC after a 4-12 mark in 2020.

The other one of those teams in contention is the Broncos, who at 5-4 have matched last season's win total.

Jacksonville (2-6) and the Jets (2-6) have gotten there based on how bad last season was, when the Jaguars won one game and New York won two.